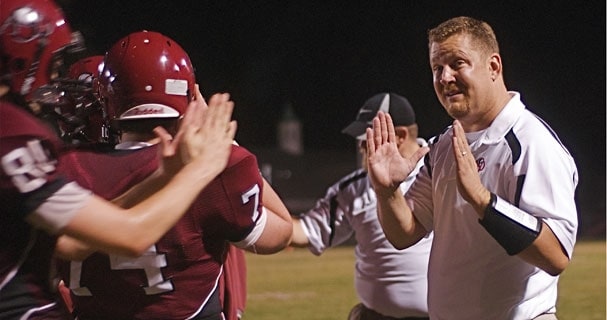 Paul Kulick, head coach of the Silent Warriors, discusses a play in sign language with the team. The Alabama School for the Deaf, billed as “home of the champions” and winner of four national football titles against hearing and non-hearing teams, is one of only 30 deaf high schools in the US playing 11-man football.(Photo by Carmen K. Sisson/Cloudybright)

TALLADEGA, Ala. – The Silent Warriors aren’t a big football team. They’re not a heavy team. Only five of the 33 players tip the scales at more than 200 pounds, most at considerably less, but they’re light and they’re quick.

The shady, oak-strewn campus sits in the heart of downtown Talladega, Ala., a city known mostly for its international speedway. But it is heavily influenced by the presence of the 150-year old Alabama Institute for the Deaf and Blind (AIDB), of which the ASD is a part.

The institute began as a school for the deaf and hard of hearing and expanded to include students ages 3 through 21 who are blind or vision-impaired. Local restaurants offer menus in Braille. Churches and businesses have deaf interpreters. The fire department provides strobe smoke alarms. Every aspect of life in Talladega and at AIDB is geared toward helping residents live independently.

Some students attend class and return home in the evenings, while others live in dorms. They learn everything from math and history to preparing meals, washing clothes, and socializing in a college-like environment. Afternoons and weekends belong to athletics, with more than 60 percent of the school’s 112 students participating in one of six sports: football, basketball, volleyball, track, soccer, and cheerleading.

But on Friday nights, in a state where there are two religions, football and football, there’s only one game in town – ASD’s weekly matchup. Every week, fans flock to the stadium to see the Silent Warriors trounce their competition and prove something you’ll hear a lot around here: Deaf people are like everyone else; they just can’t hear.

The drumbeat of champions

As you enter the stadium, two things are immediately apparent – the Warriors are winning and the game is loud. Though the players can’t hear them and 70 percent of the fans can’t hear either, they chant with the cheerleaders anyway, stomping their feet against the metal seats and keeping rhythm with the drum, an integral component not only of deaf football, but deaf culture.

The game flows smoothly. ASD head coach Paul Kulick sends plays via sign language to the quarterback, who signs them to players in the huddle. Someone on the sideline then bangs the snare drum, which the players feel, and the play begins. At times, deafness becomes a strategic advantage. Since no offensive play can begin until Mr. Kulick signals for the drum sequence, he controls the tempo – even when the opposing team has the ball.

Yet problems arise, too. When the Warriors are playing another deaf team, the opponents can interpret the plays Kulick signs from the sidelines. So in these games, he sends in plays by number, which the quarterback translates by looking at a wristband. Hearing teams can be just as nefarious. Kulick says they sometimes hire interpreters to read his signals, forcing the team to resort to the wristbands.

Ordinarily, the snare drum also signals referee calls and other key elements of the game. But Kulick has decided to see how the players perform tonight without it. Last week, vibrations from fireworks at the nearby motor speedway left the players confused. The double-wing formation the team prefers doesn’t require the drum, anyway, and it sometimes messes up the line, because not all players can feel it well.

All my life I’ve played football. It’s the only sport that involves both mind and spirit. I know what the kids are going through. It’s easy to discuss with them, because I’ve had that experience. … People think the deaf can’t play football. They’re really surprised when they play us. ~ ASD head coach Paul Kulick

If the scoreboard is any indication, Kulick’s hunch is right – they don’t need it. It’s the beginning of the second half, and the Silent Warriors hold a 24-8 lead over Frisco City. Considering the two schools’ records – ASD is 4-2 and the Whippets are 1-5 – that’s not entirely unexpected, but there are other factors to consider. Frisco City is bigger, stronger, more physical. They’re a hearing school, one of four the team will face this year.

A flag is thrown, and Kulick looks back and forth between the referee and assistant coach Chris McGaha, the only member of the coaching staff who is not deaf. Kulick signs a question to Mr. McGaha, then nods and looks at the players on the field, yelling and stabbing the air with his hands: “Pay attention!”

Two quarters later, he can breathe more easily. The Silent Warriors have spoken, upping their record to 5-2 with tonight’s 30-20 win.

Unlike his team, Kulick remembers a time when there were no pagers or BlackBerries, a time when deaf schools like the one he attended in North Carolina were traditional institutions with silent hallways and teachers who signed in English instead of using the more expressive American Sign Language, which conveys concepts rather than individual words.

“It was very boring,” he says, as McGaha translates.

It was the same way at home. His parents could hear, and though they could communicate with English and unique family signs, the breadth and depth of the world was squeezed through a narrow parameter of vocabulary. The word “hit” in signed English held no semblance to the intensity of “tackle.”

It gave no sense of the jarring crunch of helmet to body, but Kulick hadn’t learned American Sign Language and neither had his parents. There was no other word they could use. He found his voice as a quarterback.

“All my life I’ve played football,” he says. “It’s the only sport that involves both mind and spirit. I know what the kids are going through. It’s easy to discuss with them, because I’ve had that experience.” His hands become a blur as he talks about his team. “We have many speedsters,” he says. “We’re like a factory here. We produce them. People think the deaf can’t play football. They’re really surprised when they play us.”

Kulick likes that, but then, he likes everything about the game. He looks around the locker room and inhales the sweat-drenched air. “Smell that? I really love that stink,” he says, laughing. “I still love that stink. It brings back so many memories. It just feels good.” His wife, who is also deaf and has been waiting patiently by the door, wrinkles her nose and laughs. He can wax philosophical about the finer attributes of perspiration next Friday. For now, it’s time to go home.

The season is over, and ASD finished an impressive 6-3, but the players are still talking about Frisco City. They are shy at first, elbowing each other and giggling slightly. Justin Carter is a wiry coil of nervous energy, perched on the edge of his chair.

Beside him, Kwentavious Boyd is playing it cool as he slouches in his seat and buries his hands deep in the pockets of his oversized football jacket. Jerrod Cunningham leans forward and intently watches their interpreter, who can barely keep up as they start, interrupt, and finish one another’s sentences. “They [Frisco City] thought, ‘Poor little deaf team,’ ” Carter says, grinning.

We have a brotherhood even after the season ends. We have fun together. ~ Justin Carter

“ ‘Poor little deafies,’ ” Boyd interjects. “But we whooped ‘em. It was exciting to prove we could.”

On and off the field, the players think their shared experience of being deaf, plus living together at the school, gives them a bond many other high schoolers don’t have. “We have a brotherhood even after the season ends,” says Carter. “We have fun together.”

As graduation looms, they’re headed out into the world, away from the security of their brotherhood. But as they tease one another, hands slapping shoulders and cuffing heads in the common language of all athletes, the bond they’ve made is evident.

Frisco City, they say. That was a great game. The best.