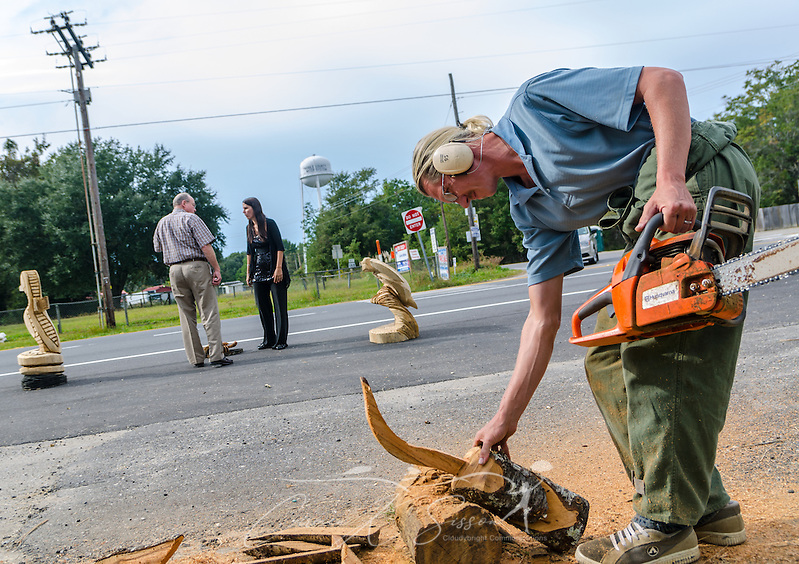 Alabama chainsaw artist James Seal carves a whooping crane as his wife, Miranda Seal, tries to sell his artwork to a bystander in Coden, Ala. The couple says they need health insurance, but they have not yet explored their options through the Obamacare health care exchange. (Photo by Carmen K. Sisson/Cloudybright)

CODEN, ALA. — James Seal takes his foot off the log and steps back, both to admire the whooping crane taking shape beneath his chain saw and to shift the Husqvarna so that maybe he can finish the sculpture before dark. He wears protective glasses and headphones, but there’s not much he can do for his ailing back.

Mr. Seal and his wife, Miranda, are among the 16 percent of Alabamians who lack health insurance. But they’re not rushing to enter President Obama’s marketplace. News media focus on the website glitches, plus cautionary tales from friends and family, has dampened their enthusiasm. They haven’t even visited HealthCare.gov to window-shop.

Last year, when Seal left his job as an insulator at shipbuilder Huntington Ingalls Industries in Pascagoula, Miss., he said goodbye to his Blue Cross Blue Shield plan. Since then, the Irvington, Ala., couple, both in their 30s, have paid cash for medical care or visited the hospital emergency room. But mostly, they’ve gritted their teeth through health challenges. It is a strategy that has worked for the most part. 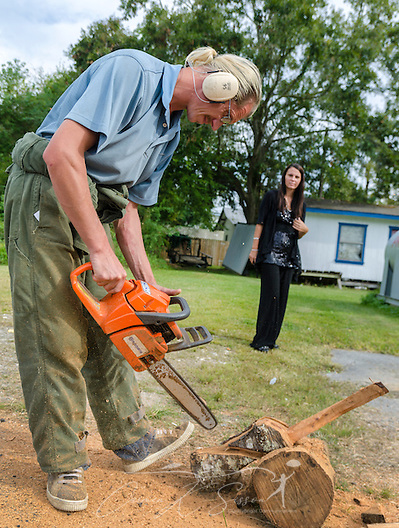 Today, the Seals are camped out near an abandoned hardware store here in Coden, hoping to catch the attention of tourists headed to Dauphin Island. As Seal stoops over his log, carving the crane’s wings, his wife tries to convince a businessman to buy a sculpture of a sea turtle. At $65 to $350 per piece, Seal’s art allows the couple to make a living. But September was awful – so much so that he is considering giving up his dream to be a “chain-saw artist” and returning to the shipyard.

Like other Americans, the two feel they are one catastrophic event from financial ruin. They are not eligible for Medicaid, and because Republican Gov. Robert Bentley rejected an expansion of the program (along with 24 other state governors), that’s unlikely to change.

From what Seal has heard of the Affordable Care Act, or “Obamacare,” he doubts he will find a plan he can afford – if he can get onto HealthCare.gov at all. Most people he has talked to either haven’t been successful or didn’t like what they saw when they finally made it inside.

“It’s a person’s choice,” Seal says. “We should all be responsible for our own health care, and if a person doesn’t have enough motivation to do whatever it takes to make ends meet….” His voice trails off and he stares at his shoes.

The businessman walks away, leaving behind the sea turtle and Miranda’s sales pitch.

“Still, if health insurance turns out to be affordable, it would be stupid for me not to check it out,” Seal says.

For now, he is riding on faith. Beside him are the tools of his trade and, resting between the sandpaper to smooth rough edges and marbles used for his animals’ eyes, a Bible.

“I don’t think about those catastrophic things,” he says. “I’m just working every day to make it.”