Home Recent Bylines Are we asking too much of Houston’s volunteers?

Are we asking too much of Houston’s volunteers? 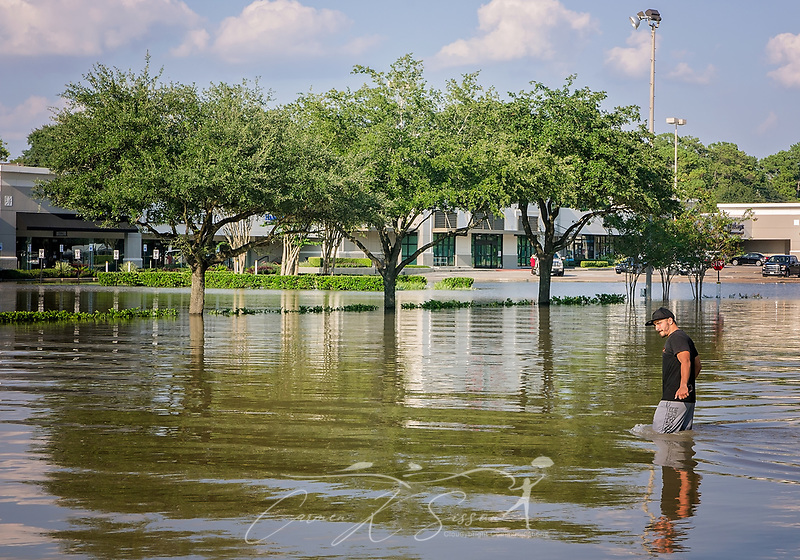 A man walks through flood waters on Memorial Drive, Aug. 31, 2017, in Houston, Texas. Volunteers have streamed into Houston all week, sacrificing their time, money, and safety to help those affected by heavy flooding following Hurricane Harvey. (Photo by Carmen K. Sisson/Cloudybright)

HOUSTON and ATLANTA —Susan Keays stands at the water’s edge and shades her eyes to better see an approaching boat. As she holds her cellphone, verifying an address, she quickly counts heads. One volunteer is missing. This morning, they were strangers. Now, they are a sort of family.

She is on Memorial Boulevard, where kayaks and bass boats bob in a river that shouldn’t be. At first, she came to the edge of the flood to save horses. She is staying to save people.

As a volunteer, she’s amid the jumble of people trying to help the makeshift rescue crews stay safe themselves.

By profession, she is a business consultant. But on Memorial Boulevard, her face streaked with sweat, she exhorts rescuers to wear life jackets, gauges the stream depth, and cooperates with local law enforcement as boats disperse.

“You could cause someone else harm, trying to save you,” she explains. 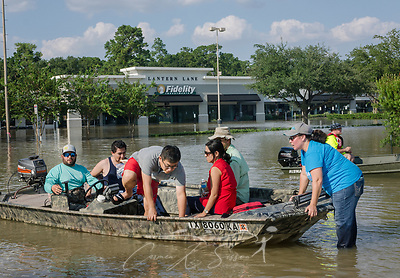 Susan Keays, 49, guides a boat of volunteers as they leave to assist trapped families along a flooded Memorial Boulevard, Aug. 31, 2017, in Houston, Texas. (Photo by Carmen K. Sisson/Cloudybright)

Volunteers helping volunteers save lives. If there has been a theme to the first few days after the 50 inches of rain from hurricane Harvey last weekend, that has been it. Call it the Dunkirk-on-the-bayou: the thousands of heroes of Houston. They are not deputized and trained rescuers. They are salesmen, entrepreneurs, teachers, and mechanics.

And as America witnessed another Katrina-like disaster – the flooding of an estimated 30 percent of America’s fourth-most-populous city – civilian responders have shown an unfettered nimbleness, a rising spirit of can-do-ism, and a self-reliant spirit that helped a government overwhelmed by the storm’s human impact.

The question is whether the civilian army that showed up in Texas is a sign of what’s right or what’s broken.

So far, there has been no Katrina-like wave of criticism for the federal response. Earlier in the week, Texas Gov. Greg Abbott gave it an “A.” Volunteers, it seems, have simply helped the government deal with a disaster of tremendous scope.

But the challenge of relying so heavily on volunteers comes into focus when their cellphone communications crackle with the question, “There’s looters, should we shoot ‘em?” – as happened this week. Or when volunteer rescuers themselves die, as happened when two were electrocuted by a downed wire. How much is it right to ask of Good Samaritans?

To some, the Harvey response bespeaks a lack of government commitment. But to others, it is an echo of an ethic that existed when the federal government loomed less large.

“Remember, there was no federal response to the Great Molasses Spill” that killed 21 people in Boston in 1919, says Northeastern University political scientist Daniel Aldrich, author of “The Power of the People.” “The civil defense era, starting in the 1940s, began to change that, and it pendulum-swung into the Cold War, where everyone began to assume that someone is going to take care of them – and it would be the central government, not friends and neighbors. Now, hurricane Harvey will push the discussion of the government’s role in disasters back into the spotlight.”

The effects of that shift have been on vivid display here in Houston.

“It makes you proud to be a human to watch that work,” says Bill Moore, the CEO of Zello, the app used to coordinate much of the Houston response. “You hear real, live stories [on the rescue channels]: ‘Hey, there’s a dog and three kids and they’re on the counter,’ and you can hear people whooping when help arrives.” 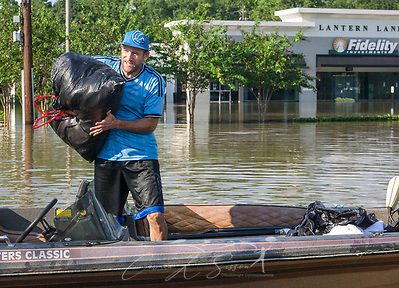 “The fact that everyone is out there in their bass boats helping people get out is a silver lining of this tragedy,” says Houston resident Mark Jones, a political scientist at Rice University in Houston as he triages emergency shelter for storm survivors.

The response to Harvey has already suggested a change in national readiness and disaster outlook from the all-government approach of civil defense era to a more flexible post-9/11 volunteerism.

It’s in part enabled by a Federal Emergency Management Administration that has abandoned strict top-down bureaucracy – a post-Katrina strategy to avoid overall failure when federal resources are overwhelmed.

In that way, to some, the response offers a way forward.

Civilian involvement in rescue “is not a substitute for government doing its job, nor should it be, but it gets to this notion of a civil society, of people not just waiting around for government to do everything – that notion is the greatest savior of our country, going forward,” says former Tulane University President Scott Cowen, a Katrina evacuee and author of “The Inevitable City” about the resurgence of New Orleans.

Politicians, parties, and federal agencies “come and go, but we live in these places, we’re here for a lifetime, so let’s fix it ourselves,” he says. “I love the stories of these faceless heroes: You don’t know their names, but they’re out there, in the thousands.”

Scott Sherman is one of them. A Houston resident, he decided to volunteer after seeing the flood footage on television. At the moment, his problem is that every boat is already stuffed with rescuers. He went out on one trip, but the water was too shallow and they had to abandon the rescue.

But he hasn’t given up hope. He bounces from group to group with indefatigable enthusiasm.

On one of the chats you heard, ‘There’s looters, should we shoot ’em?’ Someone yelled back: ‘No, you can’t shoot ’em!’ Some of the [rescuers] are not trained, and you can hear that in their voices. ~ Bill Moore, Zello CEO

“Do you need help?” he calls to approaching boaters. They shake their heads and he waits for his next chance.

“On one of the chats you heard, ‘There’s looters, should we shoot ’em?’ ” notes Moore. “Someone yelled back: ‘No, you can’t shoot ’em!’ Some of the [rescuers] are not trained, and you can hear that in their voices.

Moments later, it comes. He grins as he slings bags of wet clothes from a truck.

For the rescuers out on the boats, smartphones have offered some measure of coordination, with different volunteer crews talking to one another.

“It has been so effective, where you have thousands of boats and trucks coordinated,” says Zello’s Mr. Moore. “It’s fascinating. You can listen to how it’s all resolved, and it’s all live, with real lives at stake and real risk. At that scale and with the help and coordination [of government], you see the better half of human nature emerge.”

In some cases, however, the communication has only highlighted the challenges that a volunteer rescue force faces.

Part of the risk is when you have helpful individuals in effect pretending to be professionals.

Where Feds fail, volunteers step in

Is this how it should be? Some say it points to a failed federal response.

“The federal government took their hand off it and went off to fight terrorism – and each time we have a Sandy or Harvey, the solution is different,” he said. “It’s cooked up locally by the state.”

At the George R. Brown Convention Center in downtown Houston, there are signs of confusion. Some volunteers are turned away when they are desperately needed. Other volunteers are first-timers, with more-experienced volunteers jockeying for leadership.

The biggest danger now is the sunshine. People start to feel like everything is normal again — and it’s not. ~ Volunteer James Hahn II

But that’s not bothering James Hahn II too much. As long as work is getting done and people are being helped, that’s all that counts, he says.

He had been actively involved in the social-media aspect of the disaster, but Monday he realized he had to do more. The first day he came to the convention center, he was told there were enough volunteers and he was not needed. So he returned Tuesday.

Now he’s sorting endless bags of donated clothing, separating it by gender and size. Being here has meant missing his son Fulton’s sixth birthday. He did his best to explain and promised they would celebrate later, when the waters have receded. But until then, he will show up at the convention center every day and lend his hands wherever they are needed.

“The biggest danger now is the sunshine,” he says, squinting as he surveys the hundreds of evacuees milling around the convention center, waiting for assistance.

“People start to feel like everything is normal again – and it’s not.”