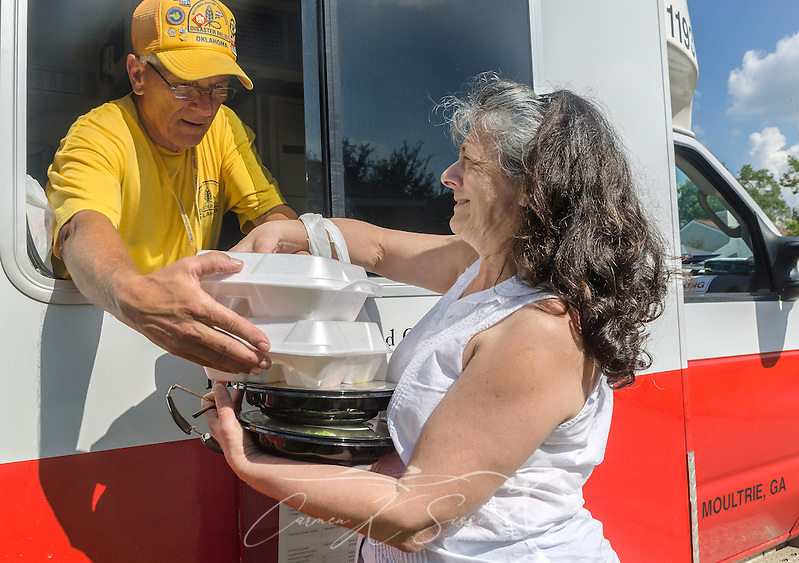 BATON ROUGE, La. – Jerry Ritter’s Tuesday began at 4 a.m., but he was still brimming with enthusiasm as the sun slipped low, closing another day of flood relief in Baton Rouge, La.

Ritter, a member of Blackgum First Baptist Church in Vian, Okla., arrived in Louisiana last week with other members of a Southern Baptist Disaster Relief (SBDR) kitchen crew. Though his body was tired, his heart was full. He gazed across the parking lot of Istrouma Baptist Church, watching as each trained volunteer fulfilled a vital role in getting supper—hamburgers and baked beans—to those in need. He had another mission for the evening—accompanying the American Red Cross (ARC) on meal delivery. 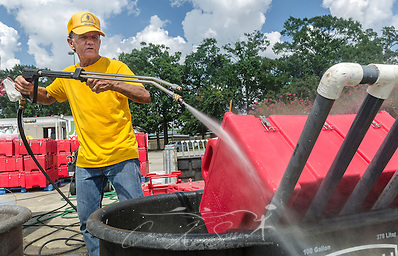 The Oklahoma kitchen crew is one of four deployed to Louisiana following mid August’s torrential rains, which killed 13 people and left 20 parishes under water. When the rain stopped, the numbers were staggering. Some areas received more than 31 inches of rain, flooding more than 60,000 homes and 76 Baptist churches.

More than 115,000 people have applied for assistance from the Federal Emergency Management Agency (FEMA). Ritter and his fellow volunteers are currently preparing 14,000 meals a day in their mobile kitchen, and, because the need is so great, there is no immediate end in sight.

It can be overwhelming, Ritter said, but working in disaster relief has taught him to trust the process and—most of all—trust God. Ritter joined SBDR in 2000. He vividly recalls one of his early DR trips to a Houston flood.

“Everything people owned was out there on the curbs, and I couldn’t see how we could get anything done,” he said. “I thought, ‘It’s so massive. What can I do?’ I learned there’s not much I can do but stand back and watch God get things done.”

Trip after trip, he finds his faith renewed. Once he finishes his kitchen duties, he tries to find time to go out into the community to meet people.

While Ritter waited for his ride with the ARC, Ken Braddock tackled a sea of red cambros—food transport crates. Braddock, a member of Meadowood Baptist Church in Midwest City, Okla., washed each crate thoroughly so it could be disinfected and filled again with the evening meal. Instead of focusing on the labor, he concentrates on the spiritual needs being met.

A few days ago, two women approached the kitchen. One pointed to the other.

“She needs a hug,” the woman told Braddock.

Braddock gave her the hug, then asked if they were hungry. The women left with four meals and another hug. 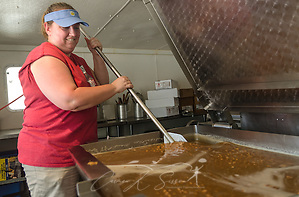 That spirit is what moved new SBDR volunteer Lesley Lowman to sign up on Saturday. Lowman, who attends Woodlawn Baptist Church in Baton Rouge, felt fortunate the flood spared her home, but she wanted to help her neighbors. So she joined SBDR. At age 39, she is one of the younger volunteers, but that doesn’t faze her.

“You learn as you go,” Lowman said, stirring a vat of beans with a long paddle. “The need is so great, and it’s right in my backyard.”

Driving the streets of Baton Rouge, the need is apparent. Life is slowly getting back to normal in some places, but the majority of streets hold deep pockets of pain. In these areas, SBDR volunteers are greeted with smiles, tears and heartfelt gratitude.

Baton Rouge resident Pat Thomas, a member of Healing Place Church, was among several people who came to the curb when the ARC truck arrived with Ritter aboard. The truck’s intercom chattered, fighting for attention against whining saws and staccato hammers. “This is the American Red Cross! We have hot food!”

When the waters began to rise, Thomas fled with her children to shelter in Prairiville, La. She did not know that they, too, would soon be surrounded by water—sitting on an island of worry.

Cell service was sporadic, but the little news she heard did not sound good. Her neighbors were rescued by boat. Almost everyone she knew had lost almost everything they owned.

When she finally made it back to her house, she made a startling discovery—out of 80 homes in her neighborhood, seven had survived. Hers was one of them. The water had lapped the threshold but gone no farther.

Immediately, she turned her attention to her neighbors, taking in those who had been displaced. Most of her houseguests have now found other arrangements, but one remains. He is working by day and trying to repair his mother’s house at night. Thomas took two meals from Ritter—one for her guest and one for his mother—and thanked him, then called out to a quiet woman shuffling toward the ARC truck. They typically have a neighborhood gathering each month, and the woman was to be this month’s host.

She was not one of the fortunate ones.

“Go on, honey, go get you some hot food now,” Thomas said, urging her toward Ritter’s waiting hands. “And make sure you get a salad. They’ve got cold salad.”

Thomas watched as the woman walked away. Some people are angry and some still cry every day, Thomas said, clutching the food containers to her chest. But she sees something else, too—a community spirit that could not be washed away.

“I believe everything is going to be okay,” she said. “There were workers out here praying before they started their day.”

Southern Baptists have 65,000 trained volunteers—including chaplains—and 1,550 mobile units for feeding, chainsaw, mud-out, command, communication, child care, shower, laundry, water purification, repair/rebuild and power generation. SBDR is one of the three largest mobilizers of trained Disaster Relief volunteers in the United States, along with the ARC and The Salvation Army.