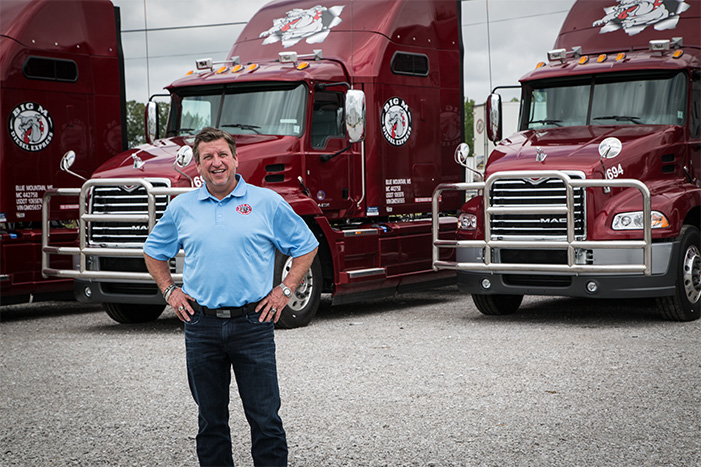 President Michael Massengill founded the company in Blue Mountain, Mississippi, in 2000, building on a family history of more than half a century in the trucking industry. His father, Lawrence Massengill, started Massengill Trucking in the 1960s and sold the company in 1997.

Our maintenance costs on these Macks are running approximately 3.8 cents per mile. Downtime is virtually zero with them. Downtime is very important and Mack has helped alleviate that. ~ Michael Massengill, Big M president

For Lawrence’s business-minded son, one ending marked a new beginning. With just a handful of trucks, Michael Massengill began Big M, and they are still going strong today.

Big M specializes in intermodal and over-the-road heavy hauls, transporting everything from tires to paper and aluminum products. Routes average 500 miles, with drivers operating 300 trucks and 800 trailers across 48 states.

Eight years ago, Massengill switched the fleet to mostly Mack® trucks, and it was a good decision, he says. Before that, they had been running used equipment purchased during the Great Recession, and it proved to be an expensive mistake.

“They really cost us a lot of money,” Massengill says. “We had cheap payments, but the trucks stayed broken down and the maintenance costs were unreal.”

These days, the predominantly Mack fleet is running strong providing good service. But Massengill knew they could save even more money, so when he had the opportunity to upgrade from 10-speed manual transmissions to the new Mack mDRIVE™ automated transmission, he seized it, ordering 50 mid-roof 2015 Mack Pinnacle™ tractors. The fleet is comprised of nearly 50 percent mid-rise and 50 percent high-rise tractors, with a few day cabs.

The mDRIVE has been a positive move in every way, Massengill says, especially in fuel savings. His 2016 Pinnacle models average 7.6 mpg vs. 6.7 mpg for 2012 tractors with manual transmission, for a savings of almost 8,500 gallons of diesel over the four-year ownership of the truck.

“Every tenth we can improve equals a lot of dollars,” Massengill says. “That’s a lot of money. It adds up and we like that about Macks.”

He also likes the reliability, combined with the ease of mind provided by Mack GuardDog® Connect, which monitors the engine and rapidly detects problems, sending the diagnostic code to Mack’s 24/7 team of support staff and technicians. Drivers are then told where to take the truck for repairs while Mack’s OneCall customer center forwards to technicians the necessary information, including parts needed, service instructions and diagnostic information, using the ASIST case management system.

The reduction in downtime can save as much as $2,000 a day — but it is priceless when it comes to on-time delivery and customer relations.

As all truckers know, there is a driver shortage, and driver happiness is the key to retentionThat’s what we try to do — take driver input in all of our purchases and purchase trucks that are as nice as they can be. ~ Michael Massengill, Big M president

“Our maintenance costs on these Macks are running approximately 3.8 cents per mile,” Massengill says. “Downtime is virtually zero with them. Downtime is very important and Mack has helped alleviate that.”

The new trucks also serve as an effective recruitment tool. Mack has worked closely with Big M to provide the trucks they need, whether that means improving fuel economy by another tenth of a mile, adding new features to improve driver comfort or simply adding a bit of brightwork to make the trucks flashier and more appealing to drivers.

“As all truckers know, there is a driver shortage, and driver happiness is the key to retention,” Massengill says. “That’s what we try to do — take driver input in all of our purchases and purchase trucks that are as nice as they can be.”

But the main thing drivers rave about is the ease of driving and increased pulling power, he says. Recently a driver called and asked to be swapped from another brand to one of the new, more powerful Macks. His request was quickly granted.

Big M prides itself on its family-oriented philosophy, a style that meshes well with the Mack corporate philosophy. That, too, keeps Massengill returning year after year to Mack.

“The experience buying from Mack has been great,” he says. “We have a great relationship. The most important things when choosing a brand are fuel economy — that’s very important — driver comfort, dependability, dealer relationship and the relationship we have with Mack itself. I have met everyone all the way up to the CEO of Mack Trucks, and that means a lot.”