Can churches lead on racial harmony? 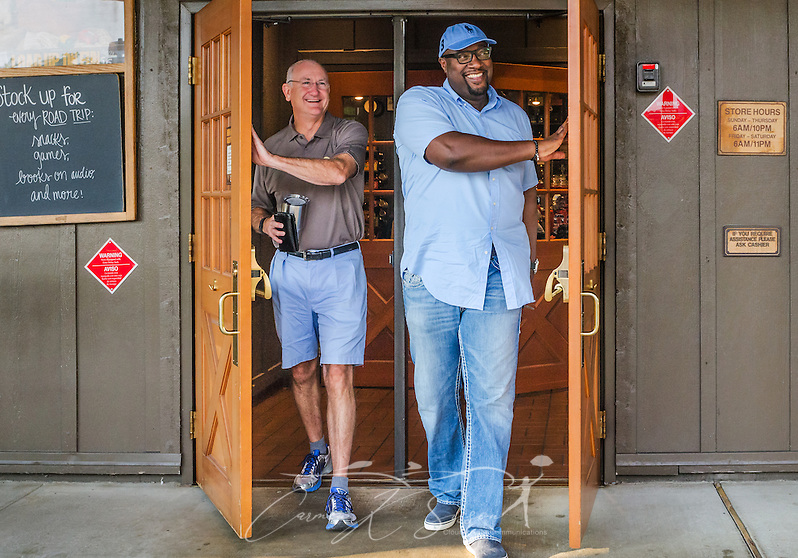 Oak Mountain Presbyterian Church Pastor Bob Flayhart and Urban Hope Community Church Pastor Alton Hardy smile as they exit Cracker Barrel restaurant after having breakfast together, July 17, 2015, in Birmingham, Alabama. Hardy and Flayhart began having weekly breakfasts together more than two years ago — a move they say has been instrumental in forming the trusting relationship needed as their congregations work together to heal race relations and foster racial harmony in Birmingham. (Photo by Carmen K. Sisson/Cloudybright)

BIRMINGHAM, ALA. — A low hum sweeps across the sanctuary, drifting above the bowed heads of huddled prayer groups, beyond the joined hands of blacks and whites. Earnest whispers carry words like harmony, unity, forgiveness, and peace. Outside, a police car idles as day fades to dusk at Oak Mountain Presbyterian Church in Birmingham, Ala.

Less than a week earlier, in a church basement 450 miles away, nine people had been fatally shot during a Bible study class at Emanuel African Methodist Episcopal (AME) Church in Charleston, S.C. But the service here on this June day is not a vigil. It is the product of a bond established months before – between mostly white Oak Mountain and the predominantly black congregation of Urban Hope Community Church.

In the aftermath of the Charleston shootings, the grace of the members of Emanuel AME – poignantly forgiving the young man who killed their loved ones – showed the power of faith in promoting racial harmony under the most trying conditions. The leaders of Oak Mountain and Urban Hope Community are persuaded that, going forward, churches have a crucial role in bringing that progress to America as a whole. 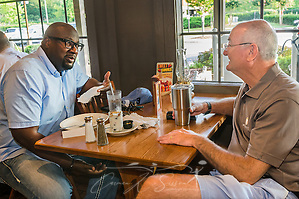 That historically has been true, from the abolitionist preachers to the reverends of the civil rights movement. In recent years, the zeal of black churches in particular to address issues of race has rekindled, driven by the rise of the “Black Lives Matter” movement.

But when the issue is not overthrowing unjust laws but addressing deeper-seated racial perceptions, what can churches do? And can churches focus society as they once did, given that many of those most likely to rally to the cause – young Americans – increasingly do not see churches as the voice of moral authority? How do you recapture the spirit of the 1960s in the grayer shades of the present?

From Arizona to Alabama, there are community projects and joint services. One majority white church in Minneapolis built apartments for 72 former convicts, most of whom were black. But the core principle is simply to get black and white Americans talking, the idea that even the most pernicious racial prejudices fall in the face of true fellowship. 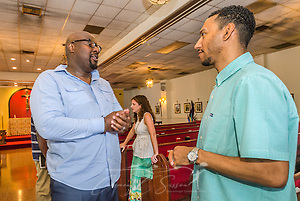 Charleston was a wake-up call. It was, in a sense, a return to the atrocities of the Jim Crow era and before: A white supremacist walked into a Bible study and killed nine men and women out of racial hatred. Unlike the recent trials of authority figures who killed unarmed black youths – which polls suggest were seen differently according to one’s racial lens – the Charleston shootings unified a nation.

“When you have victims who are so unimpeachable, it becomes very difficult to bear their deaths,” says Valerie Cooper, professor of black church studies at Duke University in Durham, N.C. The Charleston shootings “caused us to examine ourselves in a way we haven’t before. They weren’t out shoplifting; they were in a Bible study.”

For the Rev. Alton Hardy and Bob Flayhart, the goal is to maintain that unity no matter what the circumstances.

Pastor Flayhart’s 3,000-member Oak Mountain Presbyterian Church is nestled within a ZIP Code where 83.2 percent of the residents are white and 55.7 percent live in houses worth more than $300,000. Only 3.8 percent of families there live in poverty.

Less than 10 minutes away, Mr. Hardy’s Urban Hope Community Church has a congregation that is more than 90 percent black, and more than 40 percent live below the poverty level.

The two pastors meet every Thursday for breakfast and conversation, and that spark has helped the two congregations to see one another by more than skin color and ZIP Code. The churches worked with other local faith-based groups on jobs programs, sustainable business plans, children’s arts camps, and prayer walks. Oak Mountain’s parishioners have been receptive and generous with resources, offering both employment and pro bono legal assistance to Urban Hope’s members.

Urban Hope’s parishioners, meanwhile, say they aren’t interested in being “rescued.” Instead, they are looking to build “real, authentic” relationships between members of the two churches, Hardy says.

Earlier this year, the pastors rented a 280-seat theater and brought their congregations together to watch the movie “Selma.”

The fellowship has at times caused discomfort. In the beginning, the conversations were hard, and there were times, Flayhart admits, that he had to have the courage to be vulnerable and say, “I don’t know what to say. I’m afraid of saying the wrong thing. I don’t know if I should say black or African-American. Help me understand.”

That humility has been an important part of building authentic relationships. 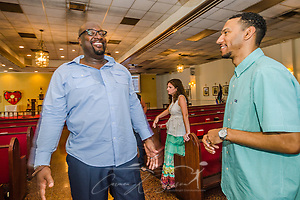 Urban Hope member Mr. Watts, who is an accountant, remembers a time in college when he was asked to house-sit in a wealthy white neighborhood. As he settled down on the couch to eat an ice pop and watch television, he saw police outside the window. When he opened the door, the officer drew his gun and told him to put his hands up and lie face down. In the distance, Watts could see two children pointing and giggling.

These are stories white people need to hear, Hardy says.

Such efforts to open lines of communication are an approach many churches are trying, from the 27-year-old Racial Reconciliation Community Outreach Network in Tucson, Ariz., to BridgeBuilders in Austin, Texas.

But there is a danger of creating a “warm and fuzzy,” superficial Christianity that feels good but accomplishes little, says Ronald Neal, assistant professor of religion at Wake Forest University in Winston-Salem, N.C.

For example, churches need to challenge themselves if they want to attract Millennials, who are keenly interested in social justice issues but are rejecting traditional churches. Polls suggest they see churches as hypocritical, not welcoming of people of other races, ethnicities, or gender identities. They also mistrust authority.

“They’re asking hard questions, looking at us, and not liking what they see,” says Sandra Barnes, professor of sociology of religion at Vanderbilt Divinity School in Nashville, Tenn. “But Millennials are there, ripe for involvement. Can we be loving enough, proactive enough, community-engaged enough, to attract them?”

If churches want to address social justice issues, they also must first move beyond the fear of a negative backlash and make a long-term commitment to a better world, says Wake Forest’s Mr. Neal. Mission work and philanthropy are good, he says, but it is not social justice unless it addresses the root cause of the problems.

Members of Plymouth Congregational Church in Minneapolis have embraced that mission. More than a decade ago, the church endured a yearlong picket after constructing a 40-unit housing complex for mentally ill and chemically dependent residents. Now, its members are working on another controversial project with numerous other churches, building apartments for 72 ex-offenders.

Incarceration rates are particularly troublesome, says church member and psychologist Theresa Voss. When she looks outside her window, she sees what she calls a “tale of two cities.” Sometimes members discussed the segregation within their own church, but though everyone agreed something should be done, no one knew what to do. The passion was present, but it wasn’t sustained.

Ms. Voss says she believes that is about to change. In January, the church appointed a Racial Justice Working Group, and more than 150 members participated in a book study of “The New Jim Crow: Mass Incarceration in the Age of Colorblindness.”

They hired a consultant to work with the congregation during the next two years, teaching members about white privilege and institutional racism. Other area churches have gone through similar programs. It is necessary for a church to examine itself, Voss says, before it can partner with an African-American church.

The book study was a powerful experience for member Mary Kay Sauter. “I just didn’t realize what was going on with the mass incarceration of black men,” Ms. Sauter says. “I wasn’t paying attention to what it actually meant. People don’t understand the stress black men live with, the whole white privilege thing. It was a whole new awareness of how the world works, reading these books.”

The lessons have become real to her through interactions with African-Americans in her community. A young black man came to church and spoke about how he always travels well below the speed limit on the freeway because he worries about police confrontations, even when he isn’t doing anything wrong.

Though she believed her Christian morals kept her from being a racist, she has come to the uncomfortable truth that while outwardly she spoke love, inwardly she felt fear. That is beginning to change.

I was taking my granddaughter to school recently, and I watched a black man crossing the street. I suddenly thought, ‘I’m not afraid of him. I know nothing about him. I have no reason to be afraid of him.’ ~ Mary Kay Sauter

“I was taking my granddaughter to school recently, and I watched a black man crossing the street,” Sauter recalls. “I suddenly thought, ‘I’m not afraid of him. I know nothing about him. I have no reason to be afraid of him.’ ”

This change of perspective is crucial to success, many say. When people on either side want to “do the right thing” but are not open to change themselves, efforts can stall.

In Birmingham, for instance, Hardy and Flayhart are taking precautions to avoid what some experts call the “white savior complex,” in which well-meaning whites inadvertently try to “rescue” their partner churches, without fully embracing their culture or experiences.

Hardy sees his church as a facilitator, helping churches like Oak Mountain by walking beside them on a journey together.

“We’re giving an opportunity for people to build real, authentic relationships with people of color,” Hardy says. “It’s not like, ‘We’re going to help you because you’re poor.’ It’s more like, ‘What would it look like for African-American Christians and white Christians to build with the common denominator of Christ?’ ”

For his part, Flayhart and the city’s other pastors are talking about race relations more than he can remember in the 26 years of his ministry.

“We have already had to face some of these issues because they were in our face,” Flayhart says. “We have a long way to go, but I’m sure there are many in the urban circles whose jaws would drop to see that in some ways, Birmingham is really ahead of some of these other cities in the news.”