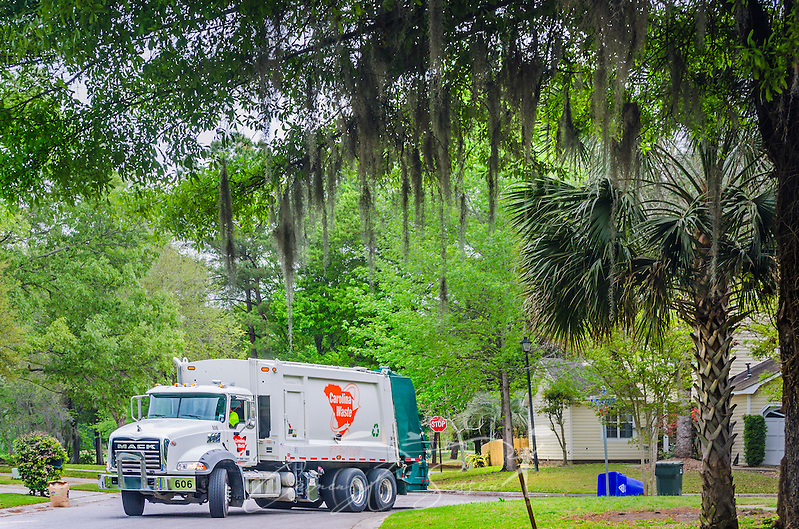 Carolina Waste employees empty trash in the Shadowmoss subdivision, April 7, 2015, in Charleston, S.C. Approximately 95 percent of the 60-truck fleet is comprised of Macks. The company was founded in 2002 and is the largest independently owned waste hauling company in the state. (Photo by Carmen K. Sisson/Cloudybright)

It is a typical morning at Carolina Waste & Recycling, and the steady rumble of Mack trucks underscores Scott Fennell’s words as he talks about the company he founded with his father, George Fennell, in 2002. Many of his drivers began their routes at 2 a.m. and are lining up to weigh their trucks; others are off to the back of the lot with refuse to be sorted and recycled.

The dedication of the employees and management team have made the North Charleston company the largest independently owned waste hauling entity in the state, Fennell says. It’s been organic growth, building upon lessons learned from the Fennells’ previous business, Fennell Container Company, which was founded in 1973 and sold to competitor Republic Services in 1995.

They started Carolina Waste “from scratch” and exceeded Fennell Container’s revenues in half the time. The company now employs 125 people, including approximately 70 drivers, with annual revenues of more than $25 million. It operates throughout coastal South Carolina. 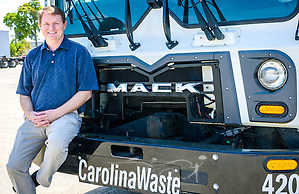 As customers launch green initiatives, Carolina Waste has expanded to meet those opportunities by gathering, collecting and sorting through light, dry waste materials at its Carolina Processing & Recycling facility. It separates concrete, bricks, blocks, metals, cardboard, plastic, tires and wood, grinding what it can and transporting the rest to the company’s own landfill.

The company handles more than 800 tons of material each day. Recycling has become increasingly popular and makes up 15 percent of the 250,000 tons of light, dry waste materials Carolina Waste collects and processes each year. As more companies move toward zero-waste initiatives, Fennell sees great opportunity for vertical growth. Three on-site grinders stay busy, with one grinding more than 400 tons of wood per month for reuse.

“Grind, shred and destroy,” Fennell says. “If a client asks us to recycle an item, we don’t ever tell them no. We find a way to make it happen.” 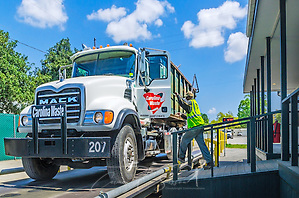 People are the backbone of the company, and Fennell says he does everything he can to ensure employee satisfaction, safety and service. He believes in offering competitive pay and benefits but also reaches out by holding monthly safety meetings where he shares industry information and asks employees for their input.

“I try to instill the philosophy of starting the day with a good attitude, and hopefully that positive message will spill out to their interactions with our customers,” Fennell says. “If you’re doing your best, even if things aren’t perfect, your customers will understand.”

Fennell says equipment reliability is equally critical to the company’s success, and that’s why they have depended on Mack Trucks for more than two decades.  Almost all of the 60-truck fleet is comprised of Mack®trucks, and the Carolina Waste maintenance department works hard to keep their trucks on the road and looking great.

“We were certainly pleased in the past with Mack Trucks,” Fennell says. “We thought they were very dependable, and they have a wonderful service center here in the Charleston area. We felt like they were the best truck in the waste-related industry. We need equipment that can get in and out of landfills even in bad weather and Mack trucks fit the bill.” 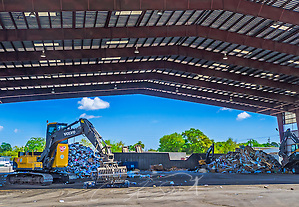 Carolina Waste has embraced advances in technology, finding it valuable for both safety and customer service.

The fleet’s trucks are now equipped with a brake retarder system to help maintain a steady speed when traveling downhill, and every truck is outfitted with a tablet-driven route management system, allowing the driver to not only record service calls but to also photograph any issues, such as overloaded containers or vehicles blocking pickup. Drivers can send the data back to the office before they even complete their route and the photos provide support for issues that might have previously been open to dispute.

Drivers perform daily pre-trip and post-trip inspections, reporting any issues so they can be dealt with immediately. Fennell says his maintenance workers have adjusted to the higher-level technology with the newer Macks and anticipates they will continue performing most of their own maintenance in-house.

Fennell relies on Bill Peek, his sales representative at Hughes Motors, Inc., in Charleston, S.C., to keep him abreast of new technologies and Mack models that may further improve his bottom line. It’s a long-term relationship built upon experience and mutual respect.

“We’ve been with Hughes Motors since the beginning,” Fennell says. “It’s a great partnership,”

Peek says it makes him proud to drive past Carolina Waste at the end of the day and see row after row of shiny Mack trucks, knowing he facilitated their purchase and that they are serving the company well. 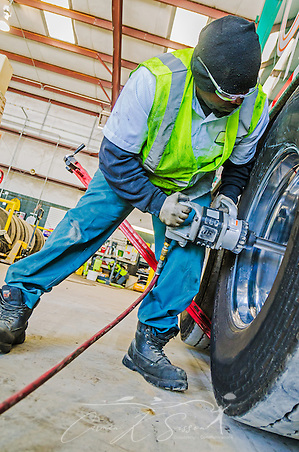 “They truly are a top-notch operation,” Peek says. “I challenge you to find another refuse company that does such a good job on maintenance. From the oldest  to the newest truck, you can hardly tell them apart.”

The biggest challenges for Carolina Waste have been not with their equipment or labor but with the rising costs of healthcare and insurance. As a result, Fennell is always looking for ways to curb the escalating costs, whether that means increasing training or adding new features to the equipment.

He is happy with the specifications of his current fleet, but he is always looking for better crash avoidance systems, improved fuel mileage, improved driver visibility and enhanced data collection.

Though he doesn’t anticipate expanding geographically, he does hope Carolina Waste continues to grow over the next decade.

For now, they are going to stick to their successful formula — great people, dependable equipment and superior customer service.

“We’re very familiar with this marketplace,” Fennell says. “We’ve grown up in this marketplace all our lives, and we know the people and know the area. I would hope to say in 10 years that we could double our size.”