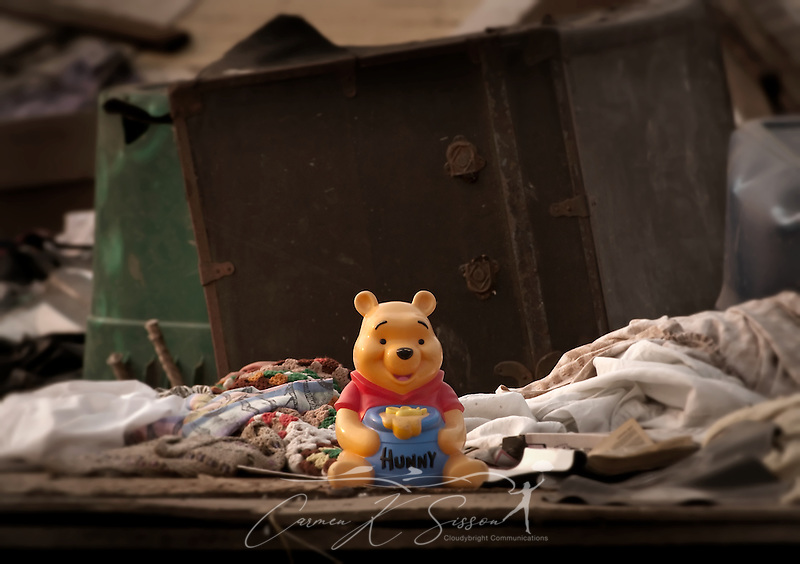 A child’s toy sits among the rubble of a demolished apartment at Rosedale Court June 4, 2011 in Tuscaloosa, Ala, following a tornado. Trained volunteers are often able to not only comfort children who are disaster survivors but also help them open up about their feelings following traumatic events. (Photo by Carmen K. Sisson/Cloudybright)

LOS ANGELES — Rachel Contreras, a caregiver for the Church of the Brethren’s Children’s Disaster Services, looked out her window towards the west Sunday morning and stared in horror at the wall of black smoke billowing less than 10 miles from her California home.

The Santa Ana winds that had awakened her were now gusting to 70 miles per hour, sending two wildfires — described by Los Angeles County Fire Inspector Frank Garrido as “blowtorches” — sweeping through the hills and canyons of Los Angeles and Ventura counties, killing two and leaving a 15,000-acre swath of destruction as of Tuesday afternoon.

Contreras hadn’t gotten the phone call from her supervisor yet, but she didn’t care. She looked out the window again. Television reports indicated her area was out of danger, and though many roads were closed, she could make it to San Fernando High School, one of four shelters opened by the American Red Cross.

Frantically, she ticked items from her list one by one. Play-Doh. Check. Coloring books. Check. Watercolors. Check. Puzzles. Check. For the hundredth time, she was grateful she always kept the blue suitcase packed with her Kit of Comfort. It made it easier to get to disaster scenes quickly.

As she walked into the shelter, she was greeted by a familiar sight. Worried adults stood in a daze, eyes glued to the television, hoping to hear good news. Nearly four dozen children wandered the room restlessly, looking for something to do amidst the sea of cots and sleeping bags.

The children are generally frightened and confused because they’re away from their routines. Everything that’s familiar is torn from them. Our volunteers are specially trained to be a calming presence for the children so they can play out some of their concerns about the fire. ~ Judy Bezon, Church of the Brethren

Some families had been fortunate enough to have time to pack their most cherished possessions, but many had fled with only the clothes on their backs. There hadn’t been time to gather toys.

That’s why the Church of the Brethren’s Children’s Disaster Services caregivers — required to attend 27 hours training — come prepared. Volunteers like Contreras, and the other five who joined her at San Fernando, bring toys meant not only to entertain, but also to give children a way to express their feelings about the disaster.

“The children are generally frightened and confused because they’re away from their routines,” says Judy Bezon, associate director for Children’s Disaster Services. “Everything that’s familiar is torn from them. Our volunteers are specially trained to be a calming presence for the children so they can play out some of their concerns about the fire.”

COB currently has six volunteers at San Fernando, but as the roads clear, Bezon says they hope to make it to the other three shelters.

Other faith-based disaster response organizations spent Tuesday afternoon in meetings, waiting for the situation to stabilize so needs assessment teams can begin canvassing the affected areas.

It can be frustrating. Becky Purdom, volunteer program manager of the Christian Reformed World Relief Committee, says CRWRC has more than 60 area volunteers to call upon and would like to help, but expects finding the necessary financial support will be challenging this year. In 2006, CWRWC rebuilt 16 homes in California following a 2005 wildfire. Earlier this year, they were there again, assessing needs from a 2007 fire. Only time will tell if they’re able to assist with this fire.

Other disaster response organizations are still trying to determine where they are most needed. Tempie Beaman, Lutheran Disaster Response coordinator for Southern California, and Casey Madden at the Presbytery of San Fernando say they’re relieved none of their churches appear to have been affected, but they still don’t know how their members fared.

The danger isn’t over yet. The Sesnon fire, in the Porter Ranch area of west San Fernando Valley, continues to race towards the southwest, fueled by Santa Ana winds still gusting at 50 miles per hour. According to Los Angeles County Fire Inspector Ron Haralson, there has been no containment of that fire, which has destroyed 9,872-acres and is feared will spread to the Pacific shoreline.

The Marek fire in northeastern end San Fernando Valley is now 70 percent contained, and most of the area’s 1,200 residents have been allowed to return to their homes.

But for some who lived in the 4,824-acre swath of destruction, there’s nothing left. Two of Lopez Canyon’s poorest communities were hard hit, with 36 trailers at Blue Star Mobile Home Park and Sky Terrace Mobile Lodge completely destroyed.

Governor Arnold Schwarzenegger declared a state of emergency in Los Angeles and Ventura counties earlier today, and officials have requested a federal disaster declaration from President George Bush, but Kim Walz, spokeswoman for the Federal Emergency Management Agency, says until that declaration is issued for individuals, FEMA won’t be able to begin assisting homeowners. The agency is reimbursing 75 percent of eligible firefighting costs, with the remaining 25 percent to be covered by state funds.

For now, all anyone can do is watch, and wait, as firefighters continue to battle the inferno. The cause of the fires has not yet been determined.