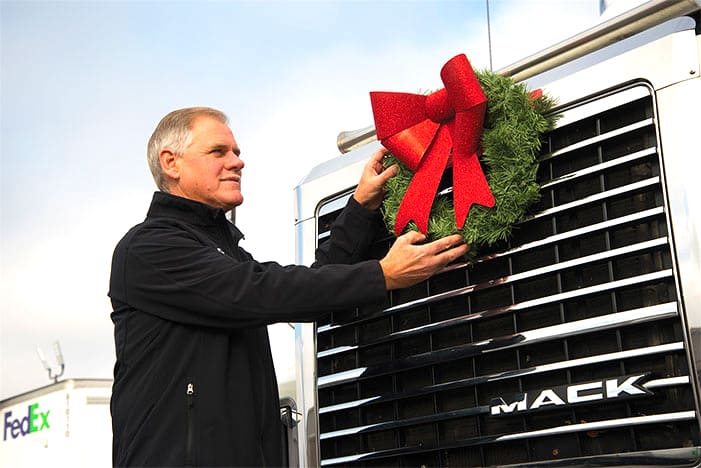 UTICA, N.Y. — JSD Express owner James De Armond believes in keeping his drivers happy, whether that means adding an extra piece of chrome to their Mack® trucks or ordering custom packages with all the bells and whistles. But he hesitated when it came to transitioning his fleet to Mack’s mDRIVE™ automated transmission.

The company, an independent contractor for FedEx based in Utica, New York, handles pickup and delivery as well as line-haul in New York, Connecticut, New Jersey and Pennsylvania. De Armond’s 27 trucks are constantly on the road, often pulling double trailers, and he worried the mDRIVE would not have the torque and power he needed.

We went out with the driver on a delivery, and when we returned, the driver cracked a huge smile. In fact, De Armond couldn’t get his driver out of the truck. ~ Tom Heiland, salesman at Utica Mack

Previously, he purchased used Macks, but De Armond wanted to upgrade and had his eye on the Mack Pinnacle™ with mDRIVE. He heard rave reviews from other satisfied fleet managers and was intrigued by the possibility of converting his fleet. His local dealer, Tom Heiland at Utica Mack, knew that if he could just get him to try the mDRIVE he would love how the truck would help him increase fuel efficiency and profits.

Before fully committing, De Armond decided to rent a Mack Pinnacle Axle Back model for one month. At the end of the month, he extended the lease. He liked the 70-inch midrise sleeper. He liked the way the mDRIVE handled, and he appreciated the fuel savings he got from its 445-horsepower Super Econodyne engine. With 1,760 pounds of torque, he had power to spare.

Sixteen months later, he purchased the rental. He now has six Pinnacles with the mDRIVE and 10 older Pinnacle models.

“He was a hard nut to crack,” Heiland says. “When he rented the first truck, he brought along a 30-year veteran truck driver who told me he was used to a multispeed transmission and wasn’t going to like a transmission he couldn’t shift. We went out with the driver on a delivery, and when we returned, the driver cracked a huge smile. In fact, De Armond couldn’t get his driver out of the truck.”

JSD Express in the early years

De Armond founded JSD Express in April 1990, and the first years were hard. He started out with one truck and barely made enough money the first year to make the truck payments. Now, however, he expects to close out 2015 with more than $4 million in revenue, and he anticipates growing 45-50 percent per year over the next decade thanks to online retailers like Amazon and big box stores like Wal-Mart.

Mack trucks are a key component of the company’s success, De Armond says. When JSD Express got into linehaul, he thoroughly researched the brand. It seemed like every truck he saw on the road was a Mack, and he was impressed by the Utica Mack dealership, which was less than a mile away and was always tidy and professional. He needed a fleet that was dependable, with outstanding uptime, and he wanted to handle most of the repairs and maintenance.

Mack fit the bill. Not only was he able to improve his fuel mileage from 4-5 miles per gallon to 7.5 mpg, his mechanics and technicians are also able to handle 90 percent of the ­maintenance.

His most challenging moment came when he took over the routes of a struggling company in Albany. Again, Utica Mack Trucks — made the difference. “We needed seven trucks yesterday,” De Armond recalls. “We had to rent trucks and put down huge deposits, get financing and order trucks. This was all accomplished in a short amount of time.”

We deck our trucks out a little bit so the drivers have personal pride. I want them to be happy when they come to work. When they want a new piece of chrome, I rarely say no. ~ Jim De Armond, JSD Express owner

He gives credit also to his 32 employees, 27 of whom are drivers. There is little employee turnover at JSD Express. De Armond believes he has found the secret: Pay a competitive wage, keep the drivers safe, equip the trucks with the latest technology and customize them to maximize driver comfort.

He sends daily and weekly safety messages and includes safety tips on every employee’s paycheck. The trucks are inspected each day to make sure everything is working properly, and they undergo a more thorough examination every Saturday. Drivers are given safe driving bonuses and additional bonuses linked to customer­satisfaction.

“We deck our trucks out a little bit so the drivers have personal pride,” he says. “I want them to be happy when they come to work. When they want a new piece of chrome, I rarely say no. We’re an outstanding company because we take pride in our trucks and keep them out on the road.”

JSD Express decks the hauls for the holiday rush

JSD Express is one of three independent contractors recently chosen by FedEx Ground for its FedEx names JSD Express as 2015 Entrepreneur of the Year award. But with the busy holiday shipping season in full swing, there is no time to rest on their laurels. De Armond expects to hire an additional five to seven part-time drivers and rent three more Macks to handle the 24/7 demands of the increased business.

Not every day is going to be a good day. There are some bad days, but you overcome them. I think it was the best move I ever made in my life to contract with (FedEx). ~ Jim De Armond, JSD Express owner

It’s crazy,” he says. “It seems like every year it gets busier and busier, and our system gets almost to capacity. Everything is time-sensitive, and it’s a recurring cycle. God forbid a nasty snowstorm comes.”

But for the detail-oriented, safety-first company, it’s all part of the daily demands, and their Macks give them the power to deal with anything that comes their way. “Not every day is going to be a good day,” De Armond says. “There are some bad days, but you overcome them. I think it was the best move I ever made in my life to contract with (FedEx). I have a very positive outlook for our future — I’m excited about it. I think there are going to be great opportunities for everyone.”