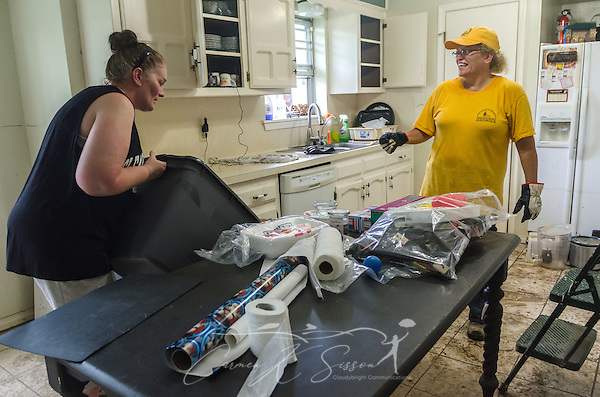 Southern Baptist Disaster Relief volunteer Kim Rowland, a member of East Dublin Dayspring Worship Center in East Dublin, Ga., helps clean the kitchen with homeowner Karen Johnson, of Immaculate Conception Church, Aug. 26, 2016, in Denham Springs, La. Rowland, along with other SBDR Georgia volunteers, is at Johnson’s home this week, helping her mud out the flood-damaged house. Johnson is among thousands of Louisiana residents affected by a mid-August flood. (Photo by Carmen K. Sisson/Cloudybright)

One by one, she pulled items from the lower cabinet – a crockpot filled with water the color of thin gumbo, fine china spattered with mud and glass baking dishes frosted with sediment.

Every day, assessors walk the streets, attempting to find the most vulnerable people with the greatest need. And every day, volunteers don their gloves and get to work, crawling around on a mud-slicked floor or hauling sodden carpet to the curb for trash pickup.

Rowland’s husband Kenny is the pastor of East Dublin Dayspring Worship Center in East Dublin, Ga. When they got the call for assistance, they knew they had to answer.

It was the same for Shornden McCloud, a member of Northside Baptist Church in Brunswick, Ga. He has volunteered with SBDR for more than a decade and didn’t hesitate to lend a hand. But it wasn’t always that way, he said as he slammed a hammer against a doorframe, trying to loosen the nails.

He went through training, but for a long time resisted going on a call.

“I always had an excuse,” McCloud said. “I was more concentrated on my job. But after that first time, you’ll go every time. It’s a lot of work, but once you see what you’re doing for the Lord, once you see what this does for the people, you can never not go again.”

The Louisiana flood is a massive disaster, stretching 160 miles west, from Hammond, La., to the Texas border, then an additional 40 miles to the north and south. More than 115,000 people have applied for assistance from the Federal Emergency Management Agency (FEMA).

Flooding was particularly severe in Denham Springs, a small community on the outskirts of Baton Rouge, La. Officials estimate 90 percent of homes and businesses flooded. Most of the city’s 10,000 residents are living in hotels or staying with family, trying to juggle work and cleanup while navigating the red tape required for government assistance.

Homeowners Karen Johnson and Phillip Carpenter, members of Immaculate Conception Church of Baton Rouge, are all too familiar with trying to balance daily life with recovery.

Carpenter, a crane operator, was working in Tampa, Fla., when the flood began. At first, he and his wife were not concerned. Their previous house was on a river, but after it flooded the third time, they moved to their current neighborhood. The area had never flooded. They felt sure they had found the perfect spot for their growing family.

Johnson wasn’t worried until a friend called and said she was evacuating. Street flooding quickly rose to ankle-deep. Thirty minutes later, water began seeping through the doors and bubbling up beneath the hardwood floors.

Johnson’s mother lived in a two-story house next door, so she took her three children and grandchild and fled to safety. The last time Carpenter made contact with them was around midnight. Two days later, he arrived from Tampa and tried to get to his house. He made it as close as two miles, but the water was too high to continue without a boat. When the family reunited almost a week later, they learned that their house had taken on nearly two-feet of water.

Volunteers like SBDR are a blessing, Carpenter said. People in Louisiana help one another, but everyone is going through the same thing. To make matters worse, skimpy national news coverage left his boss and coworkers puzzled.

“They’re calling me every day, wanting me to come back to work,” Carpenter said. “They have no idea what we’re going through. Everything I’ve ever worked for in my life is gone. My family is basically homeless.”

It eases his stress to know SBDR volunteers have things under control, from ripping up swollen hardwood floors to removing the sheetrock, which is beginning to mold. When Carpenter returns to work, he knows his family will be safe.

“This is fantastic,” Karen Johnson said as she washed dishes and wrapped Christmas paper around the keepers. “It’s a great help. It takes a lot of worry off us, especially with all the fraud.”

It’s hard to know whom to trust, she said. SBDR is a comforting presence. Still, the devastation takes an emotional toll on not only the homeowners but also the volunteers.

Joan Sangster, a chaplain for SBDR, choked up earlier in the day while praying with a family.

“Halfway through my prayer, I started crying,” Sangster said. “How can you not? But it rains on the just and unjust alike. Sometimes things that seem terrible might turn out to be a blessing.”

Sangster and her husband Chuck attend Calvary Baptist Church in Jesup, Ga. They became SBDR volunteers two years ago and have now made five deployments.

People often ask why God lets disasters happen, Sangster said. There is no easy answer. At 79, she has faced health challenges, but she holds fast to Romans 8:28.

Her purpose, she believes, is to help those in need.

“God is still using me, and I’m still able to do things,” she said as she carried an armful of wooden doorframes to the trash pile. “I feel so blessed that I’m able to be here doing this.”