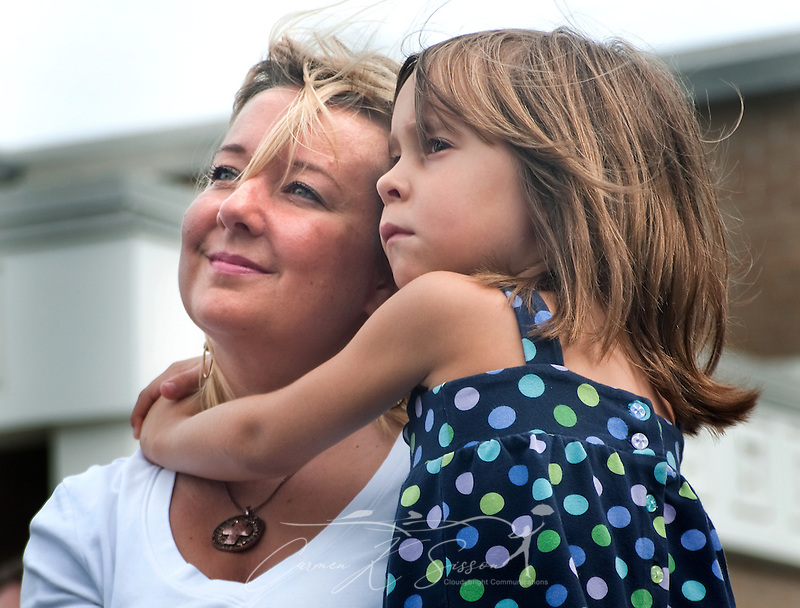 Tonya Schevers holds her daughter, Marlee Schevers, 7, during a ceremony commemorating the fifth anniversary of Hurricane Katrina Aug. 29, 2010 in Gulfport, Miss. The scope of the disaster after the hurricane changed the way faith-based organizations handle disaster response, with many moving toward a more holistic approach. (Photo by Carmen K. Sisson/Cloudybright)

COLUMBUS, Ind. — The rental trailer wasn’t in great condition before the muddy rivers spilled their banks in Columbus, Ind., but it provided a home for the family of five. The parents worked in the fields and their baby played happily on the kitchen floor in the evenings, surrounded by the chatter of the two elder siblings doing homework and the smells of supper being prepared.

Then summer came, and with it came flooding rains — 11 inches within seven hours. Levees broke. Dams failed. Much of the Midwest was left underwater, with places in Indiana seeing the worst flooding the state had experienced in more than a century.

The trailer leaked, walls were damaged, but the family had no place else to go so they stayed. But as the weeks passed following the flood, the insulation refused to dry, and mold began creeping up the walls.

Drinking water in the trailer park, polluted during the flood, remained unfit for humans, forcing the family to use its already limited funds to buy fresh water. The refrigerator stopped working and rats and roaches invested the trailer.

Still, the couple worked, doing their best to recover.

When it rains, it pours

Every day, they checked their doorless mailbox, hoping for the $1,500 FEMA check that would go towards a new trailer. They began to worry it had been stolen. School was back in session, but the children’s clothes had been ruined in the flood. There was no money for backpacks or school supplies. The family’s problems were compounding.

During the day, the children stayed inside, hidden from authorities. Diapers were getting low, and finally there were none at all, just the one the baby had on. The food was nearly gone and the family worried what they would do when it was all gone.

A knock on the door changes everything

A needs assessment team from Christian Reformed World Relief Committee’s Disaster Response had stopped by the trailer as part of a process to identify flood survivors who still needed help.

Larry Van Tongren said the team was “appalled” by the conditions. Within hours, the family had food and clothing vouchers, school supplies and diapers. Fresh water was provided — not just for them, but the other 49 families still living in the trailer park.

By the following day, arrangements had been made for them to move to a motel for six days until decent housing could be found. A case manager assigned to them began coordinating other resources. The husband needed medical attention. Both parents needed stable employment. They needed a long-term recovery plan tailor-made just for them.

A holistic approach to disaster response

It’s a new day in faith-based disaster response. The faith community, long-known for its cadres of volunteers who provide immediate clean-up and long-term rebuilding support, is now also focusing on assessing the appropriate needs of disaster survivors.

Education, work, finances — after a disaster, one or more of those is broken. We’re sensitive to the whole person. We don’t just see the house, but the family’s spiritual and emotional needs. ~ Cathy Earl, UMCOR

It is a people-centered approach, aimed at determining not only the survivor’s initial needs but the resources necessary to facilitate complete recovery. Canvassing neighborhoods and talking with residents identify problems that can be quickly addressed, as well as other issues that may require help from multiple disaster response organizations and social service agencies.

Navigating the myriad of paperwork can be daunting, and survivors easily fall through the cracks every year, either giving up on the process or not receiving the help they need.

“Education, work, finances — after a disaster, one or more of those is broken,” says Cathy Earl, of U.S. Disaster Response for UMCOR. “We’re sensitive to the whole person. We don’t just see the house, but the family’s spiritual and emotional needs.”

She says faith-based disaster response organizations have an advantage over federal programs; as they are not held to income caps and other federal requirements, they can be more creative in their approach, helping people who otherwise might not qualify for assistance.

Case managers are typically drawn from the local community, giving them knowledge an outsider may not have, but it takes training, says Bill Adams, director of U.S. Disaster Response Services for CRWRC. Volunteers undergo a basic or week-long course, depending on the time they’re able to devote and the role they wish to fill. Increasingly, that training is being done by professional consultants, who teach everything from basic paperwork to cultural sensitivity, the symptoms of Post-Traumatic Stress Disorder, and ways to conduct compassionate interviews while establishing trust.

Many survivors who start out with a low level of depression and are almost ready to give up, but once they see that people care about them, it starts to turn around. ~ Bill Adams, CRWRC

“Many survivors who start out with a low level of depression and are almost ready to give up, but once they see that people care about them, it starts to turn around,” Adams says.

Sometimes, it’s the helpers themselves who need help.

Linda Reed Brown, former associate director of Church World Services National Disaster Response, says following Hurricane Rita in Texas, one of the case managers was facing his own battle. After work each day, he returned to the damp, moldy house he was sharing with his mother, using every penny he could make to try to help her.

Finally another volunteer discovered what was happening in his life and helped move his mother to safe housing.

Since Hurricane Katrina, the needs assessment and case management process is increasingly being used, allowing faith-based disaster response organizations to tap into a nationwide database as well as smaller local databases, increasing efficiency and maximizing resources while decreasing duplication and waste.

Because of Katrina’s scale, the number of international and national volunteers, and the scattered diaspora of survivors, centralized information systems like Coordinated Assistance Network (CAN) and Katrina Aid Today allowed faith-based organizations to open dialogues about what case management means to each group.

For some organizations, a case manager may simply find housing. For others, like UMCOR, the case manager may not do everything, but he or she will coordinate, or at least be aware of, all aspects of a family or individual’s recovery plan.

How to implement case management

Case management is something that’s been quietly done for three decades, but as it moves to the forefront, a new question is arising: Should case management be standardized, creating a common set of methods, criteria, and training?

Proponents like Liz Lawrence-Bowen, Senior Officer of Interagency Strategic Initiatives for CAN, say by moving disaster response organizations to a common platform and case management tool kit, they’ll have more time to spend with survivors, easing their burdens more effectively.

But Bob Arnold, Associate Director for Capacity Building and Evaluation for Church World Service Emergency Response Program, says standardization has its shortcomings, namely that case management’s main strength — volunteers — will be diluted if local case managers are replaced by professionals.

God has called us to do this. There are people in the world who have needs, and we’ve been blessed to help them with. We don’t go in preaching, but very often people just need someone to pray with. ~ Bob Arnold, CWSERP

“Case managers work with families and individuals to develop their own personal plans and needs, trying to find assistance that doesn’t necessarily exist in an established program,” Arnold says. “It’s not just a case worker referring people or saying you have to do this or that. To have a pro come in from the outside and do that work is really problematic.”

But at the end of the day, the responders all agree on one thing: They want to go wherever they’re needed and provide whatever assistance they can to help survivors, whether that means short-term assistance or long-term recovery.

“I can’t speak for others, but for UMCOR, definitely it’s our mission and faith that motivates us to give and serve,” Earl says. “We don’t proselytize, but I still think that plays an important role. It’s not just bricks and mortar, but what happens out there.”

Arnold agrees. “God has called us to do this. There are people in the world who have needs, and we’ve been blessed to help them with. We don’t go in preaching, but very often people just need someone to pray with.”

Tonight, thousands of families across the United States are still recovering from Hurricanes Katrina, Dolly, Gustav and Ike. There are families recovering from floods, fires, tornadoes. And in virtually every state, faith-based volunteers are knocking on doors, asking questions, giving answers, and helping survivors on their journey towards tomorrow.