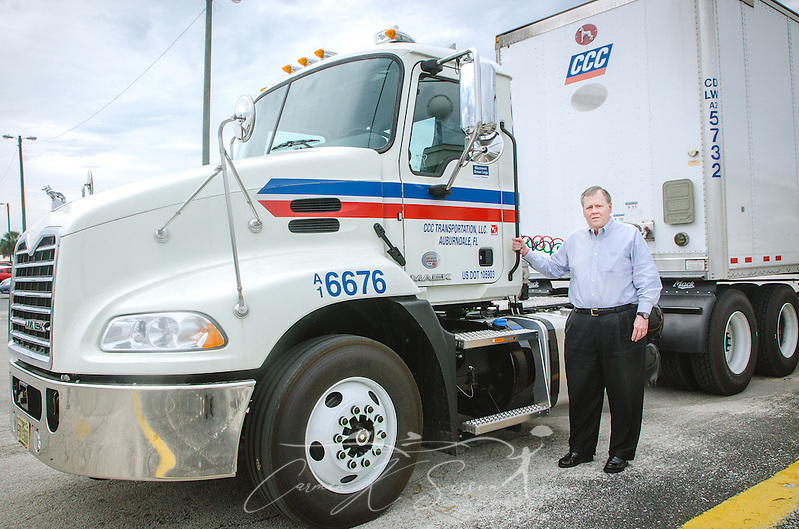 AUBURNDALE, Fla. — Comcar Industries has a rich history studded with achievements. Over the past 60 years, the family-owned business has built not only a trucking empire but also a quiet reputation for getting the job done right, with the warmth and sincerity of a Southern company rooted in tradition.

The Comcar difference is evident from the moment you enter the property, which is nestled in a downtown industrial area of Auburndale, Fla., and encompasses most of the block. The company’s white trucks, emblazoned with red and blue stripes, enter and exit almost continuously.

A painting of company founder Guy Bostick – now 94 and retired – looks down upon it all from a wall in the building’s lobby. His influence at the heart of everything Comcar has become and everything it stands for in the trucking industry is still on display.

Mark Bostick, Guy’s son, is determined to carry on his father’s legacy, with an unwavering belief in hard work, family values and a corporate culture built upon people first. 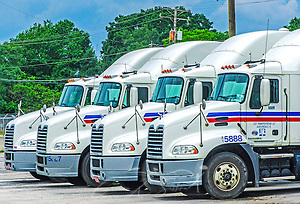 Mack Trucks are pictured outside the headquarters of Comcar Industries, April 16, 2015, in Auburndale, Fla.  (Photo by Carmen K. Sisson/Cloudybright)

Mark Bostick always knew what he wanted to be when he grew up. He learned the trucking industry at the knee of his father, who worked long hours building what would eventually become Comcar Industries. By the time Mark was 14, he was washing trucks and trailers and learning the ins and outs of the company he would someday own.

He loves to tell the story of the company’s humble beginning. In the 1940s, Guy Bostick sold the family car (much to the chagrin of his wife) to buy his first truck. In 1953, he founded Commercial Carrier Corporation, figuring that if he could eventually own 25 trucks, he would be doing well.

By the time Mark Bostick joined his father full time in 1981, the company had annual revenue of more than $30 million. Today, it’s more than $400 million, and the small family business is one of the country’s leading carriers, running four separate companies with more than 45 locations nationwide, 4,500 employees, and 3,000 trucks. 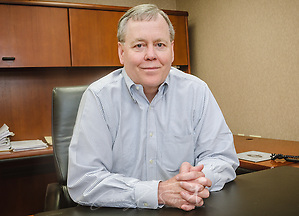 Mark Bostick, president of Comcar Industries, is pictured at the company headquarters, April 16, 2015, in Auburndale, Fla. The company was founded in 1953 by his father, Guy Bostick, and Mark Bostick is keeping his legacy alive through his people-first philosophy. (Photo by Carmen K. Sisson/Cloudybright)

“I always knew this was what I wanted to do,” Bostick says. “My father never pressured me to be involved, but I felt like it was such a great opportunity. When I went off to college, I took business and management classes geared toward eventually becoming part of the family trucking business.”

His sons, Barrett Bostick and Scott Lingenfelter, are following in the family footsteps as well, with the former working as Comcar’s president of commercial carriers, and the latter serving as vice president of purchasing.

Mack DayCabs and sleepers comprise about 80 percent of the fleet. The trucks average 2.5 years old, with most logging 100,000 to 125,000 miles per year.
“We want trucks that run and don’t break down,” he says. “We want a truck that all we have to do is preventive maintenance, ­changing oil and tires and things like that. We want the uptime.”

He shares a close relationship with his local Mack dealer Charlie Brown, executive vice president of sales and marketing at Nextran Truck Centers in Orlando, Florida. One of their earliest projects required Brown to rush deliver 100 trucks, which he did. Over the years, there have been other challenges, but Bostick and Brown have always solved them together.

“Mack is really the leader in the industry,” Bostick says. “They’ve got a good product, and it’s been reliable. But it’s not just selling the truck, it’s about being there after the sale and helping us if we have issues or problems. I feel like Charlie is part of our team.”

“Mack does this for everyone,” Brown says. “There is an extremely close relationship between Mack, the customer and the dealer.”

Having the right equipment is important, but it’s equally important to hire the right people to operate the equipment. Many of Bostick’s employees have been with the company more than 40 years, and newcomers undergo a rigorous 60-step hiring process. The company’s standards are so high that only 1-2 percent of applicants are hired.

“Our people are an integral part of what happens here,” he says. “Anyone can operate trucks and trailers; it’s the spirit and professionalism of the people that make the difference.”

Comcar, like most fleets, has to deal with the industry-wide shortage of qualified drivers. The recession forced Comcar to downsize the company by more than 1,000 employees, a hard time for everyone involved. But even as the nation recovers, the driver shortage remains a huge challenge for Comcar. Regulations, an aging population of drivers and the lack of interest in trucking by young people creates a perfect storm of labor shortages.

However, Comcar has stayed competitive in both driver pay and benefits. Even more important, their drivers gain a sense of workplace family and an ingrained corporate culture that began with Guy Bostick and is carried on today through his son and grandsons. 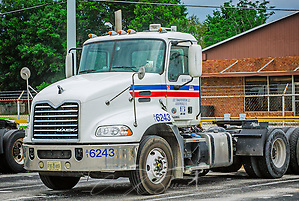 A Mack truck is parked outside the headquarters at Comcar Industries, April 16, 2015, in Auburndale, Fla.  (Carmen K. Sisson/Cloudybright)

“We try to treat people like we would want to be treated: with dignity, courtesy and respect,” Mark Bostick says. “It was important to my dad, and it’s important to me. We try very hard to make sure that philosophy permeates the company.”

Though his father is 94 and no longer works in the office, his desk has remained just as he left it. The corporate culture he established remains as well.

“My father taught me to treat people right, work hard, do the right thing and be honest and ethical,” Bostick says. “Your word is your bond. We believe in buying good equipment and maintaining it, and we value our people and want to do things the right way.”

Bostick says he hopes to continue moving forward on the same steady trajectory that has carried Comcar through good times and bad.

When potential new hires walk through his doors, he always looks for people with good attitudes who want to be part of a team.

“I tell people, ‘Life is too short not to enjoy what you do,'” Bostick says. “I want people to look forward to coming to work and being here.”

As for Bostick, there is nowhere else he would rather be.