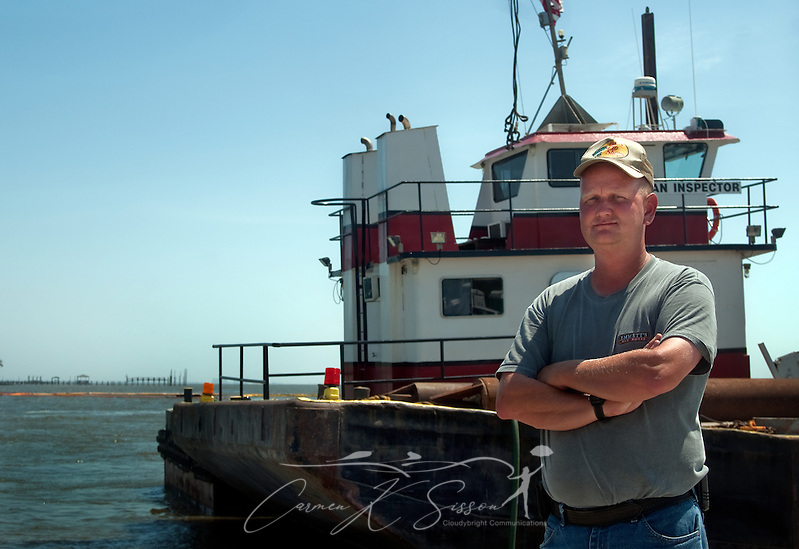 Magnolia Springs Volunteer Fire Department Chief Jamie Hinton stands in front of a spud barge June 11, 2010 in Magnolia Springs, Ala. Hinton is leading the town in a fight to protect the area from encroaching oil by blocking the entrance to Weeks Bay with barges and layers of containment boom following the Deepwater Horizon oil rig explosion and BP oil spill. (Photo by Carmen K. Sisson/Cloudybright)

MAGNOLIA SPRINGS, Ala. — Admittedly, the Gulf Coast hamlet of Magnolia Springs, Ala., is an easy place to overlook. Here, the mail is still delivered by boat, and the closest thing to a seafood industry is standing in line for blackfish at Jesse’s, the only restaurant in town.

President Obama did not put it on his itinerary this week, and when BP workers showed up in mid-May, they laid a single strand of boom across the mouth of the bay and left. The boom floated away hours later.

Magnolia Springs isn’t exactly a linchpin of the Alabama economy.

Yet if the Gulf oil spill arrives here this week as scientists have forecast, it will not find the town unprepared. A flotilla of nine spud barges – flanked by containment boom – will be waiting, ready to block the 530-foot-wide entrance to Weeks Bay. 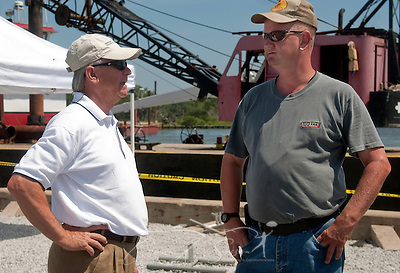 Magnolia Springs Mayor Charles Houser and Volunteer Fire Department Chief Jamie Hinton stand in front of a spud barge June 11, 2010 in Magnolia Springs, Ala. Houser and Hinton are leading the town in a fight to protect the area from encroaching oil by blocking the entrance to Weeks Bay with barges and layers of containment boom following the Deepwater Horizon oil rig explosion and BP oil spill. (Photo by Carmen K. Sisson/Cloudbright)

If all goes according to plan, these rusted steel behemoths will form an impenetrable barrier, defending the estuary’s 19 federally-protected species and the vital marshland which serves as a nursery for shrimp and other seafood so crucial to the Gulf Coast region.

They will also preserve an unspoiled way of life.

The oil spill blockade is being led by Jamie Hinton, the local volunteer fire chief who, at one point, was faced with the possibility of being jailed for violating the federal and state chain of command.

His resourcefulness is a parable not only of how desperate Gulf Coast communities have become to save the shorelines on which their lives have taken root, but also of the confusion that can consume and undermine such a massive relief effort.

In the end, Magnolia Springs did not need BP or Mr. Obama or the governor in Montgomery. It needed the grit and determination of the people themselves – people like Hinton, who says he will stand chest-deep in the waters of the bay, linked arm in arm with his neighbors, if that’s what it takes to stop the encroaching oil spill from despoiling the sublime latticework of bogs and bayous that he calls home.

Soft-spoken and polite, Mr. Hinton doesn’t fit the image of a rabble-rouser, but still waters run deep. He is passionate about this wildly beautiful place.

The plan he has been charged with implementing was the product of exhaustive community input. It is an attempt to defeat those forces of nature that have often defeated the Coast Guard and BP elsewhere. Boom is effective when placed properly, but even in relatively calm waters, some oil will always go over and beneath it. In Weeks Bay, where there is a constant one- to two-foot chop, booming is an extra challenge.

I don’t care if it’s sweet, sour, light, or black. I don’t want it in my river. ~ Magnolia Springs Fire Chief Jamie Hinton

That’s where Hinton’s barges come in. Hinton hopes they will break any wave action, allowing the boom laid in front of and behind them to contain the oil spill.

It’s not a fail-safe plan, Hinton acknowledges. He would know. He has more than 400 hours of hazardous materials training, including oil spill containment booming instruction. “Can’t say [the oil spill] is going to make it through and can’t say it won’t,” he says.

But at least it’s a plan. Nobody else seemed inclined to do much of anything for Magnolia Springs, he says. When he first began gathering resources, county officials told him he was blowing things out of proportion, that it was just sweet crude.

Others told him the government would handle it. He scoffed. He remembered the Exxon Valdez, Hurricane Katrina, Hurricane Ivan. If anyone was going to save Magnolia Springs from the oil spill, it wouldn’t be the feds, BP, or environmental activists. It would be the thousand-odd people who live here. After all, the locals knew the water – knew every twist and turn of Magnolia River, Fish River, and Weeks Bay. They would handle things the way they always did – together. 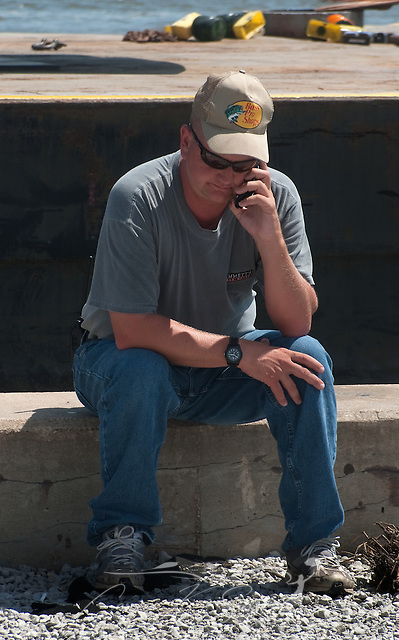 Magnolia Springs Volunteer Fire Department Chief Jamie Hinton fields phone calls as he sits in front of a spud barge June 11, 2010 in Magnolia Springs, Ala. Hinton is leading the town in a fight to protect the area from encroaching oil by blocking the entrance to Weeks Bay with barges and layers of containment boom following the Deepwater Horizon oil rig explosion and BP oil spill. (Photo by Carmen K. Sisson/Cloudbright)

While the community struggled to get its plan approved by Deepwater Horizon Unified Command, BP workers arrived with their own plan: They laid a straight line of boom across the bay, tied it to pylons with rope, and left. Hinton tried to tell them the pylons were encrusted with barnacles, but no one listened. He knew the tossing waters would cause the sharp shells to sever the rope, and he was right. The boom floated away, and Magnolia Springs was left defenseless once more.

Instead of being discouraged, he redoubled his efforts, and by mid-May, the town’s plans had been approved, along with a $200,000 grant to keep the barges manned 24/7 – a Coast Guard requirement – for three weeks. All that remained was the decision about when to put the plan into action.

Last Wednesday, that moment came. Hinton called the Alabama Department of Environmental Management and told them the time had come to deploy the
barges.

“They acted as if they’d never heard about it,” he says. “We started jumping through hoops to get the plan approved again.”

Hinton and Mayor Charles Houser conferred. If the small-town fire chief blocked the bay without permission, he could be jailed or fined, but he was willing to take that chance.

In a way, the decision was an easy one. There is a timelessness to the marshes of Magnolia Springs, where ospreys glide across the water and cottonmouths slither through pitcher plant bogs. It is “the most beautiful place on earth,” Hinton says, and he wants his grandchildren to see it – just as it is now.

I’ve been in meetings with BP and they seem like they live in a vacuum. They just don’t get it. How can you replace this? It’s our little slice of heaven. ~ Magnolia Springs Mayor Charles Houser

Friday afternoon, Hinton learned his plans to block the oil spill had been approved once more, backed by another grant that should allow them to keep the barges in place for as long as three months if necessary.

The uncertainty leads to sleepless nights for both Hinton and Mayor Houser, who says he’s confident about their course of action but still feels a queasy tension. He’s frustrated by BP’s overall plan for the Gulf Coast, calling it confusing and disjointed, with no clear chain of command.

“I’ve been in meetings with BP and they seem like they live in a vacuum,” he said Friday as he stared out at the water. “They just don’t get it. How can you replace this? It’s our little slice of heaven.”