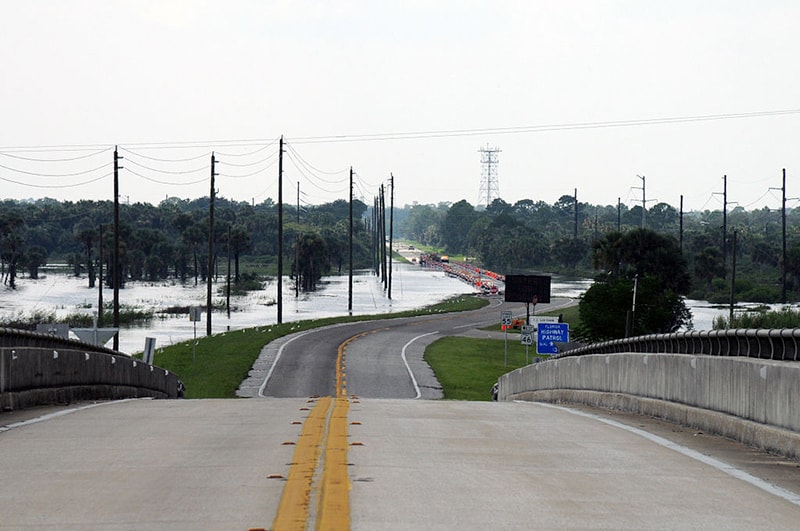 State Road 46 is underwater and shut down in the area of Lake Harney on the St. John’s River thanks to Tropical Storm Fay, Aug. 28, 2008, in Geneva, Fla. (Photo by George Armstrong/FEMA)

MICCO, Fla. — Lorraine Finch stares nervously at the blue tarpaulin covering her 85-year-old mother’s roof. It’s not raining today in southeastern Florida, but as winter sets in, nighttime temperatures are dropping into the low 20s, and the worn plastic does little to shield the home from the elements. It took less than a week in August for Tropical Storm Fay to take 36 lives and leave $180 million damage throughout the state, but recovery is moving far more slowly, frustrating both residents and the organizations trying to help.

The ceiling is leaking and ready to come down; the floors are warped and rotted; the carpeting is gone; the house has shifted off its foundation and isn’t even level; it’s a mess. ~ Lorraine Finch

Approximately 19,000 people in 27 counties have applied for aid from the Federal Emergency Management Agency and other federal programs, but many — like Finch — say the help they’ve gotten is taking far too long and is barely adequate to begin even the basics of recovery.

“The ceiling is leaking and ready to come down; the floors are warped and rotted; the carpeting is gone; the house has shifted off its foundation and isn’t even level; it’s a mess,” Finch says. “I’m on total disability, and my mother’s on Social Security. We just don’t have the money to fix this place.”

She says her mother, Helen Nauf, received $3,000 from FEMA towards the estimated $38,000 in damage, but additional help was denied because the manufactured home was deemed to have suffered the additional losses due to Hurricanes Charley, Frances, Ivan, and Jeanne in 2004.

Nauf’s health problems exacerbate the need. She uses a breathing apparatus twice a day, but it’s not enough to ward off the mold spores. Respiratory issues have kept her in waiting rooms and hospitals over the past three months, and her daughter fears the consequences of continuing to live in the damaged home.

Disaster response organizations are frustrated by the slow progress as well. In the beginning, the problem was widespread flooding. Fay dumped as much as 27 inches of rain in some areas, and little could be done but watch and wait as the waters gradually receded. In some places, water still stands.

“Fay sat on top on top of us for five days straight,” says Keith Heinly, director of case management for Brevard Long Term Recovery Coalition in Brevard County, which took heavy impact. “We got rain after rain after rain.”

He says immediate response involved merely trying to deal with the massive amounts of water. The Salvation Army distributed 10,000 cleanup kits, while other groups gave out flood buckets and covered roofs in an effort to protect what remained, but it will be several more weeks before every roof has been adequately covered. If repair is delayed too long, the work that has been accomplished will have to be redone as tarps begin to disintegrate.

There just isn’t a lot of money for Fay. Some of these areas don’t typically flood. It was unanticipated. ~ Marilyn Swanson, director of Disaster Recovery for the Florida Conference of The United Methodist Church

“UMCOR has worked with us extensively, doing a wonderful job as usual, and has been a lead partner,” Ms. Lee says. “They had a team here last Thursday and Friday tarping, removing dry wall, and scrubbing mold off walls.”

Still, the coalition reports 778 active cases, with only 367 closed. Limited funding is snarling the process. Because Fay was considered “only a tropical storm,” it was overshadowed by Hurricanes Ike and Gustav, dividing resources.

“There just isn’t a lot of money for Fay,” says Marilyn Swanson, director of Disaster Recovery for the Florida Conference of The United Methodist Church. “Some of these areas don’t typically flood. It was unanticipated.”

FEMA has distributed $26 million to residents, and an additional $3 million to local governments, but officials say that’s only a fraction of what will be needed statewide, and there’s no estimate as to how long it will take for distribution of further funding.

Meanwhile, Brevard Long Term Recovery Coalition is writing proposals, hoping to receive a $100,000 grant to cover administrative costs. Until then, little can be done to move from case management to recovery. Lee says, at that point, faith-based organizations will become critical.

“A major component of our funding is the faith-based groups, and donated materials make the dollars stretch even further,” she says. “I was very impressed with FEMA and the state response, but that doesn’t change the fact that these people don’t have the money to fix their roofs. It’s their only place to live, and somebody needs to help them. Every time we have a storm, you’re going to see more and more damage. “We, as a society, are going to have to come up with some answers for these people.”

Disaster response organizations like Church World Service, which is trying to raise money for a building to house disaster preparedness services and function as a community shelter in future disasters, stand ready to help with those answers once Florida is ready to begin the next step in recovery. Heinly says they’ve gotten “a real positive response” from Lutheran Disaster Response, United Church of Christ, Mennonite Disaster Services, and others. As the coalition waits for funding, organizers remain in constant contact with faith-based partners and others, holding daily teleconferences and regular meetings. Still, Florida is a long way from even beginning to recover from Fay’s wrath.

“There’s no way to change that,” Heinly says. “We have to wait until we get what we need in order to make it happen.”

Finch says she hopes it won’t be much longer before she begins to see progress being made. “If we get another freak storm, I don’t know that this house is going to stand.”