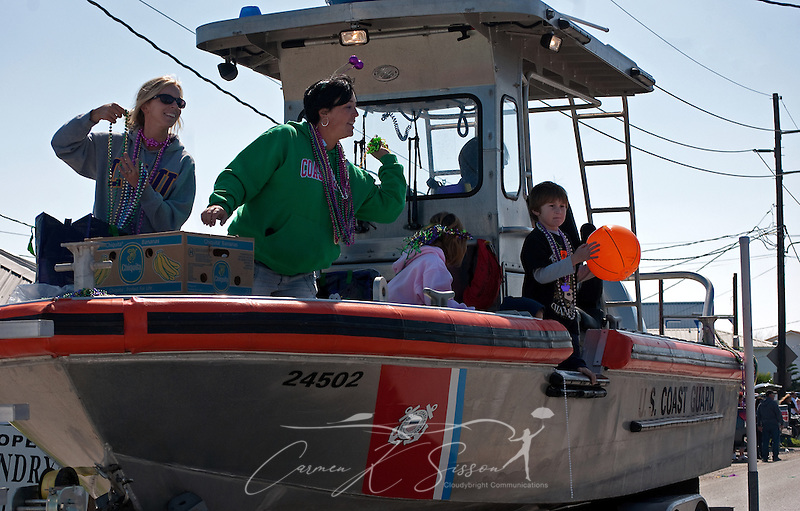 Revelers throw strings of beads to the crowd during the annual Mardi Gras parade March 6, 2011 in Grand Isle, La. The island was heavily impacted by the Deepwater Horizon oil spill April 20, 2010 and continues to recover. (Photo by Carmen K. Sisson/Cloudybright) Photo gallery of BP oil spill on Grand Isle.

GRAND ISLE, La. — Tangled ropes of purple, gold and green beads sailed through the air, landing with a thwack on Louisiana Highway 1 on Sunday afternoon. Perched on the back of a gray Chrysler Sebring convertible, Miss Grand Isle, Harleigh Duplantis, 17, fought the island breeze for control of her sash, hair and silver tiara before covering her face with both hands and succumbing to giggles. Everyone smiled. If ever a town needed Mardi Gras, it is Grand Isle — the first populated piece of U.S. territory to see oil make land following the April 20, 2010, explosion of the Deepwater Horizon. 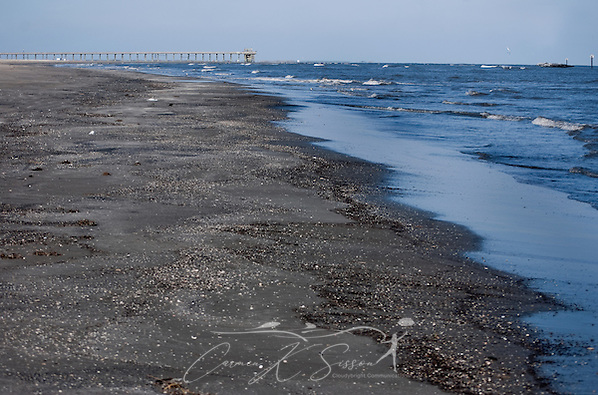 Waves crash on the beach at Grand Isle State Park on March 6, 2011 in Grand Isle, La. The island was heavily impacted by the Deepwater Horizon oil spill April 20, 2010 and continues to recover. The beach has been closed since the oil spill but re-opened in February. (Photo by Carmen K. Sisson/Cloudybright)

In the days and months following, life changed for residents of this seaside paradise. The beach closed. The seafood industry was decimated. The wildlife was stacked like piles of crude-soaked driftwood, the carcass counts rising daily. No one knew what the future would bring, and today — as the one-year anniversary of the oil spill approaches — it’s still too soon to tell. On the surface, things look better. Mayor David Camardelle estimates that Grand Isle is 80% back to normal. Only 350 of 6,500 BP workers remain cleaning up the beach, which reopened last month. People are fishing again.

Still, he admits, tar balls keep washing ashore. He likens the oil-spill remnants to a ghost in the Gulf of Mexico. It’s there; then it’s gone. When the weather is rough, as it was last weekend, the sticky globules resurface. At Grand Isle State Park on Sunday, seashells commingled with quarter-size tar balls, hard to spot from a distance but unmistakable when smeared between fingertips or toes.

Battle on the beach

Everyone tried to focus on the Mardi Gras parade and leave the oil spill behind for the day. As crowds lined up to grab fistfuls of fleur-de-lis clappers and other baubles, First Baptist Church Pastor John Boss kept one eye on the hot dogs he was grilling and the other on his flock. He grew up there, graduated from Grand Isle School in 1993, ministered there after Hurricane Katrina and held a revival last August after the spill. Four weeks ago, he decided to leave a pastorship in Alabama and go home for good. “I feel a calling to this culture and these people,” he says. “We’ve battled hurricanes. We’ll battle this.”

We’ve battled hurricanes. We’ll battle this. The battle now is in the mind and how [the community] processes the emotional response. I don’t know that the battle is still on the beach. Pastor John Boss, First Baptist Church

He paused when asked if Grand Isle is still fighting oil. “The battle now is in the mind and how [the community] processes the emotional response,” he says slowly. “I don’t know that the battle is still on the beach.”

People go to him to talk about arguments with spouses, money worries, work spats. Just like they wouldn’t talk directly about Hurricane Katrina’s devastation, they skirt the topic of the oil spill. It is the nature of Grand Isle. It is the nature of those who have been hit too many times from too many directions by too many things. He does his best to help them cope with the fallout. He knows that, like the Gulf itself, subsurface unknowns pose the greatest threat. He tries to mitigate the emotional damage. “The consequences affect us all,” he says. “I don’t think anybody escapes.”

Randy Adams, 48, never wanted to get away. He’s lived on Grand Isle for more than 20 years and had been planning to build a house there. Every week, he took the earnings from his construction company and bought something new. First the land, then the pylons.

Then the oil spill happened. In the past year, he’s roofed one house. He filed a claim with BP for lost wages, but the process is slow, and he had to feed his family. In order to survive, he sold everything he owned, including the lot that was to become his dream home. He used to go out and write scriptures on the beach in the sand. Now he won’t even take his grandchildren there. 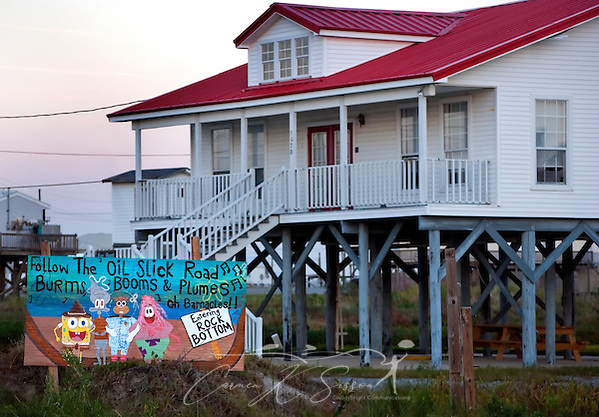 On Sunday, he watched the Mardi Gras parade from the dark recesses of Cisco’s, a local bar. As he nursed a beer and a cigarette, he talked about the employees he lost when business dried up. In past years, they would have been on the red stools beside him, but they took cleanup jobs with BP and left him in a lurch. He lost not just workers but also friends. “Times change; people change,” he says. “You got to go with the flow.”

For some, going with the flow meant enjoying the Mardi Gras festivities and trying to forget. Ray Arabie, 61, has seen a decrease in work as well, but on Sunday he was king for the day — Mr. Senior Citizen Grand Isle. He works as a deckhand on a commercial fishing boat, and normally this time of year he’d be immersed in oystering. The boat went out a few weeks ago but returned empty; the oysters were dead. This week, Arabie received a final settlement offer from BP for $5,000.

He grinned and adjusted his plastic Mardi Gras crown. It was a little big and kept slipping down to cover his eyes, but with enough padding and a little determination, it fit just fine.