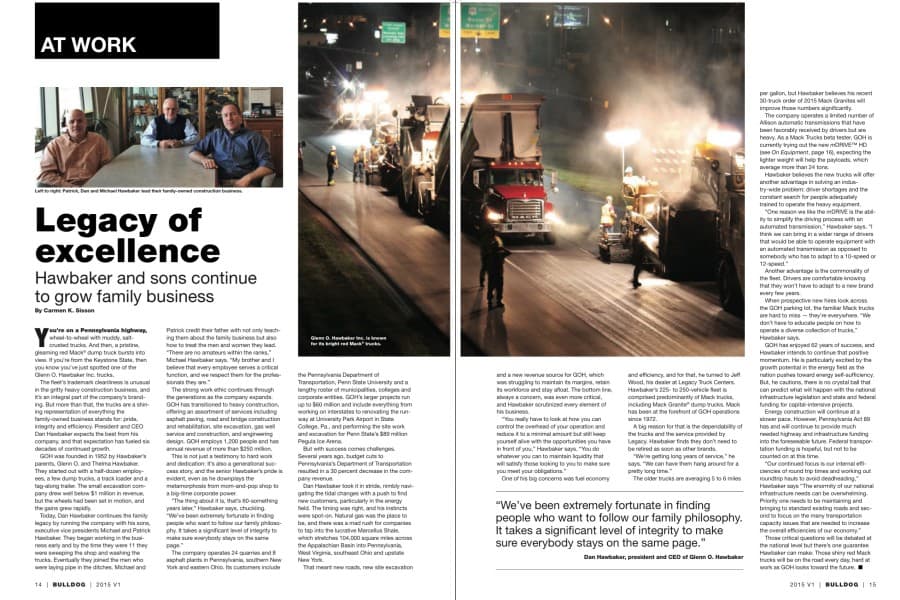 STATE COLLEGE, Pa. — You’re on a Pennsylvania highway, wheel-to-wheel with muddy, salt-crusted trucks. And then, a pristine, gleaming red Mack® dump truck bursts into view. If you’re from the Keystone State, then you know you’ve just spotted one of the Glenn O. Hawbaker Inc. trucks.

The fleet’s trademark cleanliness is unusual in the gritty heavy construction business, and it’s an integral part of the company’s branding. But more than that, the trucks are a shining representation of everything the family-owned business stands for: pride, integrity and efficiency. President and CEO Dan Hawbaker expects the best from his company, and that expectation has fueled six decades of continued growth.

There are no amateurs within the ranks. My brother and I believe that every employee serves a critical function, and we respect them for the professionals they are. ~ Michael Hawbaker, executive vice president

GOH was founded in 1952 by Hawbaker’s parents, Glenn O. and Thelma Hawbaker. They started out with a half-dozen employees, a few dump trucks, a track loader and a tag-along trailer. The small excavation company drew well below $1 million in revenue, but the wheels had been set in motion, and the gains grew rapidly.

Today, Dan Hawbaker continues the family legacy by running the company with his sons, executive vice presidents Michael and Patrick Hawbaker. They began working in the business early and by the time they were 11 they were sweeping the shop and washing the trucks. Eventually they joined the men who were laying pipe in the ditches. Michael and Patrick credit their father with not only teaching them about the family business but also how to treat the men and women they lead.

“There are no amateurs within the ranks,” Michael Hawbaker says. “My brother and I believe that every employee serves a critical function, and we respect them for the professionals they are.”

The strong work ethic continues through the generations as the company expands. GOH has transitioned to heavy construction, offering an assortment of services including asphalt paving, road and bridge construction and rehabilitation, site excavation, gas well service and construction, and engineering design. GOH employs 1,200 people and has annual revenue of more than $250 million.

We’ve been extremely fortunate in finding people who want to follow our family philosophy. It takes a significant level of integrity to make sure everybody stays on the same page. ~ Dan Hawbaker, president and CEO

This is not just a testimony to hard work and dedication: It’s also a generational success story, and the senior Hawbaker’s pride is evident, even as he downplays the ­metamorphosis from mom-and-pop shop to a big-time corporate power.

“The thing about it is, that’s 60-something years later,” Hawbaker says, chuckling. “We’ve been extremely fortunate in finding people who want to follow our family philosophy. It takes a significant level of integrity to make sure everybody stays on the same page.”

The company operates 24 quarries and 8 asphalt plants in Pennsylvania, southern New York and eastern Ohio. Its customers include the Pennsylvania Department of Transportation, Penn State University and a lengthy roster of municipalities, colleges and corporate entities. GOH’s larger projects run up to $60 million and include everything from working on interstates to renovating the runway at University Park Airport in State College, Pa., and performing the site work and excavation for Penn State’s $89 million Pegula Ice Arena.

But with success comes challenges. Several years ago, budget cuts to Pennsylvania’s Department of Transportation resulted in a 30 percent decrease in the company revenue.

You really have to look at how you can control the overhead of your operation and reduce it to a minimal amount but still keep yourself alive with the opportunities you have in front of you. You do whatever you can to maintain liquidity that will satisfy those looking to you to make sure you meet your obligations. ~ Dan Hawbaker, president and CEO

Dan Hawbaker took it in stride, nimbly navigating the tidal changes with a push to find new customers, particularly in the energy field. The timing was right, and his instincts were spot-on. Natural gas was the place to be, and there was a mad rush for companies to tap into the lucrative Wikipedia: Marcellus Shale, which stretches 104,000 square miles across the Appalachian Basin into Pennsylvania, West Virginia, southeast Ohio and upstate New York.

That meant new roads, new site excavation and a new revenue source for GOH, which was struggling to maintain its margins, retain its workforce and stay afloat. The bottom line, always a concern, was even more critical, and Hawbaker scrutinized every element of his business.

“You really have to look at how you can control the overhead of your operation and reduce it to a minimal amount but still keep yourself alive with the opportunities you have in front of you,” Hawbaker says. “You do whatever you can to maintain liquidity that will satisfy those looking to you to make sure you meet your obligations.”

One of his big concerns was fuel economy and efficiency, and for that, he turned to Jeff Wood, his dealer at Legacy Truck Centers. Hawbaker’s 225- to 250-vehicle fleet is ­comprised predominantly of Mack trucks, including Mack Granite® dump trucks. Mack has been at the forefront of GOH operations since 1972.

A big reason for that is the dependability of the trucks and the service provided by Legacy. Hawbaker finds they don’t need to be retired as soon as other brands.

“We’re getting long years of service,” he says. “We can have them hang around for a pretty long time.”

The older trucks are averaging 5 to 6 miles per gallon, but Hawbaker believes his recent 30-truck order of 2015 Mack Granites will improve those numbers significantly.

The company operates a limited number of Allison automatic transmissions that have been favorably received by drivers but are heavy. GOH also field tested the new mDRIVE™ HD expecting the lighter weight will help the payloads, which average more than 24 tons.

Hawbaker believes the new trucks will offer another advantage in solving an industry-wide problem: driver shortages and the constant search for people adequately trained to operate the heavy equipment.

Another advantage is the commonality of the fleet. Drivers are comfortable knowing that they won’t have to adapt to a new brand every few years.

Our continued focus is our internal efficiencies of round trip times and working out roundtrip hauls to avoid deadheading. The enormity of our national infrastructure needs can be overwhelming. ~ Dan Hawbaker, president and CEO

When prospective new hires look across the GOH parking lot, the familiar Mack trucks are hard to miss — they’re everywhere.

“We don’t have to educate people on how to operate a diverse collection of trucks,” Hawbaker says.

GOH has enjoyed 62 years of success, and Hawbaker intends to continue that positive momentum. He is particularly excited by the growth potential in the energy field as the nation pushes toward energy self-sufficiency.

But, he cautions, there is no crystal ball that can predict what will happen with the national infrastructure legislation and state and federal funding for capital-intensive ­projects.

Energy construction will continue at a slower pace. However, Pennsylvania Act 89 has and will continue to provide much needed highway and infrastructure funding into the foreseeable future. Federal transportation funding is hopeful, but not to be counted on at this time.

“Our continued focus is our internal efficiencies of round trip times and working out roundtrip hauls to avoid deadheading,” Hawbaker says. “The enormity of our national infrastructure needs can be overwhelming. Priority one needs to be maintaining and bringing to standard existing roads and second to focus on the many transportation capacity issues that are needed to increase the overall efficiencies of our economy.”

Those critical questions will be debated at the national level but there’s one guarantee Hawbaker can make: Those shiny red Mack trucks will be on the road every day, hard at work as GOH looks toward the future.