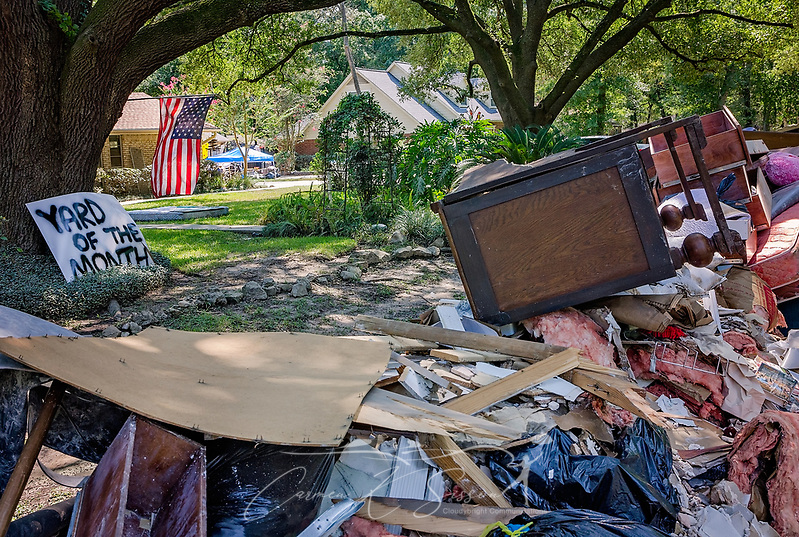 A “Yard of the Month” sign, nearly obscured by flood debris, leans against a tree, Sept. 6, 2017, in Houston, Texas. Houston received nearly 52 inches of rain following Hurricane Harvey, resulting in heavy flooding. This was the third time for this home to be flooded, and the homeowner said she does not plan to stay this time. (Photo by Carmen K. Sisson/Cloudybright)

COLLEGE STATION, Texas — Every disaster is different; every city wears its pain like an ill-fitted coat — unwanted, unchosen, hiding nothing, protecting no one. And so it is in Houston tonight, where thousands toss in restless sleep, remembering the coldness of the wind-driven rain, the tenaciousness of the sucking mud, the swiftness of the rising waters. And then there are the loved ones. Mothers, fathers, siblings, children. Thirty-one dead. Maybe more.

Most people here have not seen their homes since they fled them. At Memorial Presbyterian Church, where nearly 100 people are sheltering, the television is permanently fixed on The Weather Channel, not for the news it tells but for all it does not tell.

Betty Martin, 68, doesn’t need to see the news to know that she did not win the drawing of this miserable lottery card. Ms. Martin was one of many caught unaware when Houston’s Memorial Drive became a river and her condominium at The Pines became part of the nearby Buffalo Bayou.

A few weeks ago, she checked into purchasing homeowner’s insurance, not because she was concerned about hurricanes but because she considered selling the unit that has been her home since 1999. The insurance agent presented her with a list of repairs she would have to make, and she set the list aside to think about later. She didn’t ask about flood insurance, and the agent didn’t mention it. Because The Pines is not in the 500-year flood plain, it wasn’t a requirement. No one can remember the area ever flooding, not even during hurricanes Camille, Ike, and Katrina.

Now it doesn’t matter, Martin says. Flood insurance would not have covered the things she loved the most. Somewhere in the murky Buffalo Bayou, recipe pages float, family memories faithfully recorded for posterity by Martin’s father. There is the 1930s bed, the first piece of furniture her parents purchased after they got married. When Martin left, the water was almost to her waist. Since then, more rain fell, and the U.S. Army Corps of Engineers approved a controlled release at nearby Addicks Reservoir, saving some homes but, some say, exacerbating the problems elsewhere.

There are the stories, of course. The volunteers who came. The heroes who saved lives. But there is something else here — a gentleness, a soft touch, a quiet voice, an unspoken acknowledgment of the fragility that proud Texans will not say but cannot avoid.

As Houston disappeared beneath the water, New Orleans tried to cope with the 12th anniversary of Hurricane Katrina. Some who fled New Orleans now find themselves flooded again, with nowhere to go.

After Katrina, blue tarpaulins fluttered in the breeze, trying to protect what little was left. In some places, the cheap tarp was the most expensive thing on the property. In Houston, salvation came in the form of white sheets, white t-shirts, white bandanas, white garbage bags — anything that could be tied to a car antenna, a windowsill, a rooftop, a branch. A sign of life. A sign of resignation. A sign of surrender.

And so they came in waves, the volunteers with airboats and jon boats and pirogues. Their eyes scanned the endless water, searching for the sodden white flags. They saved people and dogs and horses and cows.

One of those groups came along and saved Martin, ignoring her protests that she and her Chiweenie, Sparky, were fine and did not need saving. But the rescuers had coffee and dog food and a canoe. In the end, it was an easy choice.

When this is over, when the waters have receded and the losses have been tallied, Martin thinks she will volunteer, too. But for now she waits, along with everyone else who has no idea when they will go home or if home will still be there when they arrive. Outside, in the darkness, the water laps against doors and walls, keeping its secrets — for now — to itself.