Houston volunteers put “some legs” on their faith 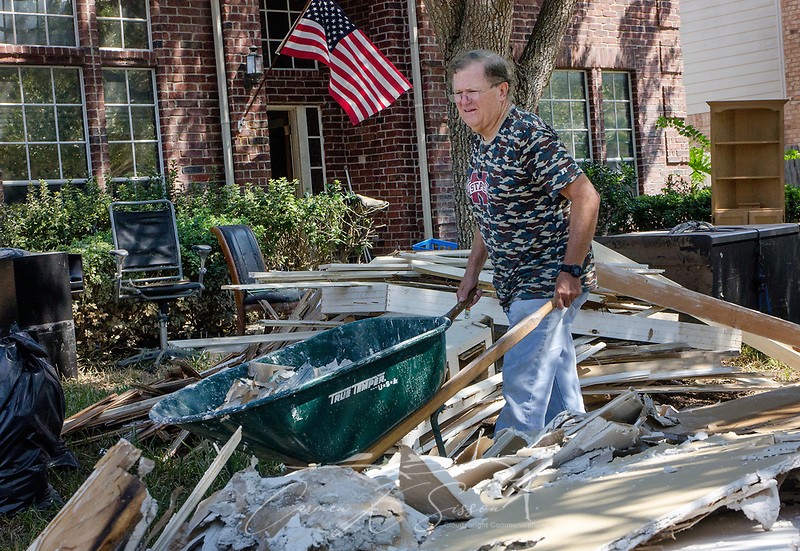 Richard Dick, of Kingsland Baptist Church, removes sheetrock from a flood-damaged home, Sept. 12, 2017, in Katy, Texas. Homeowner Mike Glover’s home was flooded when Hurricane Harvey dumped more than 51 inches of rainfall in mid-August. Approximately 70 people died in the U.S. due to the hurricane and flooding. (Photo by Carmen K. Sisson/Cloudybright)

KATY, Texas —Hurricane Harvey’s impact will be felt in this flood-weary state for many months to come as homeowners struggle to put their lives back together. Southern Baptist Disaster Relief (SBDR) crews remain on the scene, even as others deploy to Florida for Hurricane Irma response.

Shady, tree-lined neighborhoods are a maze of mismatched dinette sets and children’s toys. Stores are de facto shelters, diners and one-stop shops for donations and disaster assistance forms. Hotel rooms are at such a premium that displaced residents memorize front desk numbers and scour the Internet, hoping to catch an elusive, available room.

Times are hard, but one thing has emerged — a wave of community spirit and Christian servanthood as neighbors help neighbors and churches unleash armies of volunteers to lend hearts and hands to the cause.

“A lot of the homes have already been cleaned out,” said Monte Vincent, coastal plains area coordinator for Texas Baptist Men and a member of Kingsland Baptist Church in Katy, Texas. “The people of Texas are very resilient. They took the initiative to do a lot of these things on their own. These guys are making it happen.”

Kingsland Baptist Church, among others, partnered with SBDR after Hurricane Harvey, expanding both organizations’ work force and reach. Every hand is needed because the need is staggering.

Officials estimate more than 450,000 people need assistance from the Federal Emergency Management Agency, and more than 30,000 people were displaced when the tropical system dumped more than 51 inches of rain on the Lone Star state.

Vincent saw the flood damage after Tropical Storm Allison in 2001, Hurricane Ike in 2008, the Memorial Day flood in 2015 and the “Tax Day” flood in 2016. If you combine them, he said, you might get a better picture of the mess Texas now faces. His own home flooded three times, so he understands.

“Be patient,” he advised homeowners Tuesday as he slowly navigated around debris in a Katy neighborhood. “Put your faith in God. Take it step by step, and be willing to accept help.”

Homeowner Mike Glover was already pulling out drywall and flooring at his two-story home in Katy, but he was unsure how to handle the staircase and gas fireplace. He was relieved when SBDR volunteers arrived.

“They’ve been good,” he said, marveling at the steady stream of volunteers entering and exiting his house. “They’ve obviously done this many times. They all seem genuinely uplifted by helping.”

It wasn’t always easy to accept help, he said. Before he became a Christian, Glover led a rough life, mired in negativity and sin. When he finally came to Christ, he realized that his life was in God’s hands.

That clarity helped him the night flood waters entered his house. He and his wife, Kim, intended to ride out the storm with their son, Brendon, and their two dogs. By the time rescuers arrived, the water in his foyer had reached his knees, and it was still rising.

“I said, ‘This is in God’s control, let’s roll with it,’” Glover recalled. “I’ve received so much, and it’s time for me to give back.”

“How do you not get involved?” he asked as he pulled sheetrock from Glover’s living room wall. “I don’t think people understand the full scope of what’s going on. Every U.S. citizen needs to come in and do this at least once.”

Some even took time away from their jobs to volunteer. Larry Fischer, also a member of Kingsland Baptist, traded his Delta Airlines uniform for a tool belt and a hammer. He tried to recruit others to help, but many declined. The hardest part is not so much doing the work as it is fighting inertia long enough to begin. Last week, he was busy cleaning the muddy water out of his home. Now, he’s dedicating his time to others.

“It’s the most rewarding thing I’ve ever done,” Fischer said. “You just have to get up and do it. Once you do it, you don’t want to stop. Helping someone — boy, that’s a good feeling.”

Walking through Glover’s house is jarring. Family portraits are clustered above the water line — memories of better days. A sign above the kitchen door states, “In God we trust.” Upstairs, salvaged items jostle for space. Outside, volunteers search in vain for blank spaces to fill with never-ending loads of debris. The grass, once neatly manicured, is almost hidden by waterlogged doors, wooden molding, insulation, sheetrock and furniture.

Flood waters came within 30 feet of Kingsland Baptist Church member Marvin Wade’s house, but some of his neighbors were less fortunate.

“You feel a little guilty,” he said. “You look at people like this, and you think, ‘Why? Why not me?’ You feel helpless. But there’s a plan and a reason. We talk about being Christians, well, put some legs on that, and get out and help.”

There remains an urgent need for volunteers, and that need will increase as current volunteers slowly return to their jobs. Week days, in particular, are times of need. For information about volunteering or making a financial donation to the North American Mission Board’s Send Relief efforts, visit sendrelief.net. Many state Baptist conventions are also participating in relief efforts and accepting donations.