Huntsville eyes next launchpad for growth 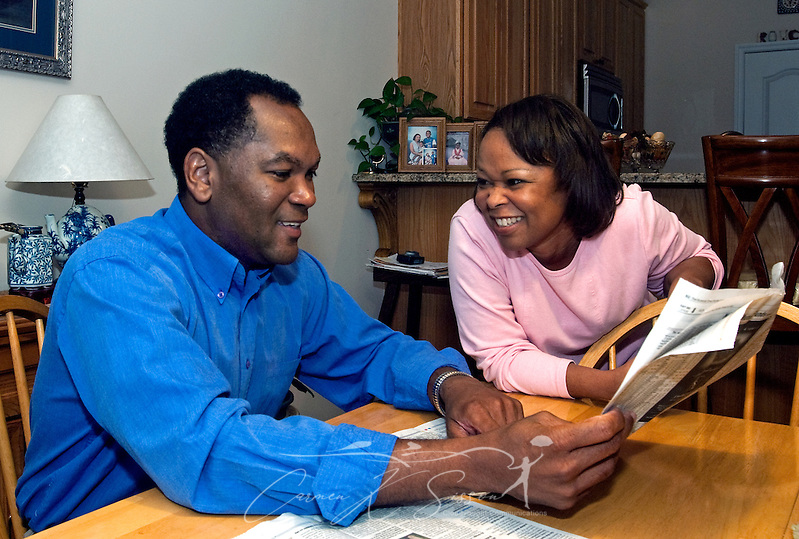 Levern Eady and his wife, Veda, talk over the real estate section in the kitchen of their home in Madison, Ala. Oct. 27, 2009. The Eadys chose to relocate to the Huntsville metropolitan area for the intellectually-rich environment it provides for their children as well as its future economic potential. Analysts expect Huntsville to fare well in the new economy thanks to its strong aerospace, defense, and biotech industries. (Photo by Carmen K. Sisson/Cloudybright)

HUNTSVILLE, Ala. – You should probably leave the rocket scientist jokes at home when visiting Huntsville, Ala. The chances are good (1 in 12, in fact) you’ll meet one here. In a state beset with educational challenges, this mid-size city (pop. 396,000) is an anomaly, a figurative brain soup where intellectual capital is a commodity and innovation is the driving force behind economic recovery and future success.

When retired US Army Lt. Col. Levern Eady began looking for a place to relocate his young family, Huntsville immediately topped his list, not surprisingly. Built on the spine of its two major employers, Redstone Arsenal and NASA’s Marshall Space Flight Center, the once-sleepy cotton town is landing on a lot of lists these days: Forbes’s best place to weather the downturn, Fortune’s No. 1 location to start a small business, Business Week’s best place to raise children, Kiplinger’s best overall city. 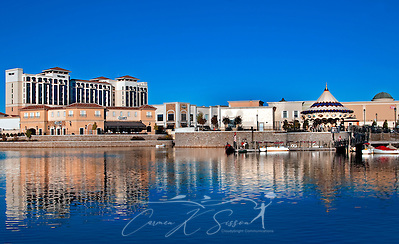 Bridge Street Town Centre is a mixed-use lifestyle center featuring more than 70 upscale shops and restaurants in Huntsville, Ala. Analysts expect Huntsville to fare well in the new economy thanks to its strong aerospace, defense, and biotech industries, but Chamber of Commerce president Brian Hilson says retail will also play an important role. (Photo by Carmen K. Sisson/Cloudybright)

Mr. Eady, who spent 20 years as a military logistician, didn’t have a job when he moved to the area. But, like 40 percent of the people here, he quickly found employment in what economists call the “creative sector,” working at LogiCore, a female-owned start-up that specializes in corporate and military problem-solving.

“The intellectual atmosphere here is very high,” says Eady, sitting in his well-appointed home, which is laden with the scent of potpourri and, at the moment, echoes of the Alabama-Tennessee football game.

That may well continue to be the key to Huntsville’s success as the state – and nation – move out of recession and shift more from a capital-intensive economy to a “creativity” economy fueled by innovation. As economic powers like India and China continue to rise, the US will have to develop its intellectual acumen if it wants to compete for the technologies of tomorrow. “There’s no such thing as stability as we used to know it,” says Barry Mason, dean of the business school at the University of Alabama. “There’s just constant destruction and creation. It leaves a lot of people behind, but creates enormous opportunity as well.”

Even with Huntsville’s heavy reliance on aerospace and defense, he says enough diversity exists – particularly in biotech and other industries – to propel the city into the next decade. Places like Cummings Research Park – with 225 companies – may well serve as Huntsville’s new economic launching pad.

There’s no such thing as stability as we used to know it. There’s just constant destruction and creation. It leaves a lot of people behind, but creates enormous opportunity as well. ~ Barry Mason, University of Alabama business school dean

More immediately, though, defense will continue to play a major role as the city prepares for an influx of up to 12,000 people in the next few years as a result of base consolidation by the Pentagon. In this case, Virginia’s loss will be Huntsville’s gain.

Martin Soler, an analyst at Moody’s Economy.com, says the effect of the base realignment will be felt throughout the area as demand increases for new schools, better roads, and more private-sector jobs. As long as living costs remain low, he envisions Huntsville growing “far above the national average” over the next decade.

Still, the federal government makes up 20 percent of the labor pool, leaving the area vulnerable to budget cuts. In addition, manufacturing continues to be a drag as consumers postpone big-ticket purchases like cars.

Location may also play a factor. Whereas Mobile, Ala., is a port city, allowing it to attract businesses like steel giant ThyssenKrupp, Huntsville is “a fairly remote area,” Mr. Soler says. Instead, the “Rocket City” will have to capitalize on its brainpower.

The city is putting $100 million into expanding the airport, $279 million into road projects, and is planning a “green initiative.” “If you look at our growth over the past five to 10 years, that’s exactly what I see on the horizon for the next 10 to 20 years,” says Brian Hilson, head of the local Chamber of Commerce.