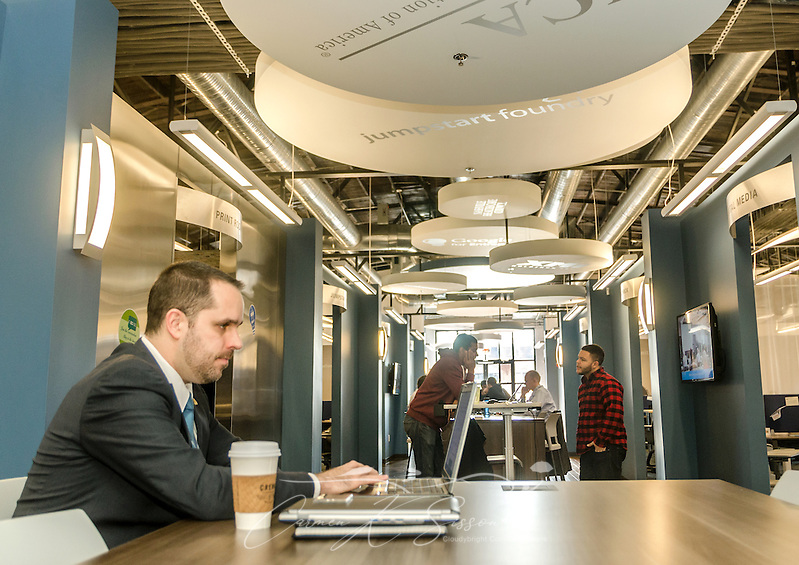 Jason Pappafotis, senior physicist at Alion Science and Technology in Washington, D.C., uses one of the shared workspaces at the Nashville Entrepreneur Center, Jan. 6, 2015, in Nashville, Tenn. The Entrepreneur Center has become the nucleus of a burgeoning startup movement — largely led by Millennials — in the city. (Photo by Carmen K. Sisson/Cloudybright)

NASHVILLE, TENN. — On a bluff overlooking the Cumberland River sits a nondescript red-brick building that once housed the city’s trolleys. A faded square above the door hints of the building’s past, while on the left-hand corner, a small white flag advertises the arrival of the future – a start-up incubator where business-minded Millennials are growing a quiet revolution.

Music City, once known for its country-tinged twang, is transforming into something of a Southern Silicon Valley, luring young people en masse. Nearly 30 percent of the city’s population is between the ages of 20 and 39, and more are arriving every day. 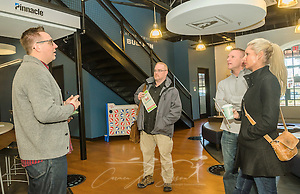 Robbie Goldsmith, age 27, knows exactly why his peers want to be here, and he sells the city – and the Nashville Entrepreneur Center – with youthful zeal. Today, the Chicago native, clad in a gray sweater and faded jeans, is conducting a tour for an audience of three. He stops in the corridor of the 20,000-square-foot facility and explains its perks.

Modern Nashville, Tenn., exudes both a trendy and traditional ethos. It has a relaxed, yet professional atmosphere that appeals to young people. The cost of living is lower here than in many cities. By day, Millennials can make their own rules and create their own business culture. At night, they can enjoy the city’s cultural and culinary offerings.

“Millennials are more interested in lifestyles they can really buy into,” says Mr. Goldsmith. “This city is so creative. Who doesn’t want to be able to leave their 9-to-5 and catch a show downtown?” 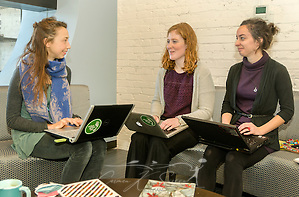 Lexi Lipham, 22, moved from Atlanta in November because she felt that the city was too big, and it was too complicated and too hard to make a difference with her ideas. Nashville offered a sense of community. A sense of pride. And, most important, people willing to help.

Nashville’s metamorphosis from country cliché to fashionable business mecca is far from accidental. In fact, the Nashville Area Chamber of Commerce works hard to not only retain young talent but also to lure the rising 22-to-40 set away from other cities, says Alex Hughes, vice president of talent attraction and retention. She works with a network of 300 colleges, showcasing Nashville’s assets and focusing “100 percent” on the Millennial demographic.

As much as 70 percent of the young professionals in Nashville are from elsewhere, Ms. Hughes estimates. Many others are locals who left but came back. Nashville native Jason Pappafotis moved away to take a position as a senior physicist at a science and technology company in Washington, D.C. But he quickly missed his hometown and is now exploring opening a branch office for the company at the Entrepreneur Center.

The older crowd at the facility offers seasoned experience and mentorship, and the younger generation brings limitless ideas. That doesn’t always happen in places like Washington, Mr. Pappafotis says. The “all business, all the time” mentality is stifling to many Millennials. They like to blend work with play and passion with knowledge, creating something uniquely their own. 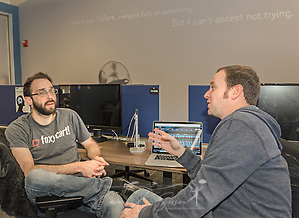 It’s not surprising that a favorite Millennial hangout boasts those attributes. Pinewood Social is a place where the lines between work and life are blurred. At some tables, patrons talk applications and seed funding while eating sandwiches. One plasma TV flashes stock market news while another plays college football highlights. A floor-to-ceiling glass wall offers a view of Pinewood Social’s most eclectic feature – a six-lane bowling alley. Outside, swimming pools beckon.

The free-flowing lifestyle is all part of what Johnathan Jones calls the new Nashville. He works as the facility and technology director at the Entrepreneur Center, and though he is a Nashville native and went to college elsewhere, he knew there was only one city that would truly feel like home. “I felt the buzz, and I knew it was only going to get bigger and better,” Mr. Jones says. “You don’t have to go to New York or Los Angeles or Silicon Valley.”