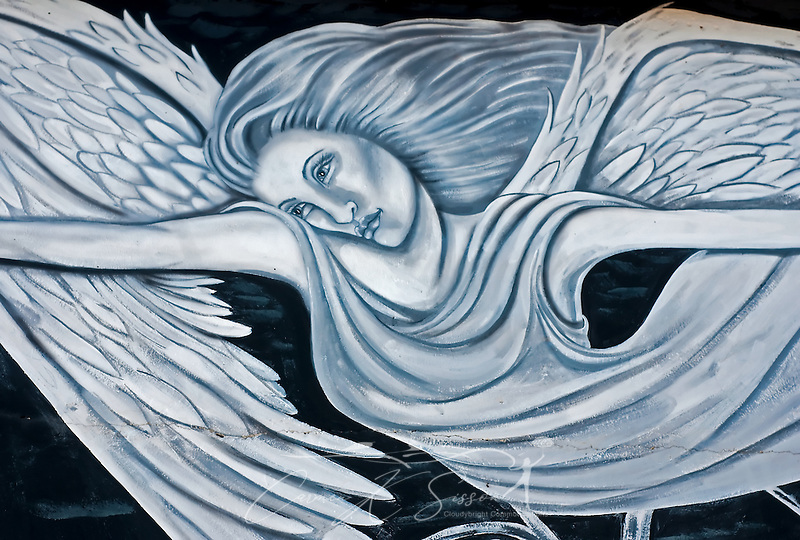 An intricate painting of angel graces a cinderblock wall May 8, 2011 at Camp Victor in Ocean Springs. Ocean Springs, known as the “City of Discovery,” features whimsical street art throughout the downtown area. Much of the artwork tells the story of the town’s history, from its founding by the French in 1699 to the devastation and recovery after Hurricane Katrina. Katrina survivors have started new lives elsewhere but say they still miss “home” sometimes. (Photo by Carmen K. Sisson/Cloudybright)

COLUMBUS, Miss. — It has become the benchmark by which all storms are measured. It has become the stark demarcation between life before and after, with Hurricane Katrina sitting squarely in the middle of coastal residents’ collective memory — as vivid today as the muddy water lines and red spray-paint which can still be seen on homes uninhabitable, abandoned.

If you’re not looking, you may not see it. But for the Katrina survivors, the storm’s mark remains, even as they navigate life in the post-K world. Some, like Shana Sullivan and Virginia Eselin, decided enough was enough. Storm-weary, with little more than the possessions they could carry, they chose to build new lives elsewhere. Columbus became home.

Today, on the seventh anniversary of Hurricane Katrina, the two women say they are stronger than ever. Like the reeds on a river bank, they have learned to bend but never break.

Theirs is a story not unlike those of thousands of others in Katrina’s diaspora. It is a story of hope borne on the tides of despair.

For Sullivan’s patients at Saum Chiropractic Clinic on Alabama Street, hers are the hands that ease pain and realign the off-kilter. It is a skill she has spent the past seven years honing.

She was just out of college when Katrina struck, had lived in Arabi, La., such a short time that most of her belongings remained stacked in boxes, awaiting a future that never materialized.

As time goes by, it gets easier, but any time hurricane season comes around, you still get that gut feeling — you never lose that … it’s hard, yes, and you constantly look back, but you remember that where it brought you made you stronger and made you the person you are today. ~ Shana Sullivan

She was no stranger to hurricanes. She grew up in Morgan City, La., went to college in Hammond, La., and had been working at a practice on Canal Street in St. Bernard Parish for only a month. When she arrived at work Friday, Aug. 26, 2005, she had no way of knowing it would be the last time she would walk through those doors.

The following day, she packed her diploma, baby pictures and summer clothes and fled 80 miles north to Amite, La., where she thought she would be safe with friends. Within two hours of her arrival, the group decided Katrina was intensifying too fast, becoming too large. They headed northward again, to a camp house in such a remote part of Mississippi that even today, Sullivan is not sure where they rode out the storm.

The drive homeward was littered with downed trees and a growing sense of worry. It was a month and a half before her neighborhood was cleared for re-entry. She wasn’t prepared for what she saw.

The levees had been breached, and more than 20,000 homes in the parish had been damaged. Most of the houses on her street were leveled. Her front door, which had been kicked in by rescue workers, was slashed with a red “X.” Search complete. No one found.

As she stepped over the threshold, she was greeted by the contents of her back bedroom and the fetid stench of mold growing up the wall and across the ceiling.

Today, Sullivan, 34, is glad she didn’t try to start over in Louisiana. She believes she would still be struggling to recover, like so many of her friends. In Columbus, she has been able to network and build her career. She has been able to heal.

The anniversary of Katrina brings her back to that day, but it also serves as a salient reminder: She survived.

“As time goes by, it gets easier, but any time hurricane season comes around, you still get that gut feeling — you never lose that,” she says. “But when you go through a situation like that, it’s hard, yes, and you constantly look back, but you remember that where it brought you made you stronger and made you the person you are today.”

Virginia Eselin, 76, emerged not only more resilient but more alive than ever.

The Columbus native and her husband, Thomas Eselin, lived in a bungalow on the lower end of Pascagoula’s Market Street, just a block beyond the seawall. The new retirees were in the midst of remodeling, and their lives were filled with friends and parties.

The night Katrina arrived, Eselin found herself huddled on a bed at her sister’s house with her dog, Charlie, watching water rise to the top of the mattress as her husband and sister huddled in a separate part of the house, transfixed by the terrible scene unfolding outside the window.

They were two miles inland. The water was never expected to reach that far.

The hurricane was a terrible thing, but it opened new doors for me. Life is always full of possibilities. Here I am, 76-years-old, and I just can’t wait to get started again. ~ Virginia Eselin

The next day, as she and her husband dodged debris and attempted to make it back to their home, they passed a man in the street and asked how their neighborhood looked. He shook his head. Bad. Real bad.

The front part of their house had collapsed. She picked her way to the entry and stared at what had once been an ornate mirror in the foyer. The glass was gone, the frame barely clinging to the wall. Because she didn’t know what else to do, she straightened the mirror’s frame, staring into a reflection-less void.

The hurricane wiped the couple out financially, taking not only their home but also the apartment complex that should have made their retirement years carefree.

Thomas Eselin, who grew up in Pascagoula and had never thought of leaving — not during the hurricane of 1947, not during Hurricanes Betsy, Camille or Frederic, not ever — turned to his wife.

“Virginia,” he said, “please don’t make me build back.”

But even though they’ve made a new life in her hometown of Columbus, he hasn’t let go of Pascagoula, she says. He’s homesick. He blocks out the memories of Katrina. Won’t talk about it.

For her, the transition has been a good one. She renewed friendships with classmates from Lee High School and Mississippi University for Women, where she earned a bachelor’s degree in art in 1958.

And she’s rediscovered her passion for painting. On the coast, she was scattered, preoccupied with friends and activities. Now, age and poor health have slowed her down a bit, given her a chance to enter what she thinks of as her “third act” as Virginia Eselin, the artist.

She audits art history and painting classes at The W, reveling in the vibrancy of the 20-somethings in her classes, who refuse to call her by her first name, no matter how often she insists.

She spends her days working on oil paintings and edgy collages which feed her need to explore life as she now sees it. She doesn’t cook as much as she used to. She doesn’t fritter away time with arts and crafts or nonstop motion.

She sees Katrina as the catalyst for growth, the breaking open of a chrysalis from which beauty has emerged.

“The hurricane was a terrible thing, but it opened new doors for me,” she says. “Life is always full of possibilities. Here I am, 76-years-old, and I just can’t wait to get started again.”