At Kentucky’s Fancy Farm, a Senate race heats up 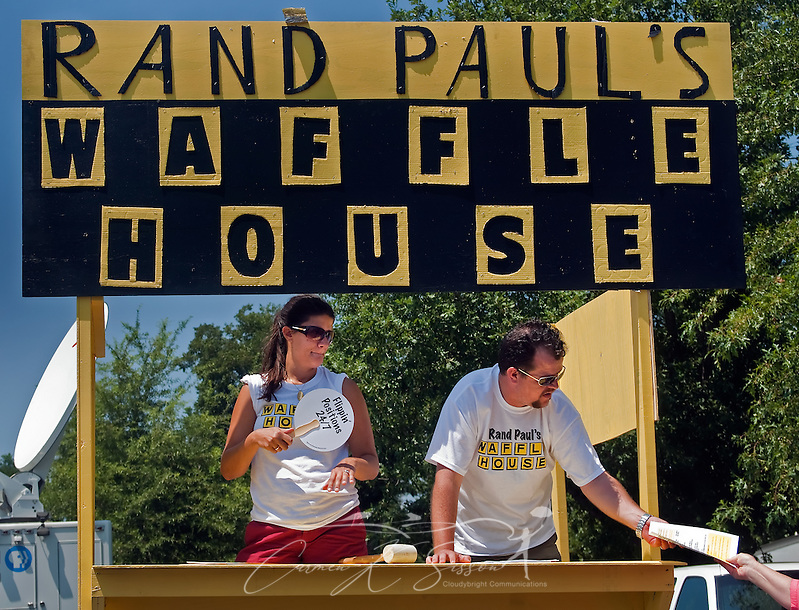 FANCY FARM, Ky. — If you want to be elected in the Bluegrass State, there’s only one place to be the first Saturday in August: Fancy Farm, Ky., where old-fashioned politics meets dyed-in-the-wool religion, and the differences are evened out by the glorious, gluttonous, gastronomic magic of charred pork and mutton at the annual Fancy Farm picnic-cum-political rally. 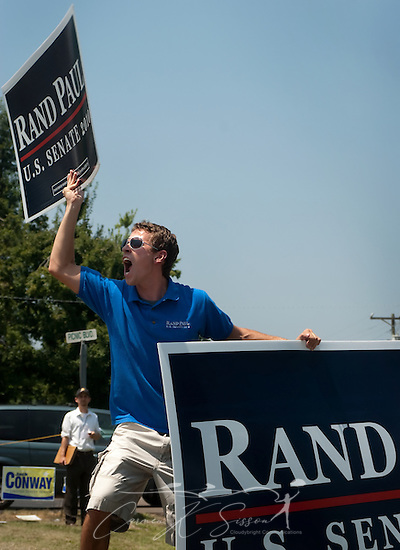 The event has grown substantially from its humble beginnings in 1880, when the predominantly Catholic community saw the St. Jerome church fundraiser mainly as a way to celebrate the end of the tobacco harvest season.

It didn’t take long for politicians to smell an opportunity, along with good barbecue. The picnic is well known as a crowdpleaser, drawing more than 15,000 people this year.

What vote-seeking politico could pass up the chance to tout his message one last time before Election Day? The food gave the picnic its reputation, but the stump speeches gave it its fame.

For politicians, attendance is far from compulsory — in fact, it’s invite-only — but local lore says if you don’t show up, you can’t win; so an offer to speak at Fancy Farm is highly coveted and seldom refused.

Who wants to buck a 130-year tradition? Certainly not Republican Senate nominee Dr. Rand Paul or his opponent, Jack Conway, the main draws for this year’s festivities.

As supporters lined the street to wield signs and chant (“We back Jack!” and “No way Conway!”), the pair faced off in a verbal sparring match that can only be compared to a cross between a down-home county fair and a Southern-style jousting tournament.

“I can tell you from past experience, you’re about to get a wild ride,” organizer Mark Wilson warned the crowd. “But let’s make our mamas proud and act in at least a fairly civil manner.”

I can tell you from past experience, you’re about to get a wild ride. But let’s make our mamas proud and act in at least a fairly civil manner. ~ Fancy Farm organizer Mark Wilson

Then the gloves came off. Conway accused Paul of being “a waffling pessimist who wants to be the prince of cable TV.” Paul attacked the tax code as well as the entire Washington political machine, citing a “broken” government which “drifts from crisis to crisis.”

Every point was accentuated by cheers and boos from the audience, for this is the fun of the Fancy Farm picnic. As long as everyone keeps it clean — no foul language allowed — they’re free to chant themselves hoarse.

Sometimes, it even makes a difference. Don Kilcoyne, 71, said he walked onto the shady grounds of St. Jerome Church, where the event has been held since 1880, intending to vote for Conway; but by the end of the day, he’d changed his mind. He didn’t like Conway’s supporters, and so his ballot will go to Paul in November. 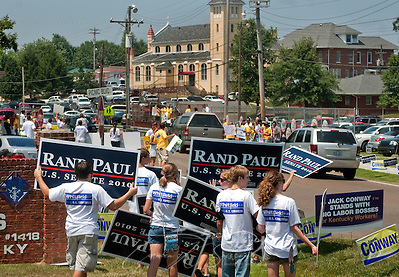 Supporters of Republican Senate candidate Rand Paul line the road Aug. 7, 2010 at the 130th annual Fancy Farm picnic and political rally in Fancy Farm, Ky. Paul, along with his opponent, Democrat Jack Conway, spoke at the picnic, which is held by St. Jerome Catholic Church, seen in the background. (Photo by Carmen K. Sisson/Cloudybright)

Most of the 900 people in this unincorporated section of western Kentucky grew up attending the picnic, and many — like Kilcoyne — worked at it as children. He can remember being paid 50 cents by his father to man the booths, then hurrying to spend his earnings on Coke, ice cream and games before returning to earn another 50 cents. It’s a special part of his youth, and one which comes back to him every August as Fancy Farm’s corn fields grow lush and politicians’ rhetoric grows long.

There was a time, he says, when a Republican would receive a merciless drubbing from the mostly-Democratic crowd, but the community is changing. Now it’s half blue, half red, and it’s anyone’s guess as to which candidate will come out on top. “It’s like a presidential debate, only ratcheted up a few notches,” said Father Darrell Venters, priest of St. Jerome. “It kicks off the Kentucky political season.”

Still, for some it’s all about the food: 19,500 pounds of pork and mutton, 5,600 pieces of chicken, 750 pounds of potato salad, 140 gallons of corn, and tables laden with cakes and pies. For $10, a person can stuff himself fuller than a Bluetick hound, and if he’s still hungry, additional booths throughout the grounds offer sandwiches, chips and drinks.

Pete Thomas, 66, spent his Saturday tending four seething cauldrons of chicken deep-frying in boiling peanut oil. It takes a staff of 3,000 volunteers nearly a year to organize the Fancy Farm picnic; Thomas, like Kilcoyne, has being doing it since he was a child. He heard Gov. George Wallace and Vice President Al Gore speak years ago when both men were running for president. He knows the story of the old oak tree under which the politicians used to speak: how lightning struck it and it died, inspiring a legend and a plaque commemorating the day “all those lies finally killed the tree.”

He rarely makes it down the hill to hear the bipartisan fracas — he’s too busy cooking — but people send along the salient tidbits of gossip. 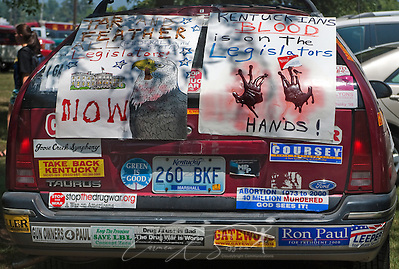 A station wagon covered in political signs is seen in a parking lot at the 130th annual Fancy Farm picnic and political rally Aug. 7, 2010 in Fancy Farm, Ky. The picnic, held by St. Jerome Church, has become well-known for its theatrical stump speeches by local and state politicians. (Photo by Carmen K. Sisson/Cloudybright)

Conway’s fans set up a mock “waffle house” and passed out menus outlining what they say is Paul’s campaign legacy: flip-flopping rhetoric. A bearded man wandered around bare-legged, carrying a club and bearing a sign on his back: NEANDERPAUL. Paul supporters carried red boxes meant to represent the unwieldy tax code. Republican senate candidate Trey Grayson, who lost the primary, went overtime in his speech and was drowned out by a bluegrass band playing “Rocky Top Tennessee.” Two men got into fisticuffs while debating the merits of the candidates and the police had to intervene.

Thomas just shakes his head and smiles. There’s nothing else in the world like Fancy Farm, and if you think this year’s picnic is something, just wait until 2012. With the presidency up for grabs, he’ll be frying chicken for days just to feed the crowd.