Home Recent Bylines Knox Elementary goes to Washington for the inauguration, Part 1 of 3

Knox Elementary goes to Washington for the inauguration, Part 1 of 3 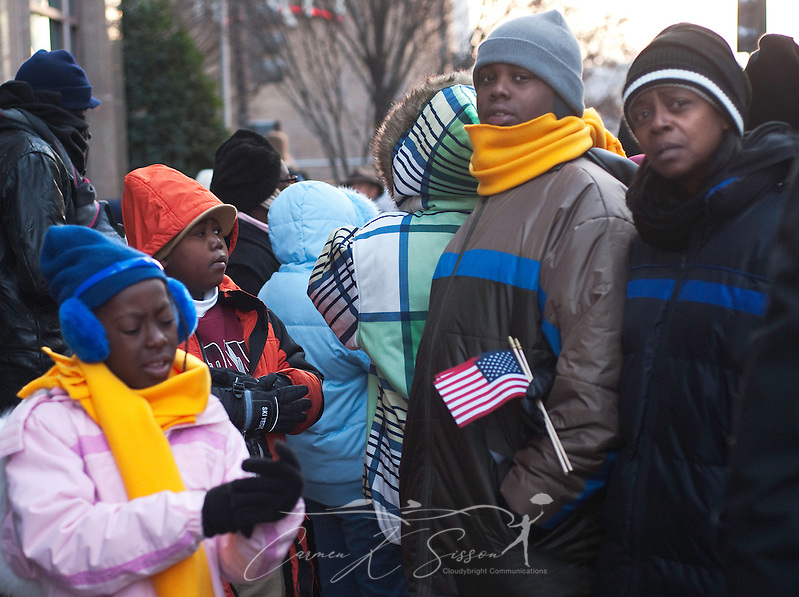 Students from Knox Elementary School in Selma, Ala. wait for instructions Jan. 20, 2009 as they head to the National Mall in Washington D.C. to see President Barack Obama’s inauguration. The students traveled from Selma to Washington for the event, after spending nearly a year saving money. (Photo by Carmen K. Sisson/Cloudybright)

SELMA, Ala. – Excited chatter falls to a hush as Knox Elementary School principal Joslyn Reddick enters the library. She peers into two large boxes, then casts a worried glance over the throng of fourth- and fifth-graders. The donated coats are small. There are gloves and hats of every color, but there’s not a matching set of anything.

Still, the Selma, Ala., community has been generous, and she’s grateful. When Barack Obama is sworn in as the 44th president next Tuesday, her students will see it firsthand, and it won’t matter if their socks match their shoes or their sleeves are too long. They will be there.

She hands Alexis Norwood, age 9, a slim package of pink thermal underwear. “They’re to go under your clothes,” Ms. Reddick says. “They’ll keep you warm when we’re in Washington.”

The girl eyes the clothing dubiously, then grins and returns to her cluster of friends, eagerly waiting to inspect the apparel. She tears the plastic carefully and slips her hand inside. Her eyes grow wide.

“I thought they were pajamas,” she whispers.

It’s a tiny detail, making sure the students are adequately clothed for the cold weather when they leave Sunday, but Reddick has left nothing to chance. Nearly a third of Selma’s 20,000 residents live below the poverty level, and long-abandoned businesses and shotgun houses border her 220-student, all-black school.

Reddick has had to repeat that mantra to herself many times over the past year. When she presented the idea to parents last spring, no one was sure whether Obama would even receive the Democratic nomination. She spent the summer formulating a rough itinerary anyway. 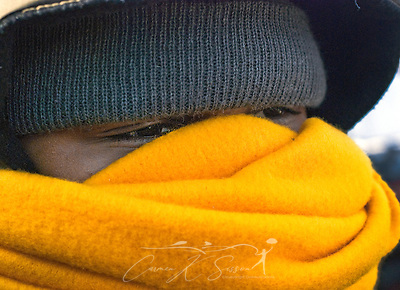 Ricky Simpson, a student at Knox Elementary School, watches President Barack Obama’s inauguration Jan. 20, 2009 on a large screen at the National Mall in Washington, D.C. Simpson and his classmates traveled by bus from Selma, Ala. for the event. (Photo by Carmen K. Sisson/Cloudybright)

She researched chartered buses and settled on a local bus line. She booked 25 rooms at a hotel in Waldorf, Md. By the time classes resumed, she’d taken on a new challenge – how to raise the $18,000 that had already been spent to see a man who had not yet been elected.

The students held a doughnut sale, but it brought in only modest funds. They barely broke even with a fall festival. Reddick had quoted a cost of $155 per student, but if the school couldn’t raise the money she’d have to charge more. Many families wouldn’t be able to afford it.

“Money was coming in, but it just wasn’t enough,” Reddick says. She e-mailed Obama and Oprah. No response.

Things got worse. Talk surfaced in the community that the trip was a bad idea. For most, it was simply a fear of the unknown. Many of the parents had never been to Washington. They didn’t know what to expect. The crowds worried them. Would their children get lost? Would they even be close enough to see Obama?

I know they’re thinking, ‘Oh my God, I’m going to another world.’ There was a child at Knox who had never been to McDonald’s. ~  Lachune Simpson, Knox Elementary parent

Few of the children had ever spent the night in a hotel or seen a city larger than Birmingham. “I know they’re thinking, ‘Oh my God, I’m going to another world,’ ” says Lachune Simpson, a local parent. “There was a child at Knox who had never been to McDonald’s.”

A few older residents were haunted by history. They lived through the assassinations of Martin Luther King Jr. and Robert Kennedy. They recalled the violence that occurred in 1965 on Selma’s Edmund Pettus Bridge – how 600 activists who attempted to march to Montgomery were met by police, beaten, and turned back on “Bloody Sunday.” They knew the tauntings of the Klan – intimately. Could something disruptive happen in Washington? A violent demonstration? A shooting?

Reddick watched in shocked dismay as parents began withdrawing their children from the trip. By Christmas, she wasn’t sure it was going to take place at all. Local factories were idling production lines. A major plant closed. People who had little money suddenly had even less. The hotel manager in Maryland called to say city fire codes required fewer students to a room than originally estimated.

This might be a life-changing experience for some of my students, to let them see a different world and break the cycle of the community they live in. There’s a lot of drugs, a lot of gangs. I was trying so hard to raise funds and get people’s support. I just thought, ‘OK, I’ve done everything I can.’ ~ Joslyn Reddick, Knox Elementary School principal

“This might be a life-changing experience for some of my students, to let them see a different world and break the cycle of the community they live in,” Reddick says. “There’s a lot of drugs, a lot of gangs. I was trying so hard to raise funds and get people’s support. I just thought, ‘OK, I’ve done everything I can.’ ”

She called a parent, and they prayed together over the phone. By the time they were finished, Reddick’s faith was restored. She redoubled her efforts, and, slowly, more donations trickled in. Since then, there have been new setbacks, but she says she isn’t worried.

Knox Elementary is going to Washington.

With less than a week before the trip, the reality is sinking in for everyone. Ms. Simpson clutches a list as she looks at insulated socks and hand warmers at a Wal-Mart. When she told a co-worker at Selma Waterworks she was going as a chaperone, the woman didn’t believe her at first.

“Both of us were in her office just crying, and right at that moment, I understood exactly what it means to people,” Simpson says.

She’s disappointed by the lack of support, but blocks out the negativity. “I think it’s so worth it,” she says. “At one time, we weren’t even allowed to vote, and [now] we have a black president.”

I think it’s so worth it. At one time, we weren’t even allowed to vote, and [now] we have a black president. ~ Lachune Simpson, parent

She glances at her daughter, Trenda, who’s trying on rhinestone belts with her friend, Brittney Sanders. The girls agree – the white belt won’t match the tasseled snow boots Trenda hasn’t stopped wearing since she got them for the trip. Clippings of Obama grace Trenda’s bedroom walls, alongside High School Musical and Jonas Brothers posters. New earmuffs and a scarf sit in a basket on her dresser.

Though the group won’t be touring the White House, as she had hoped, she’s excited anyway. She wants to go to the zoo. She wants to see the Lincoln Memorial. She devours everything she can find about Obama and the city he will call home for the next four years.

“Trenda’s always asking, ‘How many days left?’ ” her mother says. “That’s it right now.
Washington is the place.”