Lessons from BP oil spill: Tap the power of the people 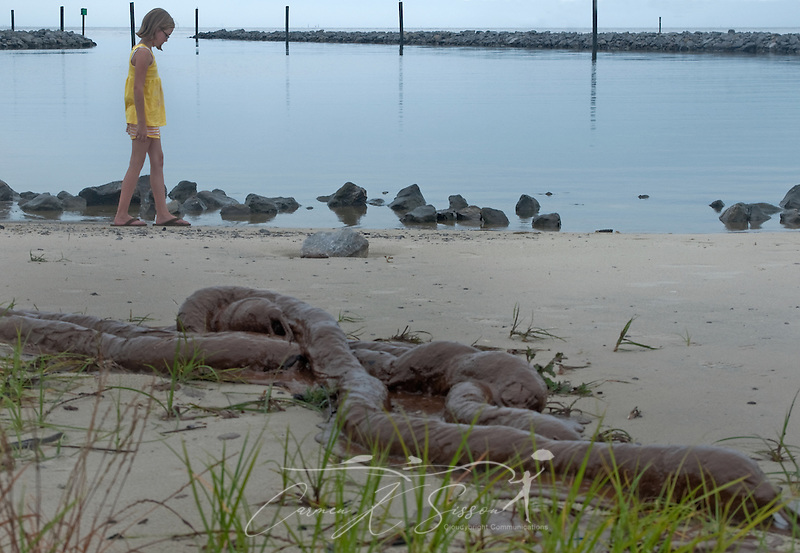 Millie Eubanks, 10, walks past an oil-soaked absorbent boom which washed ashore beside the Ken Combs Pier in Gulfport, Miss. June 30, 2010. Mississippi had been largely spared from the effects of the Deepwater Horizon oil rig explosion April 20, 2010, but winds from Hurricane Alex began pushing oil ashore earlier this week, affecting beaches from Biloxi to Pass Christian.(Photo by Carmen K. Sisson/Cloudybright)

GULFPORT, Miss. — The moment Gulfport, Miss., resident Megan Jordan feared has arrived. The viscous onslaught of crude is no longer an abstract horror belonging to Louisiana, Alabama, and Florida. The first globules of oil have slipped through the Mississippi Sound and washed ashore in nearby Ocean Springs. For Ms. Jordan and her neighbors, this isn’t just any beach – it’s the keeper of memories, the provenance of dreams. The destruction is hard to bear. 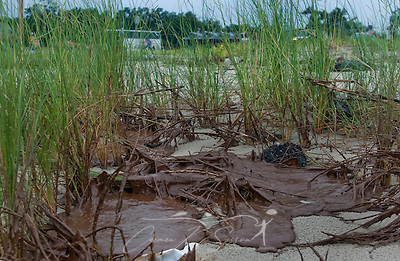 Oil from the Deepwater Horizon explosion accumulates in the grass beside the Ken Combs Pier in Gulfport, Miss. June 30, 2010. (Photo by Carmen K. Sisson/Cloudybright) 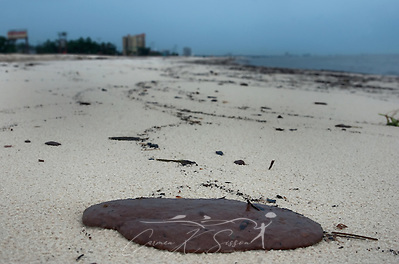 A tar patty of oil rests on the beach in Gulfport, Miss. June 30, 2010. (Photo by Carmen K. Sisson/Cloudybright) 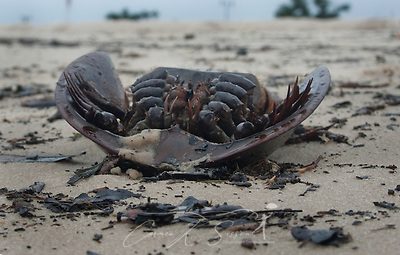 Their passion, properly channeled, could become a crucial element in future oil spill defense. Experts say that by tapping into local knowledge – and love – communities could formulate emergency plans to bolster what residents have criticized as a slow, inadequate government and corporate response.

It’s a lesson California learned in 2007, when a container ship crashed into the San Francisco-Oakland Bay Bridge, releasing 58,000 gallons of fuel into the bay. Volunteers, desperate to help, rushed to the water’s edge, creating chaos. “They had people running down to the beach, picking up oil with their hands and in T-shirts and towels,” says Kurt Hansen, project manager for oil spill research at the US Coast Guard Research and Development Center in New London, Conn.

But in a potentially toxic environment, federal laws prohibit – and often thwart – even the best of intentions. In order to participate in cleanup efforts, federal rules require at least a 40-hour hazardous waste course. Mr. Hansen says response times could be significantly lowered if communities could draw upon a ready pool of trained volunteers.

In Alaska, a network of local fishermen and others was formed after the 1989 Exxon Valdez oil spill. They participate in frequent preparedness drills, and officials say they feel far better equipped to handle an incident if one should occur again.

Along the Gulf Coast, volunteers have rushed to beaches, buckets and booms in hand, with mixed results. Some have simply added to the chaos of the cleanup effort. Others are doing some good. One local environmental group, Mobile Baykeeper, has received nearly 10,000 phone calls from people across the country wanting to volunteer.

In tiny Magnolia Springs, Ala., fire chief Jamie Hinton says he began brainstorming ideas to protect his area’s marshlands within days after the Deepwater Horizon explosion. Colleagues from neighboring cities told him to let the government handle it. “I said, ‘Are they going to handle it like they handled Katrina, Ivan, the Valdez?’ ” Mr. Hinton recalls. “Thanks, but no thanks. The only people I trust are my people.”

He has more than 400 hours of hazardous materials training, including booming instruction, but he has something else, too – a deep understanding of what he calls “my river.” The waves sometimes reach more than a two-foot chop, so he scoffed when he saw BP workers affix a boom to barnacle-laden pylons with ropes. The wave action severed the stays and the boom floated away. 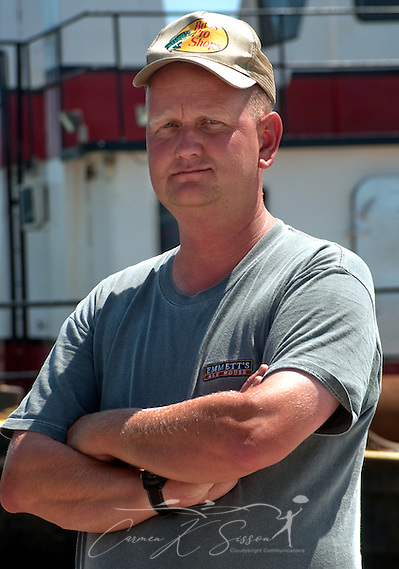 Magnolia Springs Volunteer Fire Department Chief Jamie Hinton stands in front of a spud barge June 11, 2010 in Magnolia Springs, Ala. Hinton is leading the town in a fight to protect the area from encroaching oil by blocking the entrance to Weeks Bay with barges and layers of containment boom following the explosion of the Deepwater Horizon oil rig and BP oil spill. (Photo by Carmen K. Sisson/Cloudybright)

He found a kindred spirit in Mayor Charles Houser. Together, they decided to block their bay with barges, flanking them with layers of boom. There was only one problem: They’d gotten permission, but when they got ready for deployment, they were told they had to reapply or risk being fined or jailed. They complied, but agreed that if the oil spill came near, they would act. “Sooner or later, someone’s got to do something,” says Mayor Houser.

John Wathen, a member of Waterkeeper Alliance, says there’s no shortage of people along the coast who feel the same way, but they’re being turned away by BP. He says if BP would tap into the Waterkeeper network, which spans six continents, they would find a free fount of knowledge. Instead, even these seasoned environmentalists are having trouble sorting through the bureaucratic quagmire of the Deepwater command.

“It’s been an absolute fistfight,” says Mr. Wathen. “We know our waters better than anyone. We’re not here to sue or condemn anybody. We’re out here to protect our watershed and our communities.”

He echoes Hansen’s advocacy for a trained network of volunteers. Residents could decide which area they’d like to focus on and take additional training in operating skimmers, laying boom, or rescuing and caring for injured wildlife.

“A lot of people are just yelling,” says Jen McClurg Roth, founder of Clean the Gulf Now, a grass-roots group. “But it’s about coming together and identifying the issues we can change.”