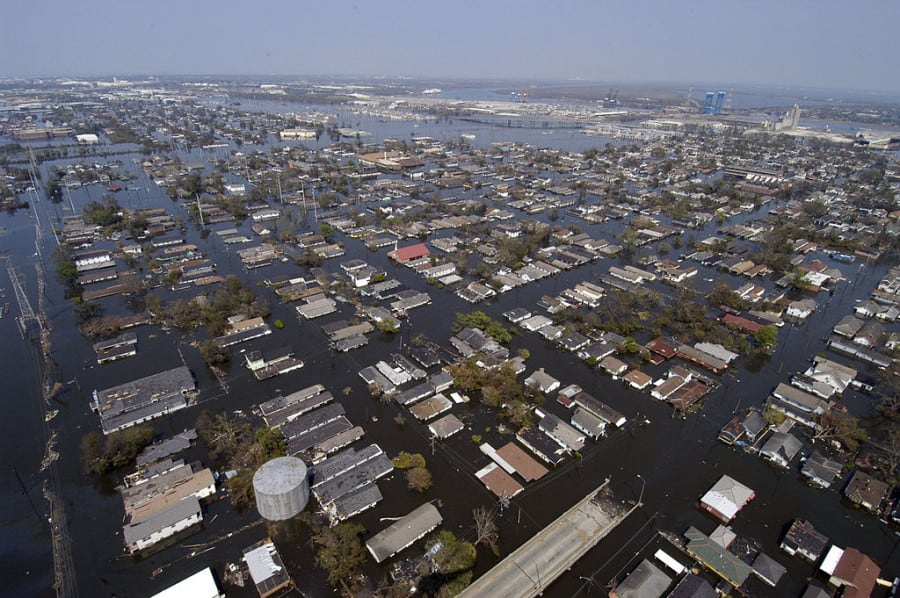 Four days after Hurricane Katrina made landfall on the Gulf Coast, many parts of New Orleans remained flooded. The Navy’s involvement in the humanitarian assistance operations was led by the Federal Emergency Management Agency (FEMA), in conjunction with the Department of Defense. (Photo by Gary Nichols/United States Navy)

But that desolation will end, sponsors believe, thanks to an ambitious investment initiative — the Isaiah Funds, managed by Jewish Funds for Justice and sponsored by six key collaborators from the interfaith community.

A few miles away, neon lights flare to life in the French Quarter as tourists wander down the streets, mesmerized by the Southern charm and joie de vivre that has enthralled visitors for nearly 300 years. One of the city’s most iconic symbols, the streetcar, rumbles along Saint Charles Avenue, making a lazy loop through the central business district, past Loyola and Tulane, past majestic antebellum mansions resplendent with sweeping verandas and intricate patterns of century-old wrought iron.

The vitality of that part of the city will spread, thanks in part to the $4.5 million in loans and grants the Isaiah Funds has allotted for affordable housing, small business development, and coastal community centers.

Beneath a nearby Interstate overpass, a man crawls inside a tattered, sloping tent which serves as his only refuge from the rapidly falling temperatures. He’s not alone. Twelve thousand others will enact the same ritual tonight, some homeless before Katrina, others without anywhere to go afterwards. That desperation will give way to hope, thanks to organizations like the Gulf Coast Housing Partnership, a New Orleans-based real estate development company which seeks to build 10,000 new homes and bridge the gap between black and white, wealthy and poor, old and young.

There are jobs, but there aren’t enough. There is housing, but there is not enough. Yet there is growing optimism as well. There is progress, albeit slow, and there is a brighter future on the horizon, albeit distant. And there are volunteers here — people of all faiths, people from all walks of life — bonded by a common determination to bring this battered city, along with the entire Gulf Coast, back to life.

It’s a daunting task. Hurricanes Katrina and Rita decimated 90,000 square miles in 2005, destroying 302,000 homes and leaving $150 billion in damage. More than 1.3 billion people were displaced, and for the ones who’ve returned, recovery is a slow, painful process made more difficult by governmental red tape and limited funds.

According to the Institute for Southern Studies, only $35 billion of the $116 billion appropriated by Washington has gone towards long-term recovery. More than half that money has yet to be disbursed. Less than half of the Federal Emergency Management Agency’s $11 billion in public assistance funds has been allocated to long-term recovery. More than 70 percent of that money remains in FEMA’s coffers. Without significant capital to back the region’s substantial needs, redevelopment remains stilted, dependent upon a slow trickle of funds some fear will be too little and arrive too late.

Jeffrey Dekro, senior vice president of Philadelphia-based Jewish Funds for Justice, immediately saw the challenge when he and representatives from 14 other faith-based groups toured southwest Louisiana in March 2006. Six months after Katrina, the American Red Cross was just beginning to make its way into some of the outlying areas. Despite what he says was “a massive, beautiful, immediate cash response,” people were falling through the gaps. There was no money being set aside for capital investment and redevelopment. There was no money being set aside for the future.

He talked with his colleagues at JFSJ. He talked with Catholics, Baptists, Mennonites, and Jesuits. They’d all been a formidable presence along the Gulf Coast, providing cash as well as hands-on aid, but everyone agreed: Religious institutions had a unique advantage over commercial entities when it came to long-term recovery investments. They had time to wait for their investments to mature, and they sought a far greater return — social change.

Together, these men and women with different beliefs but a shared goal are working to fulfill the prophecy of Isaiah 58:12: “You will restore the age-old foundations and be called repairer of the breach, restorer of the streets in which to dwell.”

The funding, which JFSJ manages and distributes via local financial institutions, is two-pronged: A Redevelopment Loan Fund to support neighborhood-based redevelopment through loans to non-profit organizations and community development financial institutions, and an Access to Capital Grants Fund, which supplements those loans to help faith-based organizations leverage investments and provides equity to stabilize the loan fund’s borrowers.

Isaiah Funds has raised $4.5 million in loans and grants so far and hopes to have $10 million invested or placed by the end of next year.

JFSJ formally launched the Isaiah Funds initiative May 15, 2008, with its first loan — $500,000 to the Gulf Coast Housing Partnership (GCHP), which works with non-profit, for-profit, and public sector organizations to generate affordable housing and rejuvenate and rebuild Katrina-ravaged communities throughout Louisiana and Mississippi. Though they have projects in Biloxi, Miss., Hammond, La., and Baton Rouge, La., their efforts are concentrated in Central City New Orleans, attempting to reestablish employment opportunities and revitalize the tax base.

If you go to the Ninth Ward, there are (few) houses. Huge swaths of the city are now vacant, blighted properties. We’re not close to finished. ~  Sara Meadows Tolleson, GCHP project manager

GCHP project manager Sara Meadows Tolleson says the swift response compared to conventional financing and grants makes the Isaiah Funds an important resource, one GCHP will use to procure land, pay redevelopment costs, and hire architects. She says those costs are much higher than anyone anticipated, but if more groups provided similar programs to the Isaiah Funds, the Gulf could recover sooner. As of today, 42,000 people still live in FEMA trailers, and one in 25 people in New Orleans is homeless.

“If you go to the Ninth Ward, there are (few) houses,” she says, “Huge swaths of the city are now vacant, blighted properties. We’re not close to finished.”

Still, Tolleson says, people are finding renewed hope through the work of a steady stream of volunteers who continue to pour in each week. She’s particularly excited about the development which sparked JFSJ’s interest and led them to make GCHP their first loan recipient: The Muses.

Where once there was an old grocery store and now there is nothing, there will eventually stand a 4.8-acre mixed-use commercial and residential development at the intersection of Felicity and Carondelet Streets, bridging two historic corridors — wealthier St. Charles Avenue and economically depressed O.C. Haley Boulevard. On one side, the commercial conveniences of drug stores, banks, and restaurants. On the other side, cultural performances, outdoor festivals, and art exhibits. In between, affordable housing featuring all the amenities, from energy-efficient appliances and free wi-fi connections to a dog park, play area, exercise room, and business center.

Their organization, too, is working with multiple faith partners, including Jericho Road Episcopal Housing Initiative, local Progressive and Missionary Baptist churches, and others.

The partners behind the projects are seldom seen, but their impact is integral to the success of the Isaiah Funds. MMA Community Development Investments plans to provide up to $500,000 by next year, with additional investments to be considered later.

Kenneth George, national coordinator for National Ministries of the American Baptist Church (ABC), says his office gave a $100,000 grant to JFSJ, and American Baptist Home Missions made a $300,000 contribution.

“It looked like a war zone. When outsiders come in, they think more progress has been made than actually has, because the outlying areas haven’t received the same level of help. The degree of damage, physical as well as psychological, really takes people who are going to be committed to the long-term process. ~ Michaele Birdsall, American Baptist Church

For treasurer and loan committee member Michaele Birdsall, ABC’s participation was particularly meaningful. She grew up in the lower Ninth Ward and still has family in New Orleans. She was among the initial group who toured the city with Dekro, but it wasn’t her first trip post-Katrina. She’d come to New Orleans two months after the hurricane for a grim task — bringing her father-in-law to see the remains of his home.

“It looked like a war zone,” she recalls. “When outsiders come in, they think more progress has been made than actually has, because the outlying areas haven’t received the same level of help.”

She says faith-based organizations like ABC have a unique role to play in terms of redevelopment beyond bricks and mortar, particularly in making sure people on the margins get the help and attention they need, not just as a quick fix, but as a permanent solution.

“The degree of damage, physical as well as psychological, really takes people who are going to be committed to the long-term process,” she says. “We try to take a holistic approach. The Isaiah Funds is just one piece.”

But in a perplexing puzzle where sometimes the pieces are right but the fit is wrong, or the crucial elements are missing completely, every group plays a vital role in shaping the future of the Gulf Coast. With the new possibilities of the Isaiah Funds partnership, many say they believe a brighter picture is falling into place.