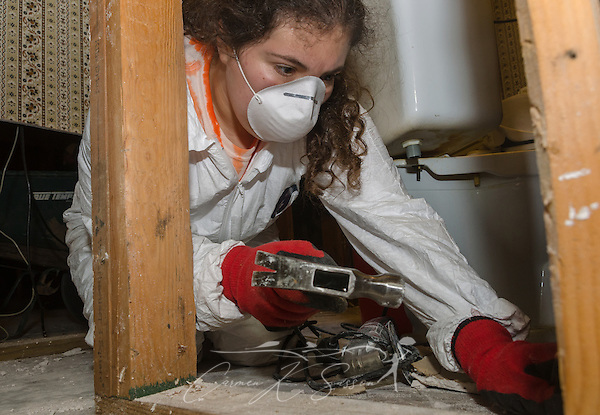 Annie Pucciarelli, a member of First Baptist Church of Brandon in Brandon, Florida, pulls nails while mudding out a home, Sept. 4, 2016, in Greenwell Springs, Louisiana. Pucciarelli was among 450 students from six states who gathered in Baton Rouge and nearby communities on Labor Day weekend to help survivors of the mid-August flood. Pucciarelli graduated from the University of Southern Florida and remains active with the college’s Baptist Collegiate Ministries. (Photo by Carmen K. Sisson/Cloudybright)

DENHAM SPRINGS, La. (BP) — John Whitehead woke to an unfamiliar sight in mid-August — water had breached his house and was rising fast. The Louisiana State University student panicked for a few minutes, facing tough decisions. What should he save and what should he leave behind?

In the end, the answer was simple. Muddy water lapped against his waist as he struggled to heave his black Labrador retriever Rascal into his kayak. Then, he paddled away from everything he and his family owned in Denham Springs near Baton Rouge, knowing they would never see most of it again.

His parents, Darrell and Zanie Whitehead, were in Tuscaloosa, Ala., trying to get home. They talked by phone several times as the situation worsened.

“I called the fourth time, and he said, ‘Quit calling me, I’m trying to save people,'” his father recounted.

By the end of the day, John Whitehead and his kayak had carried a number of people to safety, including two elderly women who were clinging to a chain link fence, with water up to their chins.

On Labor Day weekend, flood survivors like the Whiteheads in south Louisiana were on the receiving end of an even larger wave of help. LSU’s Baptist Collegiate Ministry spearheaded a massive cleanup event, drawing more than 450 students from collegiate ministries in Louisiana, Texas, Arkansas, Florida, Georgia and Tennessee. As the LSU Tigers played their first game of the season, the students pried up waterlogged wood flooring, tore out sheetrock and tried to salvage homeowners’ keepsakes from encroaching mold.

At the Whitehead home, not much is left. The few possessions they own are stored in a 5-by-8-foot shed — with room to spare. But Darrell Whitehead, a former children’s minister, is still grateful. 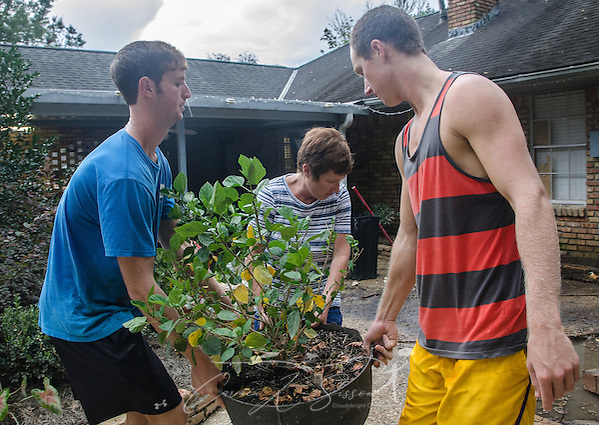 The family’s church, Istrouma Baptist in Baton Rouge, has helped, and strangers have given love offerings. But the students were a surprise. Whitehead estimates they saved him approximately $10,000-$12,000 for professional gutting, and they finished so far ahead of schedule that they were able to help neighbors with their cleanup efforts.

“When they were here, they worked,” Whitehead said. “I never heard a complaint. Those BCM kids could have done anything on those days. They didn’t have to come work, yet they did.”

It was an eye-opening weekend for some students, said Korey McCrady, director of Baptist Student Ministry at Navarro College in Corsicana, Texas. Many had never experienced a flood. Others had never used a sledgehammer or power tool.

“On the bus coming in, they were laughing and talking,” McCrady said. “But when the bus turned the corner, they went silent.”

For Arkansas State student Kristen Scarlett, a rough week on campus seemed trivial when compared with the flood survivors’ burdens.

“I thought, ‘If the Lord made me an able-bodied person, why am I not there?'” Scarlett, who attends First Baptist Church in Jonesboro, had asked. “I need to live out that calling. If you’re in good health, why wouldn’t you?”

Some students hesitate to volunteer because of the perceived time commitment, said Annie Pucciarelli, a student from First Baptist Church in Brandon, Fla. But she believes collegians are the perfect age, especially if they are not already juggling families and careers.

“I think this is the best time in my life,” she said as she pulled nails from sheetrock. “Being able to help others is a great experience. You can see that what you’re doing is making a difference.”

Students sometimes worry that they won’t have the skills to tackle the work, but LSU student Cullen McDaniel, of Jefferson Baptist Church in Baton Rouge, dismissed that excuse.

“All it takes is people coming together over one goal,” McDaniel said. “It’s not about how long you can work or the skills you have. We need hands and feet on the ground. This has taught me to trust the Lord in everything [to] provide the healing, the comfort and the guidance you need to get through the trying times of life.” 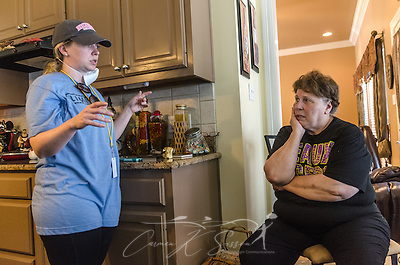 The students were a comfort to Baton Rouge resident Paulette LaComb, a member of Immaculate Conception Catholic Church. In her once-pristine home, students filled every room, with the sounds of hammers heard through the halls. If this were any other day, her house would be tidy and she would be in the kitchen, cooking jambalaya for her guests. Now the sink doesn’t work and floodwater contaminated her dishes. She applied for food stamps but her application was denied.

“I’ve been crying all week,” LaComb said. “It was such a good feeling to see all these people coming to help. I felt like nobody cared but now I know they do. You’ve got to keep believing. You can’t give up.”

The community has united more since the tragedy, said Sarah Farley, BCM associate director at LSU. The Baton Rouge area has endured a lot this summer, Farley said, referring to several fatal incidents between residents and local police. But she believes the flood has washed away some of the anger and pain.

“The way God has used the flood to unite us is amazing. A lot of people criticize young people, but I think there’s a lot of hope.”

How to help flood survivors

Those wishing to donate to SBDR relief can contact the Baptist convention in their state, or in this case the Louisiana Baptist Convention’s Disaster Relief Fund, https://louisianabaptists.org/donateDR. Donations also can be made through the North American Mission Board at donations.namb.net/dr-donations. For phone donations, call 1-866-407-NAMB (6262) or mail checks to NAMB, P.O. Box 116543, Atlanta, GA 30368-6543. Designate checks for “Disaster Relief.”

Southern Baptists have 65,000 trained volunteers — including chaplains — and 1,550 mobile units for feeding, chainsaw, mud-out, command, communication, child care, shower, laundry, water purification, repair/rebuild and power generation. SBDR is one of the three largest mobilizers of trained disaster relief volunteers in the United States, along with the American Red Cross and The Salvation Army.