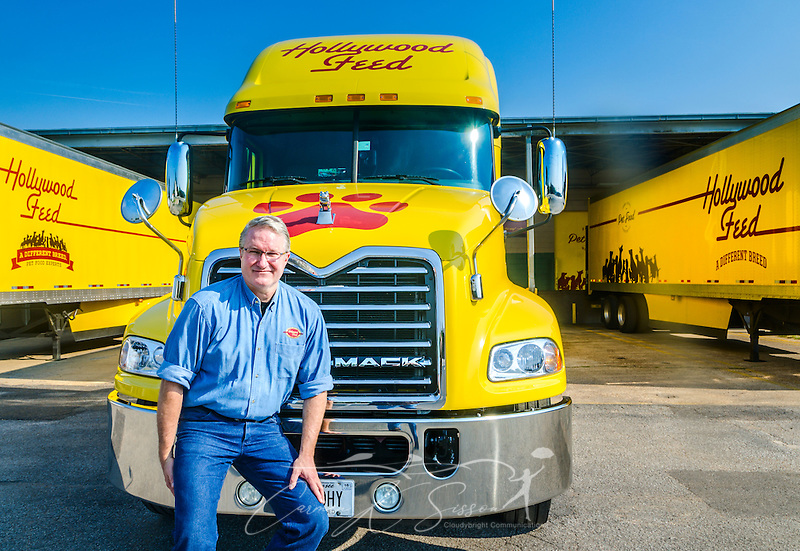 Shawn McGhee, president of Hollywood Feed, poses at the company’s headquarters, Sept. 3, 2015, in Memphis, Tenn. Hollywood Feed specializes in premium food and products for dogs and cats. The company decided to lease their own fleet of Mack Pinnacle trucks to take their distribution to the next level. (Photo by Carmen K. Sisson/Cloudybright)

Memphis business owner Shawn McGhee believes in being the best, and that culture of excellence has resulted in astronomical growth for his company, Hollywood Feed. Today, he is reshaping the pet industry and setting a new standard for his customers.

It is no coincidence that when he decided to operate his own, in-house fleet, Mack® trucks were his equipment of choice for reliability, reputation and cost efficiency. There was another benefit: The bright yellow Mack Pinnacles™ are so eye-catching that they have become an integral part of Hollywood Feed’s branding campaign.

McGhee is no stranger to success. He rose rapidly through the managerial ranks of both AutoZone and Office Depot, and when his keen eye spotted three failing feed stores, he knew he could make them profitable. In 2006, he purchased the stores and revamped them from the ground up. 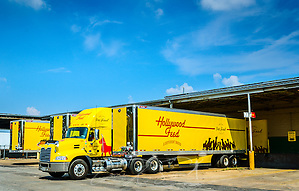 One of Hollywood Feed’s Mack Pinnacles pulls away from the loading dock at the company’s headquarters, Sept. 3, 2015, in Memphis, Tenn. Hollywood Feed specializes in premium food and products for dogs and cats. (Photo by Carmen K. Sisson/Cloudybright)

Today, Hollywood Feed focuses exclusively on premium products for dogs and cats, with more than 40 stores in five states – Tennessee, Alabama, Mississippi, Arkansas and Texas. McGhee expects to build 20 new stores in 2016. Revenue is increasing by 40-50 percent per year.

“If we can’t do something really well, we don’t do it at all,” he says.

Keeping costs down was a top priority, but when McGhee ran the numbers, he realized he could get better service at a lower price if he operated his own fleet rather than relying on a carrier. There was an added advantage, too: The stores are busy in the daytime and parking is scarce, but if he hired his own drivers, he could schedule overnight, unattended deliveries.

He started out with another OEM, but in 2013, he called Tri-State Truck Center in Memphis. The company was growing fast, and he needed equipment better suited for his operation. After exhaustive research, he decided Mack Trucks 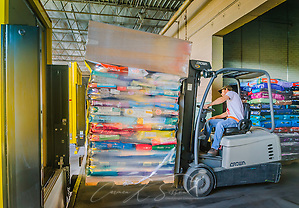 could take Hollywood Feed’s distribution to the next level.

He currently holds full-service leases on five Mack Pinnacle models and plans to rotate them out every four to five years.

“We chose Mack because of the reputation and reliability,” McGhee says. “We drove other brands, but we weren’t happy with the drivability and cab accessories. Our drivers love the Macks.”

The biggest challenge was determining the right wheelbase size and trailer size to maximize payload and maneuverability. They decided to go with an extra-short, extra-wide trailer 42 feet long with an interior of 100 inches wide. Because every minute counts toward the bottom line, McGhee had 250-300 gallon fuel tanks installed, minimizing the frequency of fuel stops.

And he had one more request: He wanted his drivers to be as happy and comfortable as possible. The cabs are equipped with microwaves, televisions, satellite radios, GPS navigation and even PlayStations.

“They’ve got a ton of bells and whistles on those trucks,” Fite says. “It’s unusual for someone to pay that much attention, but McGhee didn’t mind paying extra for lots of small options to keep his drivers happy.” 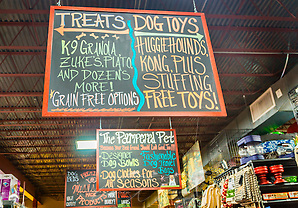 Happy drivers mean low turnover and recruiting costs and greater customer satisfaction. His drivers are proud to drive the flashy, bright yellow trucks with the canine theme. A massive red paw is emblazoned on the hood, right behind the Mack Bulldog. The trailers are built by Great Dane and feature the Great Dane logo on the rear door, along with a large dog silhouette and the word, “Woof!” The sides feature more silhouettes of dogs.

The positive brand image extends to customers who say they like the trucks so much that they take photographs when they see them on the road, tagging Hollywood Feed on social media.

“The trucks are a nice adjunct to the business,” McGhee says. “They get a lot of attention. Our trucks are the nicest on the road.”

As the company grows, McGhee anticipates adding more Macks to the fleet and 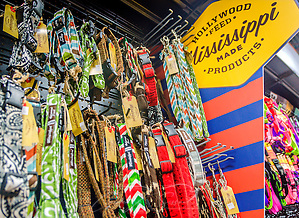 appreciates his relationship with his dealer.

“Mack handles the whole fleet maintenance equation,” he says. “We don’t even think about it. We don’t have any mechanics on staff. We entrust Mack with the service and care.”

McGhee focuses instead on how to grow his company, coming up with new ways to delight pet owners and improve the lives of their animals.

The company’s tagline is “A different breed,” and McGhee personally oversees every product they sell and is constantly seeking fun and innovative solutions for his growing clientele. They have had great success with the Mississippi Made line of dog beds, and they are now making collars and leashes from the leftover bedding material.

McGhee’s main focus is improving the lives and well-being of companion animals, and employee education is a critical component. Each of the company’s 250 employees starts out with 80 hours of training in animal nutrition and health, taught by veterinarians, researchers and nutritionists, and they receive an additional 40 hours of instruction per year.

And they are not just spouting textbook knowledge either. Each employee receives up to 500 pounds of food per month, with Hollywood Feed providing food for around 1,200 employee-owned dogs. Their pets are allowed free rein in the store, with 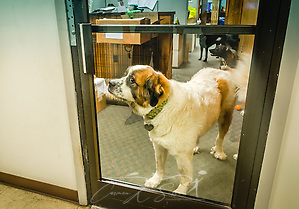 “Guss” keeps a watchful eye on the hallway at Hollywood Feed, Sept. 3, 2015, in Memphis, Tenn. Employees are encouraged to bring their dogs to work, and on an average day, there are as many as 20 dogs roaming throughout the building. (Photo by Carmen K. Sisson/Cloudybright)

sometimes as many as 20 dogs roaming the building, acting as four-footed ambassadors.

“We believe in our product,” McGhee says. “We buy it, we feed it, we support it. We have a passion for pets.”

That passion extends to the community, with Hollywood Feed donating a significant amount of time and money to charitable causes, from animal adoptions to providing free doghouses and straw for dogs left outside in the cold Tennessee winters.

Outsiders might expect such largesse to be costly — and it is — but through hard work and business savvy, Hollywood Feed should continue to grow for decades to come.

“God blessed me with the ability to absorb and understand where opportunities may lie,” McGhee says. “We think about the business at a level I don’t think many companies do. We focus always on quality. We want to be the best.” 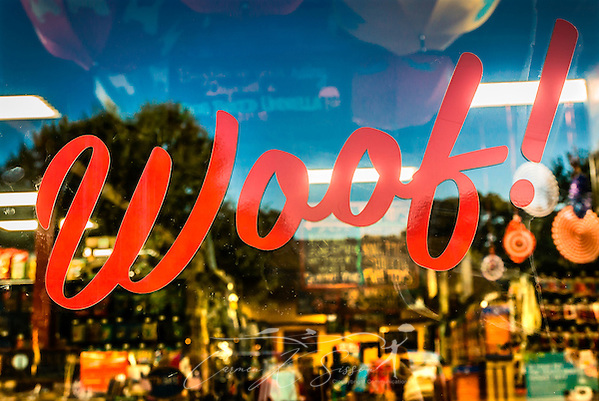 The word, “Woof!” is painted on the door at Hollywood Feed, Sept. 15, 2015, in Memphis, Tenn. Hollywood Feed specializes in premium food and products for dogs and cats. The company decided to lease their own fleet of Mack Pinnacle trucks to take their distribution to the next level. (Photo by Carmen K. Sisson/Cloudybright)