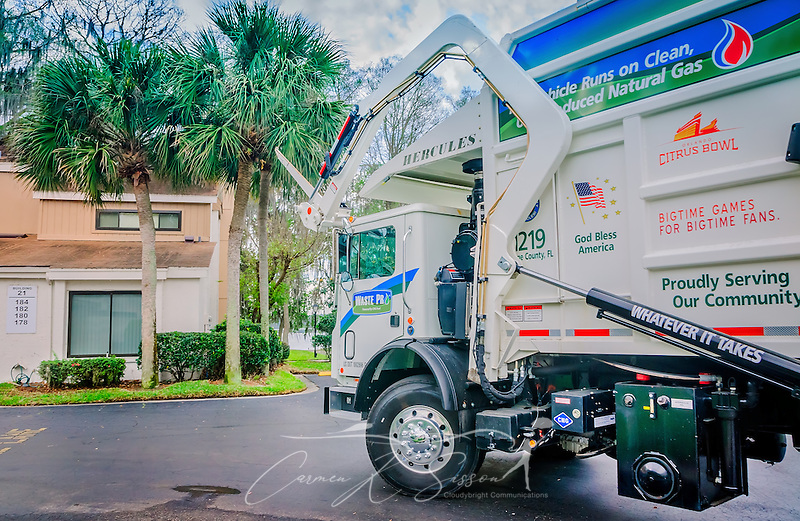 For Jennings, the Mack brand is — and has always been — synonymous with quality. As a child, growing up in New York, he spent long summers working alongside his father, collecting trash from the back of a Mack truck. When he began assembling his own fleet, he knew exactly what he wanted. 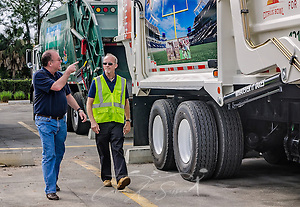 “My father told me, ‘When you see a Mack, you know that’s a truck,’” Jennings says. “If something was built like a Mack truck, it was the best it could be. It meant something was ­perfect.”

The current Waste Pro fleet is comprised of more than 2,400 trucks — 2,000 of which are Mack TerraPro®Cabovers and Granite® models.

The Macks provide significant cost savings, Jennings says, mainly because of the trucks’ longevity, dependability and low fuel consumption, especially as he transitions the fleet from diesel to compressed natural gas (CNG).

Fleet maintenance is performed in-house, and the average truck is 6.9 years old. Some are older, like the 2004 Mack CV713 roll-off, which has accumulated more than 31,000 hours of service over 875,000 miles — a lot for a refuse truck. It shows no signs of stopping either. The maintenance team expects it to run smoothly for at least five or six more years.

The Macks have another benefit, too — they are solid recruitment tools, allowing Waste Pro to attract and retain drivers. In fact, their turnover is extremely low and hovers around two percent, even as many companies struggle to find enough drivers.

“We believe the most important people are our drivers, and these drivers seem to prefer to drive Mack trucks,” says Ron Pecora, Waste Pro’s chief marketing officer.

One of those fans is Waste Pro commercial supervisor Tyrone Green, who has more than two decades of experience behind the wheel of a Mack.

The newer trucks are roomier, increasing driver comfort, and their improved visibility makes the job safer, too.

“We just don’t have problems with the Macks,” Green says.

For a man who carries two cell phones and fields calls from drivers all day long, trouble-free trucks are a welcome asset. 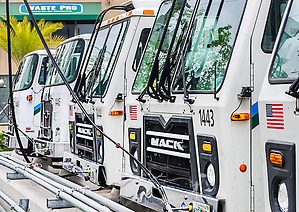 He has been impressed so far with Mack’s CNG-powered trucks.

The CNG trucks have additional benefits as well. Because they are powered by clean, natural gas, they don’t have to carry additional emission control equipment. Customers like the way the trucks are quieter, and municipalities like the way the Waste Pro trucks help them provide an essential service while supporting their own city and county-wide green initiatives.

Mack has been a forerunner in sustainability, says Charlie Brown, executive vice-president of sales and marketing at Nextran Truck Center in Orlando, Fla. 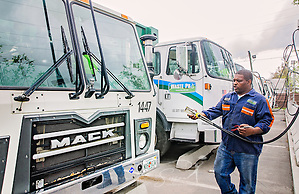 “When John Jennings made the commitment to become greener, Mack — the leader in the industry — already had a product engineered for the refuse industry,” Brown says. “A lot of the big garbage guys have gone green. Lots of contracts and municipalities want it.”

Jennings has noticed that as well and believes that a company-wide shift to recycling and sustainability has helped Waste Pro build its formidable municipal client base, which allows them to attain double-digit growth every year, even in tumultuous economic times. The new contracts offset the transitional costs of new parts, new maintenance procedures and staff training.

“CNG demand makes up 30 percent of our proposals,” Jennings says, citing his company’s newest customer, the Hartsfield-Jackson Atlanta International Airport. “We absolutely feel we win waste removal bids because of our known ­commitment to the environment, even when we are not the lowest bid.”

Waste Pro’s environmentally friendly efforts extend beyond the fleet, too. The regional headquarters is powered by solar energy, and they offer residential and commercial recycling, diverting refuse away from landfills. On weekends, many Waste Pro employees, including Jennings, can be found out in the community, helping clean rivers and roadsides. 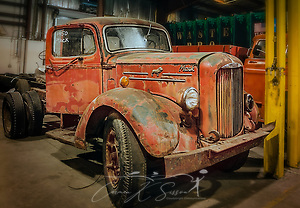 A vintage 1950 Mack truck is pictured at Waste Pro, March 18, 2016, in Sanford, Florida. The company has a garbage truck museum on the premises and restores antique garbage trucks (Photo by Carmen K. Sisson/Cloudybright)

In his spare time, Jennings scours the nation for his second passion — antique garbage trucks, which are meticulously restored and displayed at Waste Pro’s facility in Sanford, Florida. His acquisitions include a 1923 Mack A model coal truck that still has its original paint. He is now seeking a 1940’s Mack garbage truck.

He hopes his current trucks will someday take a place of honor in what he believes is the country’s only garbage truck museum, but there is a caveat — they will have to finally wear out enough to be taken out of service, he says, laughing.

His father never wanted him to follow in his career footsteps, but for Jennings, there is nothing else he would rather do.

“You have to have a passion, and I love this business — nobody loves it more than me,” Jennings says. “We like to sell ourselves as being different in the industry, and we have to surround ourselves with vendors like Mack Trucks who will do more, can do more and will step up to the plate, offering true American value. Mack is a 100-year-old company, and Waste Pro is built like a Mack truck.”