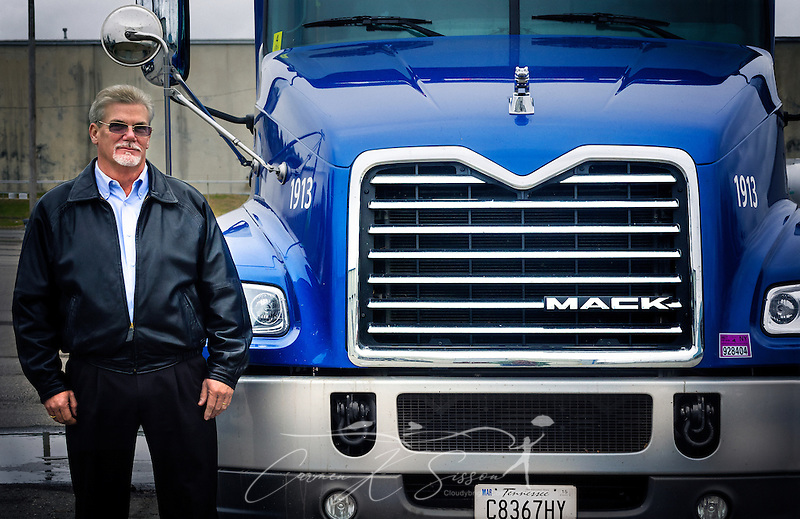 Larry Edwards, maintenance director at Highway Transport Chemical, stands beside a 2015 Mack Pinnacle truck, Dec. 17, 2014, at the company’s headquarters in Knoxville, Tenn. HTC purchased 50 Pinnacles in 2014 and plan to purchase an additional 55 Pinnacles in 2015. They were initially skeptical of automated transmissions but are now fans of the Pinnacle’s new mDRIVE 12-speed automated transmission. (Photo by Carmen K. Sisson/Cloudybright)

KNOXVILLE, Tenn. — It is a cold, blustery day in Knoxville, Tennessee, and the parking lot is vacant at Highway Transport Chemical. Larry Edwards smiles as he surveys the empty yard. This is exactly what the maintenance director likes to see: All his drivers are on the road, and all his trucks are fully functional. When you’re paid to solve problems, the last thing you need is a glitch in the system.

The family-owned company was founded in 1948, and it has developed an ironclad reputation for on-time, error-free delivery of chemical products.

Safety is critical, Edwards says, and he attributes the company’s long success to employees’ attention to detail and commitment to meeting customers’ needs. Clients can use an online portal to follow the status of their loads from pickup to delivery, and each truck uses Omnitracs communications technology for dispatch instructions, electronic logs and electronic vehicle inspection. 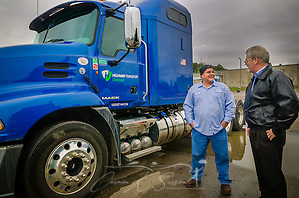 Mike Gilvin, a driver for Highway Transport Chemical, talks with HTC maintenance director Larry Edwards, Dec. 17, 2014, at the company’s headquarters in Knoxville, Tenn. Gilvin was initially skeptical of having the mDRIVE automated transmission in the 2015 Mack Pinnacle he is driving, but after only a few weeks, he is a convert. (Photo by Carmen K. Sisson/Cloudybright)

Every load comes with its own set of challenges, and Highway Transport thrives on figuring out the best way to get the haul to its destination, whether it requires specific loading or unloading procedures, a particular length of hose, heat in transit, vapor recovery fittings or a new piece of personal protective gear for the drivers.

Sometimes the hardest part of the job is coping with issues that vex the entire trucking industry — driver shortages, rising costs, and Environmental Protection Agency (EPA) mandates. When Edwards arrived at the company 18 years ago, Highway Transport had 180 drivers. Now the company boasts 260 drivers and an enviable 95 percent average capacity, but driver recruitment and retention is a full-time job, he says.

Highway Transport tackles the problem by offering a competitive pay package while searching for ways to increase driver satisfaction. Terminals are equipped with washers and dryers, vending machines, and wi-fi for drivers convenience during their off duty hours.

But the biggest draw is the equipment. As Highway Transport replaces tractors, the management team is continually looking for the same things: improved safety, more comfort and better life cycle costs.

That’s how Lloyd Oslonian, executive salesman at Worldwide Equipment in Knoxville, became an integral part of the Highway Transport team.

We like the Mack product in general. It’s just a good, solid truck that does a good job for our tanker service. ~ Larry Edwards, HTC maintenance director

Oslonian has been with Worldwide for 32 years, and he took over the Highway Transport account in 1999. He estimates he has sold between 500 and 600 trucks to the company over the years. It wasn’t hard to keep them in the Mack family, Oslonian says. It was just a matter of staying in touch with their needs and letting them know about new products coming down the pike.

Highway Transport has always been a big user of Mack Trucks, Edwards says, and the fleet operates 70 percent Mack. He likes the Mack brand for its heavy-duty strength and durability, but there was one catch: As other haulers moved to automated transmissions, Highway Transport balked, worried about specs and driver response.

Because of EPA engine emission standards and changing customer needs, the trucks are carrying more equipment — and more weight — than before. They couldn’t afford to add a heavier transmission to the load. They had a group of older Macks that Worldwide had refurbished, and they decided to stay with those while they waited and watched.

“That demonstrated to us the faith and confidence Mack has in their product,” Edwards says. “We like the Mack product in general. It’s just a good, solid truck that does a good job for our tanker service.”

The programmable features of the new engine platform convinced Highway Transport to make the switch and they quickly placed an order. After only a few weeks with the Mack Pinnacles, they decided to order 55 additional Pinnacles, all with the mDRIVE transmission.

Edwards credits Worldwide Equipment for working hard to meet their needs, but Oslonian says the Mack brand sells itself, especially to customers like Edwards, who knows what he needs from his equipment. He has helped them with their various tractor specifications of daycab and sleeper tractors and when they went from hauling chemicals and petroleum to just chemicals. But one thing never changes: When you show up at Highway Transport, you better arrive prepared.

“I owe them a lot, because they have made me a better salesperson,” Oslonian says. “They force you to know more than most salesmen might know, because I can guarantee you, they will ask questions no one has ever asked before. They’re very detailed and knowledgeable about what they do, and they will challenge you.”

Still, the Pinnacle was an easy sell, he says, and driver reception has been positive, even among those who were initially skeptical, like Mike Gilvin.

Gilvin joined Highway Transport in September 2014 and had only driven manual transmissions. “I wasn’t sure the automated could handle going up hills,” he says. “You feel like there is a little more control with shifting. But I’ve gotten used to it, and I’m doing really well with fuel. I used to average 6.5 to 7 miles per gallon, but I’m averaging 7.5 now. And they have come a long way with emissions. It’s better for the environment.”

Anyone that has ever driven a truck through Atlanta traffic would appreciate an automated transmission. ~ Larry Edwards, HTC maintenance director

The cost savings have been significant, Edwards says. Now that they’re getting 7.5 mpg, they have moved their 7 mpg trucks to their regional operation, replacing units that were averaging only 6.5 mpg.

“Most of our drivers were a little apprehensive because they have been driving standard shift transmissions for a lot of miles, and they felt they needed to be able to shift to maintain full control,” Edwards says. “After driving the trucks with the mDRIVE for a few miles, they realized that the transmission does all the work and makes driving the truck much easier. Anyone that has ever driven a truck through Atlanta traffic would appreciate an automated transmission.”

It’s safer, too, he says, because drivers can keep both hands on the steering wheel at all times — a small point, it might seem, but critical when hauling hazardous materials.

The future looks bright for Highway Transport. They reported a 2014 revenue of $74 million, and they have consistently exceeded growth targets by 5-10 percent each year. Many of their customers are Fortune 500 companies, and Edwards anticipates the addition of more trucks and terminals.If things continue to go well, even more Mack Pinnacles will join the fleet.