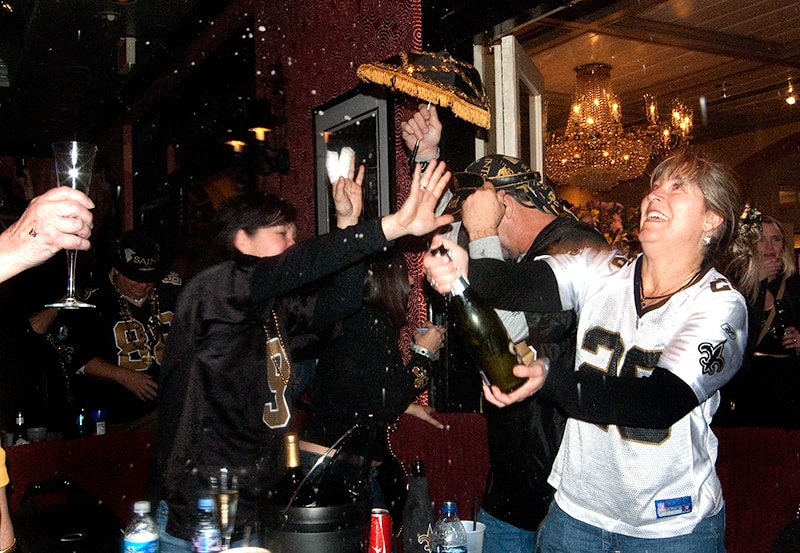 NEW ORLEANS — New Orleans has had a few days to get used to its newfound gridiron hero status, but if Tuesday night’s Super Bowl parade is any indication, the city –indeed, the entire state as well as the South in general – will be celebrating the 43-year old franchise’s first NFL championship for a long time.

As the smell of barbecue filled the air and the sounds of competing boom boxes, high school bands, and car stereos rang from the buildings, thousands of people lined the streets to cheer, welcoming the Saints home to a Mardi Gras-flavored tailgate party. Gold confetti littered the air as “the boys” waved and threw beads from atop their perches on borrowed floats.

The parade culminated at the foot of Convention Center Boulevard, where Sens. Mary Landrieu and David Vitter, Gov. Bobby Jindal, and Mayor Ray Nagin toasted the team with champagne. 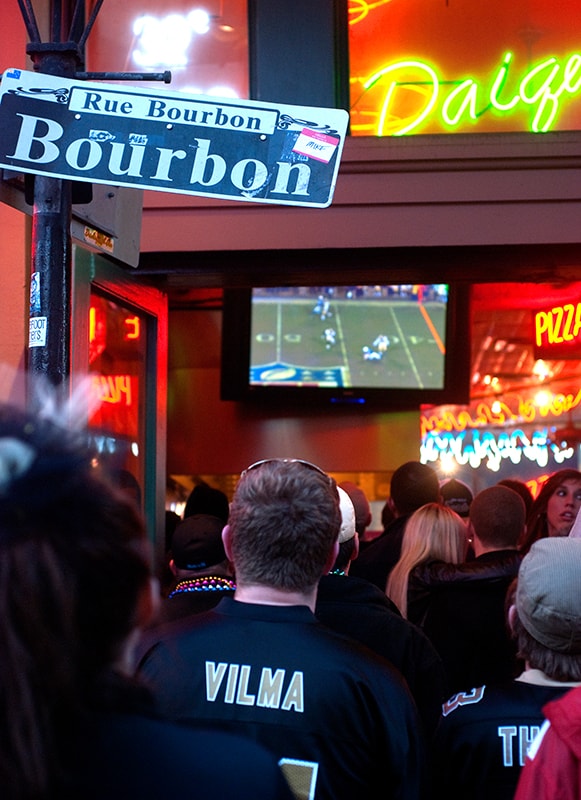 New Orleans Saints fans gather on Bourbon Street in the French Quarter to watch the Saints playing against the Indianapolis Colts in the Super Bowl. The Saints won, 31-17. (Photo by Carmen K. Sisson/Cloudybright)

It was a different atmosphere than the stunned, overwhelmed amazement in Sunday night’s French Quarter following the Saints’ win over the Indianapolis Colts. Then, no one could quite believe the news, and people couldn’t stop high-fiving and greeting one another with shouts of “Who dat? We dat!”

Tuesday’s parade had the usual bacchanalian rapscallions – fun lovers like the self-appointed “Popes of the Who Dat Nation,” who showed up in foam fleur de lis mitres and purloined Hilton Hotel bathrobes. But amid all the revelry lay something deeper – a quiet, humble appreciation for the city’s beloved team.

Debby Wood said she was overcome with emotion as she and her husband Donald drove over from Metairie Tuesday afternoon for the parade. After all the partying, reality is still sinking in, and with it comes the memory of just what this win means for not only the Saints and their devoted fans, but for all of New Orleans.

Tears welled in her eyes. “Everyone in this city was so sad,” she said, recalling the dark days following hurricane Katrina, which left the majority of the city underwater and claimed more than 1,800 lives. “We’re not sad anymore.”