COLUMBUS, Miss. — Silently, the teenager stepped from the pool, slipped a gray T-shirt over his head and walked away from his peers. If they called to him, he didn’t respond. He kept walking, out of the enclosure, beyond the chain-link fence, his eyes focused on the tree line. He reached the edge of the woods and hesitated, his eyes adjusting from sunlight to darkness. 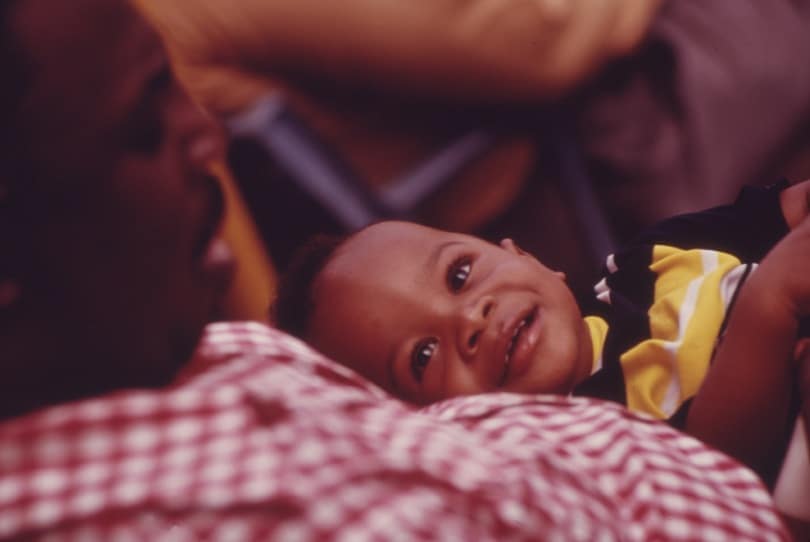 A father and son are pictured at an outdoor worship service. The National Fatherhood Initiative estimates 24 million children in American are growing up without a father in the home. Statistics show fatherless boys, once grown, are more prone to abandon their own children, perpetuating the cycle. (Photo by John H. White/US National Archives/Flickr Creative Commons

A deep voice rose above melee and shattered the stillness.

“Where are you going?”

“I thought I saw something out there.”

The teenager turned, walked back to the pool, slipped off his shirt and slid beneath the cool waters. Maybe his curiosity had been satisfied. Maybe he knew that Edward Yeates, head of Father’s Child Ministries, takes a no-nonsense approach to mentoring fatherless boys who lack, and crave, a father’s presence.  He gives them freedom, and he reins them in. Mostly, he loves them. For Yeates, it has become a passion, and this — the third annual Manhood Camp held this past weekend at Camp Pratt in Lowndes County — was an avenue to reach some for whom an absentee father has become a source of pain, anger and resentment.

Twenty-six boys, 26 chances, 24 hours to teach those on the brink of manhood what being a man truly means.

Jerome Jack, an elder at Maranatha Faith Center, attended the camp with his grandson, for whom he has had to perform the father role. He said Yeates has “a gift,” and called him “a preacher without a pulpit.”

“Some of these kids don”t have any kind of father figure except Brother Yeates,” Jack said. “They’re looking for love, and if they don’t have a good father figure, they”ll find it somewhere — the streets or gangs. Some of them would be locked up if he didn’t do what he does.”

The elephant in the room

Yeates laid down the law Friday afternoon before the teens boarded the shuttle to camp: No cell phones, no iPods, no electronics, no exceptions.

“You’ve got 24 hours to put something in their minds that will last a lifetime,” he said Saturday, as he kept a watchful eye over his charges.

Friday night, they prayed, arm-wrestled, played midnight football and gathered around a bonfire for 12 elders to symbolically “pass the torch” — and the wisdom — of manhood. Like Yeates, who is 34, the elders are steeped in Christian tradition.

I told him, ‘I forgive you, and I love you.’ It was like 1,000 pounds fell off my back. God began to chip away the hurt and disappointment. I was free. ~ Edward Yeates, founder of Father’s Child Ministries

In the darkness, they talked about what Yeates called, “the big old elephant in the room.”

Yeates was 5 years old when his father left. He didn’t see him again until he was 19.

“I always knew where he was,” Yeates said softly. “I saw him around. Growing up, my view was he was just the sperm donor.”

When Yeates became a Christian, he realized something was still missing. He felt complete, but not whole.

He went to his father’s house to talk with him.

“I told him, ”I forgive you, and I love you,”” Yeates recalled. “It was like 1,000 pounds fell off my back. God began to chip away the hurt and disappointment. I was free.”

Yeates said his father was shocked, and reconciliation was neither easy nor swift, but things are better these days.

“My view now is he is my father,” Yeates said. “No matter what hurts I may have, I respect him as my father. How can God forgive you of your sins if you don”t forgive others of theirs?”

Although the Manhood Camp focused on what Yeates called the five pillars of manhood — preparation, purpose, principle, power and partnership — it was the concept of forgiveness that brought many of the teenagers to tears.

Fatherless boys speak out: “I think he cares, but he doesn’t care enough”

Jared Jones, 18, stared at the picnic table, searching for words. This was his first year to attend the Manhood Camp, and he said he learned a lot from Yeates, whom he called “a role model and a father figure.”

Of his own father, he stopped, struggled to find the right word, then simply said: “Distant.”

For the millions of children growing up without fathers in the home, there is a deep sense of loss and pain, leaving them vulnerable to crime, poverty and other social issues. Fatherless boys are statistically more likely to end up in prison or abandon their own children. (Photo by John H. White/US National Archives/Flickr Creative Commons)

“He lives in the same city, but we never really talk much,” Jones said. “If we talk, I have to call him. Sometimes, I want him to call me. I think he cares, but he doesn’t care enough.”

“I’ve seen my father maybe three or four times,” he said. “He checks to see about my grades and my attitude, and I’m thinking, ”Why should I tell you anything?””

“Mine doesn’t live with me, but he stays in the same neighborhood,” said Juwan Roberts, 17. “He comes and sees me every now and then. He comes to some of my (football) games, and when he does, it always makes me feel good.”

This was Roberts’ third trip to the Manhood Camp, and he said lately, he’s got girls on his mind, an issue that was addressed in one of the sessions.

“If my father was in my life, I’d be a better person,” Roberts said. “I’d know how to treat a female … It’s hard without him. You don’t really know how a man (acts).”

“The session showed … all that hate inside just isn’t healthy,” Nelson said. “It touched a lot of people, including Mr. Yeates.”

Nelson said knowing Yeates has a wife and three children makes it even more meaningful to him that he willingly spends weekends with the fatherless boys in his ministry. The others agreed.

“I know I will forgive him eventually”

Jared Jones sat quietly, pondering the answers of his peers. Other kids should come to the camp to learn from people like Yeates, he said, adding that he has learned about manhood by watching the successful marriages within his family, but mainly he has taught himself.

In an earlier session, Pastor Darren Leach of Genesis Church spoke, Jones said. He told them that whether their fathers are good parents or not, they should forgive them anyway.

The three teenagers let the silence lengthen between them. In the distance, the other boys played in the pool as an elder plunked hamburgers on a grill.

No one was there.

Together they stood in unison and walked back to their peers.