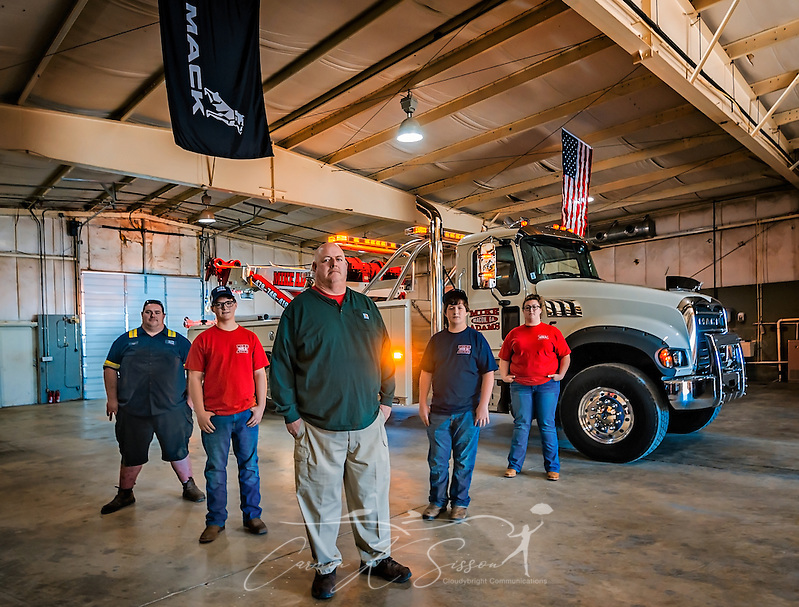 Mike Adams, of Mike Adams Towing and Air Cushion Recovery, poses with his children beside his newest truck, a 2016 Mack Granite with a 50-ton Century rotator, March 22, 2016, in Macon, Georgia. Adams is teaching the children about the business so that they can someday take over. From left are, Lane Adams, Matthew Adams, Mike Adams, Mack Adams and Megan Adams. (Photo by Carmen K. Sisson/Cloudybright)

MACON, Ga. — It’s hard to miss Mike Adam’s gleaming white Mack® trucks cruising the Interstates of central Georgia, always ready to go where they’re needed and to do what needs to be done for any highway user in need.

Adams founded Mike Adams Towing & Air Cushion Recovery in 1993 in Macon, Georgia, and started off with a 1989 Mack Superliner he still uses daily. He was 26, with a strong work ethic that carried him from humble beginnings to a state contract, several municipal contracts and 27 light-, medium- and heavy-duty trucks, nearly a third of which are Class 8 Macks. 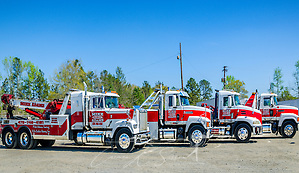 Adams became a Mack enthusiast as a teenager, and he attributes much of his company’s success to the reliability and durability of the brand.

Adams is excited about his most recent acquisition, a 2016 Mack Granite®. Though he considered purchasing the Titan by Mack, he chose the Granite model because it offers extraordinary heavy-duty performance and durability in a more maneuverable package, which allows him to work in tighter quarters.

Adams spent more than a year working on custom specs with his contacts at the Macon location of Nextran Truck Centers, Tommy Bush and David Bennett. Heavy-duty recovery is a highly specialized application, and Nextran salesmen and Mack engineers worked long hours to meet the company’s needs. 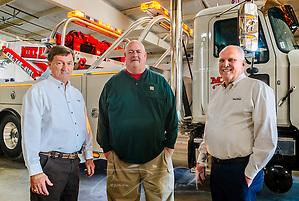 “This was a learning curve for us,” Nextran’s Bush says. “The wrecker body people didn’t realize how much Mack will work with you to get what you need for your application, from frame rail clearances to being able to move battery boxes and air boxes around. We offer some of the strongest components in the industry on our trucks, especially axles and frames.”

The three-stage rotator crane allows Adams to work more from the shoulder of the road, cutting down on lane closures and improving efficiency.

He initially worried his customers would feel forgotten in the haze of bigger contracts and bigger trucks, but he continues to treat every job as a top priority, whether he is towing a car for an individual or recovering a stranded plane from an airport runway.

He maintains trucks dedicated to special purposes, with rollbacks reserved for the general public, trucks reserved for use with sheriffs and police departments, and trucks that never leave the yard unless they are called beyond a 100-mile radius.

Towing and recovery is a 24/7 business and the fleet stays busy, with each truck averaging three to five calls per day. Adams will tow anywhere but typically stays within a 200- to 300-mile radius. He limits wreck recovery to a 50-mile radius. But even as the company — and the payroll — grows, loyal customers still ask for “Mr. Mike” to tow them home, no matter where they are.

“When I first started this business, I answered the phones, I drove the trucks, I did the bills, all out of my house,” Adams says. “It’s grown so much that I can’t get to all of them.”

Training fills the gaps. Adams sends his employees to special classes, but he also goes behind the wheel with his drivers, teaching the techniques he has learned the hard way. That’s why he appreciates the user-friendliness and easy maintenance of his Macks.

“With Macks, you don’t have a lot of problems,” Adams says. “Most of the guys service their own trucks, because (those trucks are) their living, you know? I feel like Macks are the simplest trucks to maintain.”

Their durability helps him save money, too, he says. The Superliner has more than 3 million miles on it, and he has several late ’90s models pushing more than a million miles. He is completely rebuilding one of his older Macks, but he says the cost is more than worth it. 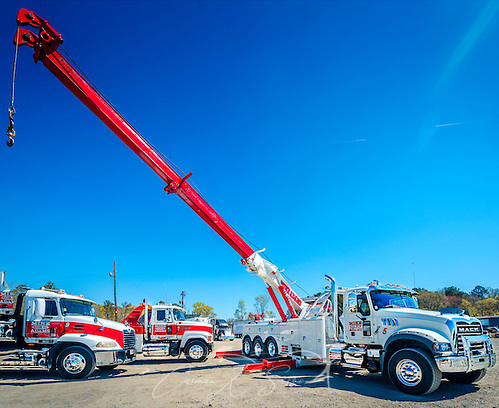 A mural painted on his office wall by his wife, Judy, features local landmarks as well as scenes of his trucks in action. In the left-hand corner, his mentor, Jesse Kitchens, stands beside a black Mack truck — a memorial, Adams says, to the man who introduced him to the business.

“He told me, ‘Mike, those Mack trucks may not be the most beautiful, and they may not be the fastest, but I promise they will take you and bring you,'” Adams says. “That’s when I first realized there was a difference.”

Equipment longevity is important not just for the company’s present but for its future as well. Adams and Judy are raising their four children to someday take over the family business, and they know that every decision they make now will determine future success. The new Granite model figures heavily into the success equation.

“I chose my time to invest in my company and in my family,” Adams says. “My children will be stepping into this someday, and I felt like that would give them a heck of a good start. It’s not just about Mack; it’s about family, too.”