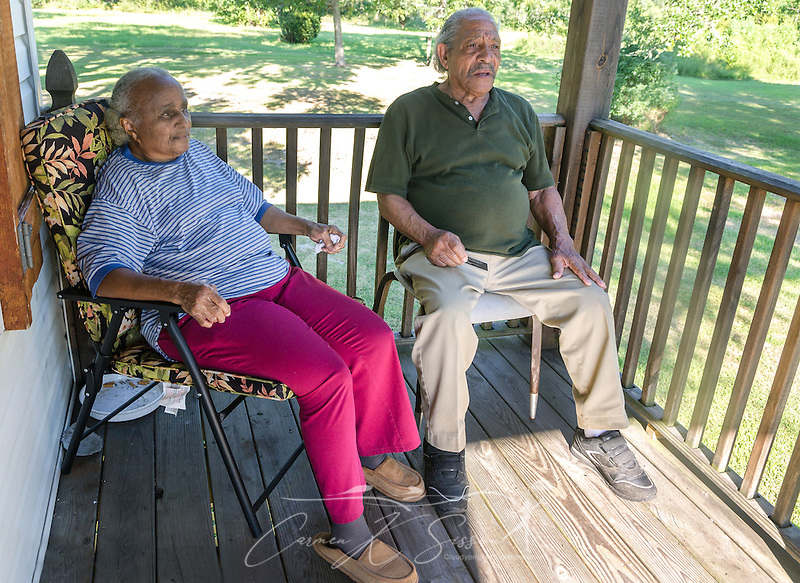 Mary and Thomas Robinson sit on their porch, Aug. 28, 2015, in Pass Christian, Mississippi. Mrs. Robinson’s brother, Arthur Meunier III, drowned during Hurricane Katrina in 2005. The Robinsons’ home was destroyed, but they have since rebuilt. (Photo by Carmen K. Sisson/Cloudybright)

BILOXI, MISS. — On any other day, in any other city, a traffic jam might be met with clenched fists and furrowed brows, but this is Biloxi, Miss., and 10 years ago, residents were desperately fleeing the Gulf Coast, hoping to find shelter before Hurricane Katrina made landfall.

The storm roared ashore clocking winds of more than 120 miles per hour, pushing a 28-foot wall of water that obliterated everything in its path, from antebellum homes to apartments, schools, and libraries. The road to recovery has been hard. As the nation turned its eyes toward New Orleans, Mississippians turned to each other. There were times they didn’t think they would make it.

So when the source of today’s tie-up proves to be a driver behind the wheel of a classic red Studebaker, people smile and wave. A trolley joins the cavalcade, shuttling tourists between casinos and restaurants. Beach buggies lumber across the sugar-white sand, and jewel-toned parasails glide across the Gulf of Mexico. It is a technicolor vision of progress – at least on this end of the coast.

Last year, the Mississippi Gulf Coast finally edged ahead of its pre-Katrina population, now serving as home to more than 386,000 people. But the farther west you go, the bleaker the picture becomes. Cities like Pass Christian, Bay Saint Louis, and Waveland have yet to recover their populace. And all three coastal counties – Jackson, Harrison, and Hancock – continue to lag in business development and job opportunities.

It is a patchwork quilt of recovery that grows increasingly threadbare the closer you get to “ground zero.”

Pass Christian has a new city hall, a new library, a new yacht club, and a bustling harbor. Bay Saint Louis has quaint shops, trendy restaurants, and a picturesque waterfront reminiscent of Charleston, S.C. Waveland has a new city hall and a Katrina museum.

But new, Key West-style condominiums – painted like pastel Easter eggs – are flanked by vacant lots festooned with faded “For Sale” signs. On some properties, a chimney or staircase tells the story of what was once there, while others hold no clues beyond the concrete slab Katrina left behind. And even these are beginning to disappear as the earth reclaims itself, burying the past beneath impenetrable layers of mud and tangled weeds. If you scratch the surface, you can sometimes find a child’s toy car or a scrap of a doll. If you look up from your task, you may see workers roofing new houses and tourists building sand castles at the water’s edge.

Emotions this week are equally mixed. Nearly every city is having a Katrina-related event, from a concert in Biloxi to a remembrance service and picnic in Gulfport. Some say they will attend the events to show their appreciation for the volunteers who came to their aid, while others say the memories are still too fresh, too raw. Most shrug and say they have moved on. They are focused on the future, not the past.

A new life in Bay Saint Louis, Mississippi after Katrina

Harry Slick grabs a corner table on the patio at North Beach Restaurant in Bay Saint Louis, settling into the happy vibe. At 68, he could be the grandfather to most of the young people here tonight, but his enthusiasm for his new home is infectious – so much so that he accidentally sold his girlfriend on the idea of moving back to the last place he thought he would ever want to return to.

Mr. Slick, a native of Philadelphia, moved to Waveland in 1996 after discovering the low cost of living and salt water fishing. He and his family rode out the storm in Hattiesburg, but they returned to a flooded house and two terrified dogs. The stench was nauseating, and the lack of familiar landmarks was disorienting.

I loved Mississippi. But when I left, I never thought I would return. This is the best kept secret. People are building, and they’re coming back. ~ Harry Slick

As the stress levels rose, everything began to unravel.

“I lost my house, I lost my job, and I lost my wife,” Slick says. “Katrina changed people.”

He bounced from state to state before settling down with his new girlfriend and buying a house in Palm Beach, Fla. On a trip to New Orleans, he asked her if she wanted to see where he used to live. She did. And she loved it.

“When she saw downtown Bay Saint Louis, she said, ‘I want to live here,’” Slick says.

In December 2014, they moved into their new home, and now there’s no other place he can imagine living.

“I loved Mississippi,” Slick says. “But when I left, I never thought I would return. This is the best kept secret. People are building, and they’re coming back.”

A few miles away, in Pass Christian, Thomas and Mary Robinson are marking a quieter Katrina anniversary, sitting on their front porch and enjoying an unseasonably cool breeze. They had heard that former president George W. Bush was speaking in Gulfport, but they have little interest in presidential affairs.

The Robinsons, both 80, grew up in Pass Christian and married when they were 17. They raised four children here in the shadow of the Gulf of Mexico, but emotions have taken a toll on them as well.

They stayed with their son in Gulfport but as soon as the waters receded and they were allowed to go home, that was where they wanted to be.

We had seen it on the news and knew we didn’t have nothing. But it’s home. All our kids were born here. We love it. ~ Mary Robinson

“We had seen it on the news and knew we didn’t have nothing,” Ms. Robinson says softly. “But it’s home. All our kids were born here. We love it.”

They have the street to themselves now. Their neighbors didn’t rebuild, and they have gradually lost contact over the years. They miss hearing the laughter of the children, and they miss their friends. Now, their neat lot is surrounded by a tangle of overgrowth.

Their new house is 14 feet above sea level, but Mr. Robinson knows that if another Katrina comes ashore, the simple shotgun house will be no match for the storm surge. He keeps a wary eye on the Gulf, ready to carry his childhood sweetheart to safety at the slightest inclination that a tropical system is headed their way.

Ms. Robinson knows the dangers of trying to ride out a storm. Her brother, Arthur Meunier III, 63, refused to leave, even after she sent Pass Christian police officers to intervene. He enjoyed fishing and crabbing, and, like his sister, he loved being at home. When she evacuated, she thought he left, too.

Three months after Katrina, she learned that her beloved “Tanna” had drowned inside his house. He was one of 28 people who died in Pass Christian; one of 238 people Katrina killed in Mississippi.

“All the brick buildings were gone; we didn’t have none standing,” she says. “But that brother of mine …”

As her voice trails, Mr. Robinson stares at the wooden porch floor. Lately, he worries that Ms. Robinson will get lost walking the few short feet to their mailbox. She wanders, he says. He vowed to take care of her in sickness and in health, and as long as he is able, that’s what he will do.

As dusk deepens to dark in Pass Christian, the employees at Hook Gulf Coast Cuisine mill around the door, tending to a mostly empty restaurant. Business is so slow tonight that they had considered going home early.

Angela McDonald, 33, talks as she doles out menus to the few customers who straggle in for a late night seafood supper. She was a dental assistant before Hurricane Katrina took her job, but she hopes to someday return to the profession. Meanwhile, she is filling in as a waitress to help a friend.

Ms. McDonald grew up in the adjacent town of Long Beach and fled Katrina with her parents and two-year-old son. Like many, she saw the television coverage of the New Orleans storm damage before she learned the fate of her own city. She drove home with a growing sense of dread. She lived far enough inland that she wasn’t worried about her house, but she worried about her friends and neighbors. The devastation she saw left her troubled and physically ill. She felt helpless. So she took a job as a counselor for Project Recovery – which forced her out of her comfort zone and straight into the heart of more suffering than she had ever seen.

Every evening, she went home to a hot shower and MRE’s (Meals Ready-to-Eat), but that seemed like a luxury compared to what she saw on the streets. She spent her days knocking on doors, asking, “Are you ok? What do you need? Can I help?”

Some people needed water or baby formula. Most just needed someone to listen.

She lays a stack of menus on an empty table and sits down, fighting tears as she struggles to find words.

It was hard to feel sorry for myself when people lost their kids, their spouses. We had people living out on the streets in sleeping bags. Being able to help them made me feel better. ~ Angela McDonald

“I saw a lot and heard a lot,” she says. “It was hard to feel sorry for myself when people lost their kids, their spouses. We had people living out on the streets in sleeping bags. Being able to help them made me feel better.”

There are times she wishes she could forget Katrina, but it’s impossible. The reminders are everywhere. There are times she wishes she could remember what the Mississippi Gulf Coast was like before Katrina erased it all, but she was young and the years are passing quickly. She can barely recall the lovely Victorian homes and the way people could leave their doors unlocked without fear.

Katrina changed the coast and it changed her, too, she says. But one thing did not change — Katrina did not kill her affection for the place where she grew up. She never considered moving away, and if another Katrina strikes, she still won’t consider it.

But on dark nights, she finds herself staring out into the blackness, thinking about the Gulf of Mexico as it tosses restlessly against the shoreline. She wonders what lurks beneath the surface, she says. Pieces of the old homes she thought were so beautiful. Wedding pictures. Baby toys.

She stops and shudders, rubbing her eyes wearily. She thinks she will take a drive when she gets off work, she says. She wants to see the moon shining in the water. She wants to remind herself that even in darkness, there is light.