New Orleans takes fight against homelessness to the streets 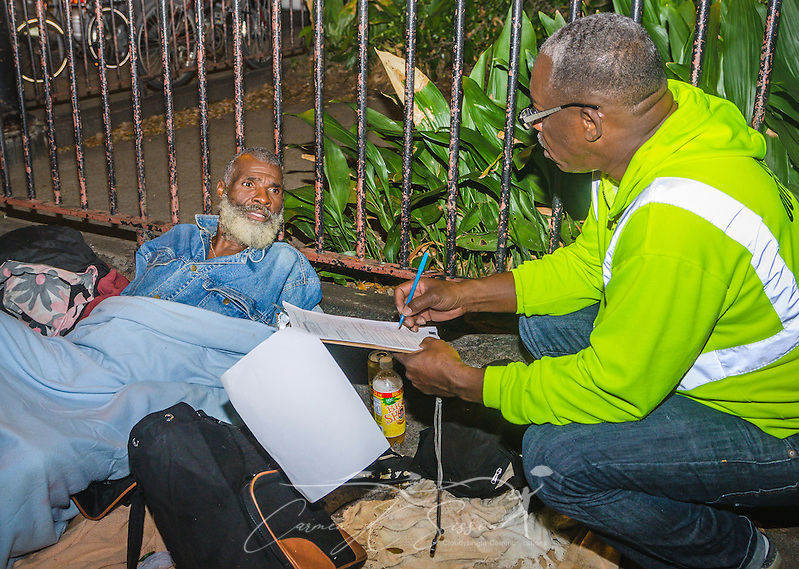 UNITY outreach worker Clarence White, right, tries to determine how much assistance James Watson will need, Nov. 11, 2015, in New Orleans, Louisiana. Watson, 57, has been homeless for 10 years and was found sleeping at Washington Square. UNITY, a 60-agency coalition, provides housing and services for people who are homeless. (Photo by Carmen K. Sisson/Cloudybright)

NEW ORLEANS — It is a weeknight, but the New Orleans French Quarter is thrumming with life, awash in its proverbial joie de vivre. Clarence White hunches over his steering wheel, his eyes constantly moving as he searches for a scrap of blue in a neon sea.

“There,” he says, veering toward the sidewalk and leaping from the van. His colleague, Kathleen North, follows. Along a fence line – where the light meets the shadows – they see a blue blanket. 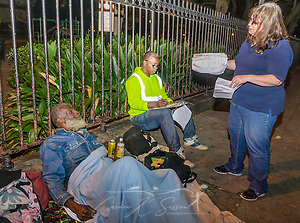 UNITY outreach workers Kathleen North, right, and Clarence White, center, try to determine how much assistance James Watson will need, Nov. 11, 2015, in New Orleans, Louisiana. Watson, 57, has been homeless for 10 years and was found sleeping at Washington Square. (Photo by Carmen K. Sisson/Cloudybright)

Mr. White and Ms. North are outreach workers with UNITY of Greater New Orleans, a 60-agency collaborative of state, local, and federal partners dedicated to ending homelessness in a city still recovering from 2005’s hurricane Katrina. January marked a highlight in the fight: Only 1,703 people remained homeless, after a post-storm high of 11,600 in 2007. Last year, UNITY ended homelessness for veterans altogether, taking 227 former military people off the streets.

Now the team is focusing on other vulnerable groups, using an innovative model that is being closely watched by other cities across the country. Most unusual about UNITY’s approach is what White and North are doing – scouring streets and abandoned buildings to find people who need help. In most cities, the homeless don’t get assistance unless they walk into a shelter or are picked up by authorities.

As they approach Washington Square, White and North see a blanket moving. “You might not want to come close because of the smell,” says James Watson, the man under the covering.

White shakes his hand and sits down. He has worked with the homeless for 25 years. There is little he hasn’t seen, smelled, or experienced. Like most members of the UNITY team, he lost his house in hurricane Katrina. He knows how that can break a person, physically and emotionally. 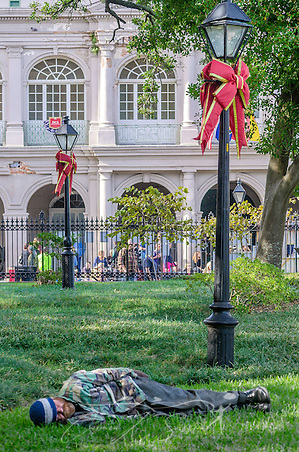 Mr. Watson has been homeless for 10 years and was recently hospitalized but remains in need of help. As White takes notes, North calls a doctor who treats the homeless. Watson will be in a clean bed and getting medical attention soon. “I hope tomorrow brings something better than today,” he says.

Later, White makes a few more stops, doling out snacks and clothes, then ends his night at the city library, where a veteran he knows often sleeps. White tries each week to persuade the man to accept housing, but so far, he is intractable. “I’m considering my options,” the veteran says.

White will try again next week. “I’ll never give up on him – or on any of them,” White says.

A different approach to ending homelessness

UNITY, founded in 1992, gets funding from the US Department of Housing and Urban Development, along with the city and state. New Orleans had always struggled with homelessness, but hurricane Katrina brought new challenges. By 2007, more than 80,000 buildings stood vacant. People who lost their homes took refuge in the abandoned structures. Low wages and grinding poverty exacerbated the problem. More recently, as New Orleans has recovered, escalating housing costs have forced other people into the streets.

The traditional approach in dealing with the homeless was to provide services to those who requested them. Occasionally, groups passed out sandwiches. But there was little organization, and resources often overlapped. The UNITY team realized that the people who needed help the most were the ones least likely to seek it. To solve the problem, they had to leave the office. 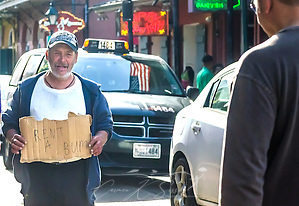 Outreach teams load their vans with granola bars and water and head into the dark, armed with nothing more than flashlights, clipboards, and hand sanitizer. They search the streets in the daytime, looking for signs of life such as bedrolls. At night, they return, hoping to find the owners. Sometimes they are asked to leave; other times, they are hailed as angels of mercy.

In June 2014, first lady Michelle Obama challenged city leaders across the country to end veteran homelessness by the end of this year. New Orleans Mayor Mitch Landrieu tightened the deadline to 2014. UNITY met the challenge. All newly homeless veterans are housed within 30 days, with the average wait time being 21 to 26 days.

“They’ve been real leaders in the abandoned building searches and the degree of partnership,” says Steve Berg, vice president for programs and policy at the National Alliance to End Homelessness. “A lot of places learned from New Orleans’ example.”

Another key strategy is Housing First. Previously, people moved through various levels of shelters and transitional housing as the city tried to address the causes of homelessness. Housing First, a nationwide initiative, gets people into time-limited or long-term housing before addressing other issues. Placement is independent of income, sobriety, or compliance with other services. Case managers track individuals throughout the process.

“The communities that have shifted to Housing First are making the most progress,” says Matthew Doherty, executive director of the US Interagency Council on Homelessness. 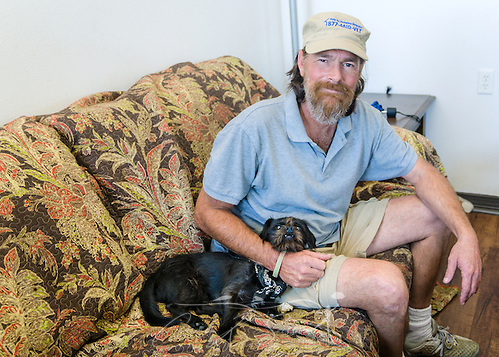 Veteran Darren Dalpiaz is pictured in his new apartment, Nov. 12, 2015, in New Orleans, Louisiana. Dalpiaz, 49, was homeless for 25 years before moving into Sacred Heart Apartments, a community of formerly homeless veterans and non-veterans. Dalpiaz was the last of 227 homeless veterans housed by UNITY. (Photo by Carmen K. Sisson/Cloudybright)

Darren Dalpiaz was one of the last veterans given housing, moving into his new apartment last December. The 109-unit building houses veterans as well as nonveterans. Caseworkers and support services are downstairs.

But Mr. Dalpiaz wasn’t always sold on the idea. When the UNITY team came to his camp one night, he ran. Eventually, they won him over. On the day he moved into his new home, he declared it one of the happiest of his life. And then he slept on the lawn for two weeks.

It has taken a year for him to hang his clothes in the closet.

“Wherever I lay my head is my home,” Dalpiaz says. “But I call this my forever home.”