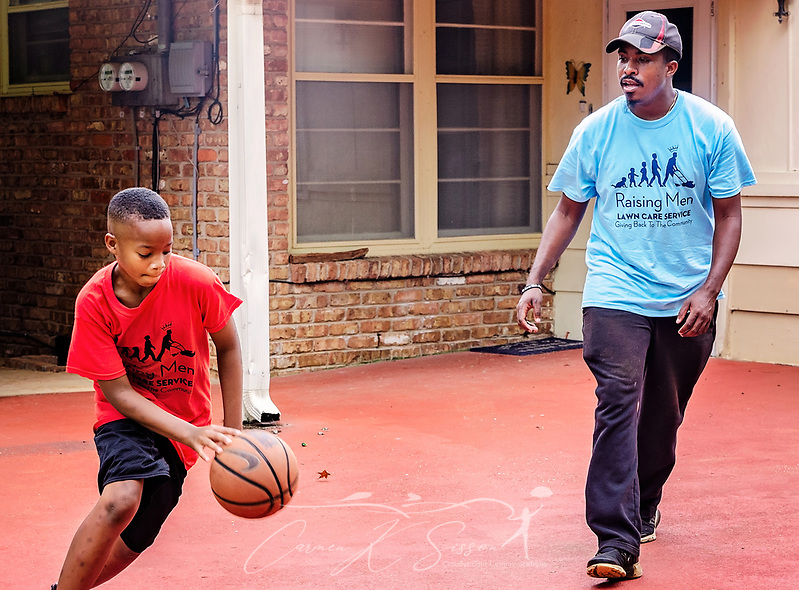 Quay Knight dribbles a basketball as Rodney Smith Jr. offers suggestions on his technique, Aug. 1, 2018, in Huntsville, Ala. Quay, along with his brother, Lamar, is among more than 250 youth cutting grass as part of Raising Men Lawn Care Service, a non-profit organization Smith founded which provides free lawn care for the elderly, disabled, veterans, and single mothers. (Photo by Carmen K. Sisson/Cloudybright)

HUNTSVILLE, Ala. — The two brothers stand in the carport in Huntsville, Ala., and stare up at the cloudy sky, scuffing their shoes against the concrete and frowning. If it rains, they won’t be able to cut grass. A black SUV pulls into the driveway, and their frowns turn to smiles as they rush to greet the man inside — Rodney Smith Jr., whose grin is even bigger than theirs.

Three years ago, Mr. Smith began a volunteer lawn service, cutting grass free for elderly and disabled people as well as veterans and single mothers. He quickly realized the need was greater than one man with a push lawnmower, so he began recruiting youths ages 7 to 17 to give their time and muscle to the cause. 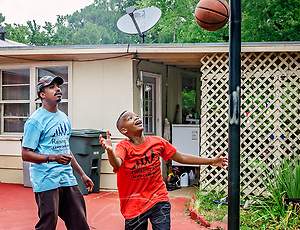 Rodney Smith Jr. watches as Quay Knight makes a basket, Aug. 1, 2018, in Huntsville, Ala. Quay, along with his brother, Lamar, is among more than 250 youth cutting grass as part of Raising Men Lawn Care Service. (Photo by Carmen K. Sisson/Cloudybright)

Today, more than 230 young people volunteer with the nonprofit Raising Men Lawn Care Service. Together, they have cut 2,000 lawns in 50 states and four countries. And slowly, Smith has gone from not only being a philanthropist but also a mentor to children in need of a positive male role model.

Lamar Knight, 13, and RaQuaveus “Quay” Knight, 10, began cutting grass for Raising Men last year. Today, Smith is presenting a black T-shirt to Lamar in recognition of the 50 lawns he has mowed. Participants receive colored T-shirts for every 10 lawns, somewhat like the karate belt system. Quay will have to cut a few more lawns to earn his reward, but he smiles as he watches Lamar pull the black shirt over his head and model it for everyone.

When Smith learns they have been working on their basketball skills, he immediately grabs a nearby ball.

Initially, the boys’ mother, Leslie Knight, hoped the lawn care service would teach her boys responsibility, work ethic, and community giving. But over the past year, she has seen them mature in ways she never imagined possible. Lamar is more focused and confident, less restless and impulsive. Quay no longer stays inside all day, watching cartoons. Both have lost their fears of power equipment and are more comfortable talking to strangers of all ages.

Smith takes his role as mentor seriously, instructing his young grass cutters to shake hands and introduce themselves to homeowners. Eye contact is a must, as is speaking loudly, clearly, and politely. He also has them order their own food when he takes them out to eat.

“Rodney is teaching the kids social skills, and that’s something they needed,” Ms. Knight says. “They didn’t have the social skills, no matter how much I tried to teach them. Working with the public is getting them out of their shyness.”

Knight knows the pressures young men face, especially those growing up without fathers. She sees a never-ending stream of angry young men passing her yard every day. They run the stop signs in front of her house. They sell drugs on the street corner. Gun shots are so frequent in her neighborhood that she has taught her sons to run to the bathroom and lay down in the bathtub when they hear gunfire. They are able to play basketball today only because they are at their grandfather’s house, where he also stores their bicycles, scooters, and other toys. At home, it’s not safe for them to play outside.

“Raising Men is a really good program for kids,” Knight says. “It teaches them to be a blessing to others, to not be selfish. We’re here to serve one another, and the more we come together as a community, the more things can prosper. We can’t prosper in all this violence.”

Huntsville city councilman Devyn Keith is familiar with the impact Smith has on the children he works with. “He teaches the kids that if you see a problem and have the ability or the resources to change it, then it’s not only something you should do, it’s a necessity in order to have a more productive community,” he says. “There is value to be had in reassuring and refortifying good kids to stay good, reminding them that beyond basketball, beyond celebrity, there are a number of roles they can play to have a positive impact.”

With a lawnmower and a prayer

Across town, Mary Gibbs leans forward in her brown corduroy chair, peering through her dimly lit living room to see the lanky man opening her unlocked screen door. When she sees Smith’s face, she leans back in her chair and grins.

Ms. Gibbs, 78, has lived in this Huntsville neighborhood for more than half a century, but she doesn’t have company often, so she’s always happy to see the man she affectionately calls her “adopted grandson.” It’s a moniker he wears lightly, with easygoing humility. Years ago, everything was going wrong in his life, and he didn’t know what to do.

“I had a breakdown,” Smith says softly, ignoring the three iPhones constantly buzzing in his hands. “I said to God, ‘look things are not working out here. I need you to use me as your vessel.’ ”

“He becomes a small chapter in everyone’s life story, some bigger than others. They remember how Rodney cut their grass or Rodney brought them food. That’s a beautiful story. Huntsville is a better city by having someone like Rodney to call our own.” ~ Huntsville City Councilman Devyn Keith

The answer didn’t come that day or the next or even over the next year.

He was a student at Alabama A & M University in Huntsville when he saw an elderly man struggling to cut grass. Smith, a native of Bermuda, says he automatically knew he had to help that man. As he made his last swipe around the yard, Smith felt relief wash over him. This was God’s plan. It had to be, he thought. It felt right. 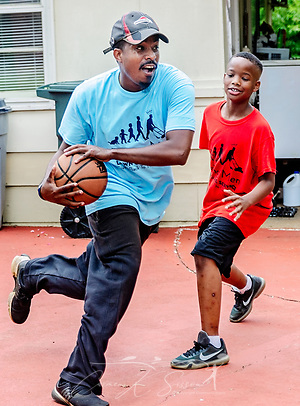 Rodney Smith Jr. dribbles a basketball as Quay Knight watches, Aug. 1, 2018, in Huntsville, Ala. Quay, along with his brother, Lamar, is among more than 250 youth cutting grass as part of Raising Men Lawn Care Service. (Photo by Carmen K. Sisson/Cloudybright)

Since then, his work with Raising Men Lawn Care Service has been recognized by Queen Elizabeth (Smith’s native Bermuda is part of the British Commonwealth) and by those who supply Smith’s equipment. Briggs & Stratton, a lawnmower engine company, told the Huffington Post in June that Smith’s efforts embody “our company values around empowering people.”

That empowerment quickly made a difference in Mr. Keith’s district. When Keith originally took office, the area had a number of eyesores and problems, from overgrown yards to littering. Residents were frequently fined $70 to $340 for the condition of their yards. Keith and Smith talked often about the problem and even cut grass together from time to time, doubling down on efforts to clean up the district and help those who were unable to mow their own grass or hire a lawn service.

“He becomes a small chapter in everyone’s life story, some bigger than others,” Keith says. “They remember how Rodney cut their grass or Rodney brought them food. That’s a beautiful story. Huntsville is a better city by having someone like Rodney to call our own.”

Ms. Gibbs says Smith is the answer to her own prayers. As he perches on a chair, skimming through messages on his phones, she talks about her own crucible of faith. Her husband died in 2000, and eventually, her health was too poor to continue her job at Walmart. Her children grew up and moved away. For a while, she paid people $40 to cut less than a quarter-acre of grass. But eventually, even that became cost-prohibitive. The city fined her once because her grass was too high, and that was a constant worry.

As she speaks, her oxygen concentrator hums, its tubing crisscrossing throughout the house and snaking around her chair. Silver and green oxygen tanks flank the walls – if she wants to leave the house to check the mail, the tanks must come with her. Cutting grass is out of the question. A neighbor sometimes cut it for free, but over time, he began cutting it without her knowledge, then banging on her door later, pointing out the freshly-mown lawn and asking for payment. It was stressful. 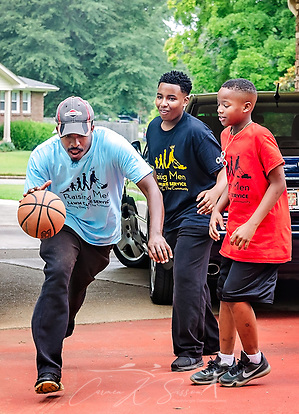 Now Smith and the children show up every two weeks to cut the grass. In the fall and winter, they blow leaves. The good deed does as much for her emotionally as physically.

“It’s nice to come home to a neat yard,” Gibbs says. “It makes you feel better. They use their own plastic bags and lawn mowers. They don’t charge you for anything.”

Yesterday, she spent $30 to take a cab to the doctor. Having Smith handle the lawn care for free is a relief, she says, because it allows her to use that money for other things like food, medicine, and transportation. Sometimes, like today, he drops in just to say hello and lift her spirits. As he stands to leave, she asks when he’ll return.

“I’ll be back tomorrow,” Smith tells her. “I’ve got some trim work to do.”

As Smith walks to his car, Gibbs points out a dog on the television. She loves dogs but can’t have one anymore. She likes it when Smith brings his brown-and-white puppy, Neiko.

“When Rodney first came, I figured he’d cut the grass a few times but eventually wouldn’t come back,” she says. “But then he came back all winter. It gives me somebody to talk to.”

Back at their grandfather’s house, Lamar and Quay are losing badly to Smith.

“Better stick to cutting grass, fellas, because basketball is not your game,” he teases. Quay returns the taunt, but Lamar is determined to make the last basket. He misses. Game over.

“All right, you lost, now what do you do?” Smith asks. The boys shake hands and thank him for playing a good game, laughing as he scruffs their hair and mock wrestles with them.

Tomorrow, they’ll cut grass, they say. They’re good at that. Getting better every day.