Sunoco lightens up with Mack 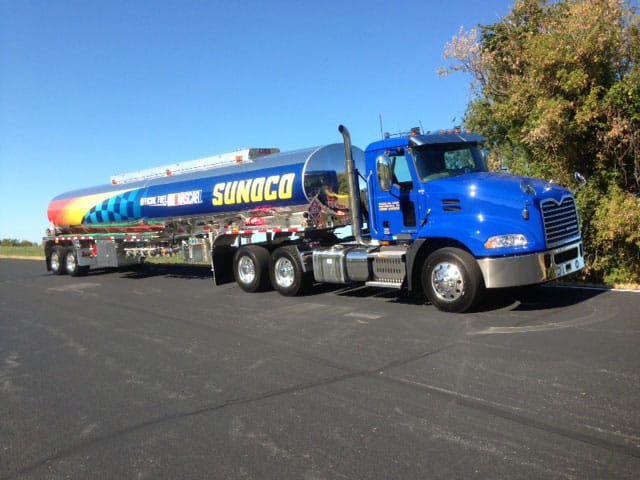 Mack Trucks provided the qualities Sunoco needed to get the job done. (Photo courtesy of Sunoco)

PHILADELPHIA, Pa. — Sunoco was rapidly expanding its footprint across the nation and needed a truck manufacturer that could keep pace with company goals. It had five major requirements: the tractors needed to be lightweight, driver friendly, fuel efficient, powerful and good-looking. Mack Trucks provided all that and more, says Bob Manchester, Sunoco’s senior director of Transportation/Operations.

The Philadelphia-based company was founded in 1886 and quickly became a leader in the oil and gas industry. Today, Sunoco operates in 30 states, has approximately 1,340 convenience stores and retail outlets, and distributes fuel to more than 6,800 sites, with Mack® trucks leading the way.

The fleet is comprised of 225 tractor-trailers, and truck and trailers, including about 50 Mack Pinnacles™ in various configurations. Manchester says Sunoco has three tractor specs, plus one truck spec for Hawaii: 107,000 lb. GVWR for New York State and Long Island, Massachusetts and Rhode Island, an 80,000 lb. spec for the majority of states they operate in, including Hawaii, and a New York City spec tractor that’s also 80,000 lb. The New York City tractor has a much shorter wheelbase to accommodate tight delivery locations in the city. The Hawaii spec is also 80,000 lb., but is longer for a 4,500-gallon tank. For the heavier GVWR tractor and Hawaii truck, Sunoco uses 6×4 axle back Pinnacle tractors powered by a 13-liter Mack MP®8 505 hp engine, with 1,860 lb.-ft. of torque. For the lower GVWR tractors, they use a 6×2 suspension with a dead tag axle and are powered by an 11-liter Mack MP7 405 hp engine, with 1,560 lb.-ft. of torque. All are spec’d with mDRIVE™ transmissions.

Weight is everything to us. We want to squeeze every bit of weight out so we can haul more gallons. The more gallons we can haul, the fewer trips we have to make, and the cheaper it is to distribute fuel. ~ Bob Manchester, Sunoco senior director of transportation/operations

The biggest success story is the weight of the truck, says Jim Layman, senior account executive at Bergey’s Truck Center in Conshohocken, Pennsylvania. The Sunoco tractors were spec’d with input from Manchester, Mack engineers and sales professionals in order to take advantage of every weight saving option, without sacrificing safety or efficiency.

“When every pound counts, a lighter engine is also critical, and the MP7 meets that need. The 6x2s are really helping us with fuel economy,” Manchester says. “Our fuel savings has improved, and with this design we also reduce weight and improve power, with the drivetrain running through only one axle (which means fewer moving parts). Weight is everything to us. We want to squeeze every bit of weight out so we can haul more gallons. The more gallons we can haul, the fewer trips we have to make, and the cheaper it is to distribute fuel.

“We save approximately $750,000 annually for every additional 100 gallons we can load on our units,” he says. “Since I came to Sunoco in 2008, we have improved gallons per trip by 300 gallons, which with the size of our fleet, equates to about 9,500 less loads we have to deliver annually. You can do the math; this improves our bottom line because we can move more product with less equipment and fewer drivers.”

Manchester has been particularly impressed with the mDRIVE automated manual transmission. Layman knew the switch from 10-speed manual to mDRIVE might be difficult for some drivers, so he held a special orientation and demonstration for Sunoco. At the end of the day, the drivers were sold on the benefits, especially the way the automated transmission allowed them to focus on driving instead of shifting gears.

Maneuverability is a factor as well, especially in a retail application, where drivers face stop-and-go traffic and stations with tight footprints. It’s a challenging application, but drivers benefit from safety options like a one-piece windshield, backup cameras, fender mirrors and a sloped hood for greater visibility.

The trucks are highly visible to the public, too. No expense is spared, from the fully optioned blue cabs and polished aluminum fuel tank, air tanks, and wheels, to the top of the line Rawhide interior trim package. They garner considerable attention wherever they go.

We buy top of the line tractors, with all the bells and whistles for our drivers. We care about our drivers, and want them in the best equipment to enjoy their time on the road. ~ Bob Manchester, Sunoco senior director of transportation/operations

“We buy top of the line tractors, with all the bells and whistles for our drivers,” Manchester says. “We care about our drivers, and want them in the best equipment to enjoy their time on the road. In addition, I’m a big image guy, and our trucks are rolling billboards for our company. This also helps us attract the best and safest drivers. Safety is our top priority and our safety record is our license to operate. The Macks are driver friendly, and the fit and finish, and overall look of the tractor is first class.”

He likes the resale value as well, especially in the Northeast. He retires trucks after five years or 500,000 miles, but the Macks still have plenty of life remaining for the next company that will use them.

Layman and the other staff members at Bergey’s Truck Center remain in close contact, making sure the Mack Fleet is meeting Sunoco’s needs. Thanks to Mack’s telematics platform, GuardDog® Connect, downtime has become a distant memory. After-sales support is key to customer satisfaction, Layman says, and he believes it is a quality that sets Bergey’s, and other Mack dealerships ahead of their competitors.

Manchester remains focused on reducing tare weight, and improving safety and efficiency. But for now, he is pleased with his latest purchase, and likes what he sees on the road ahead.

“Macks were new to us, but Jim and Bergey’s sales staff, as well as Mack’s corporate staff, have really gone out of their way to be there for us. They have gone the extra mile, and that makes a big difference,” he says. “ There’s a lot of focus around the customer, and that’s impressive. Service has been excellent.”