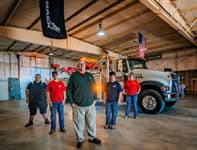 A few vehicles dot the parking lot of New Hope Methodist Church in suburban Atlanta, but there’s no sound except the rumble of idling motors. Slow rain becomes a torrent, blowing in wide sheets, obscuring the pastor standing on the church steps as he delivers his sermon. Drivers flick their windshield wipers to life and stare straight ahead. They won’t leave their steel cocoons any time soon. They won’t need to: The sermon booms from their radios like Carrie Underwood.

She says while she supports tonight’s event, it’s going to take a lot to heal race relations in Ashburn, a town where people still refer to the railroad tracks separating the white and black neighborhoods as “the line.” She points out that just last week, a group of white students held a private prom at a nearby marina, heedless of this week’s prom, which had been heavily announced and heralded by what the local weekly newspaper called a “media storm.”