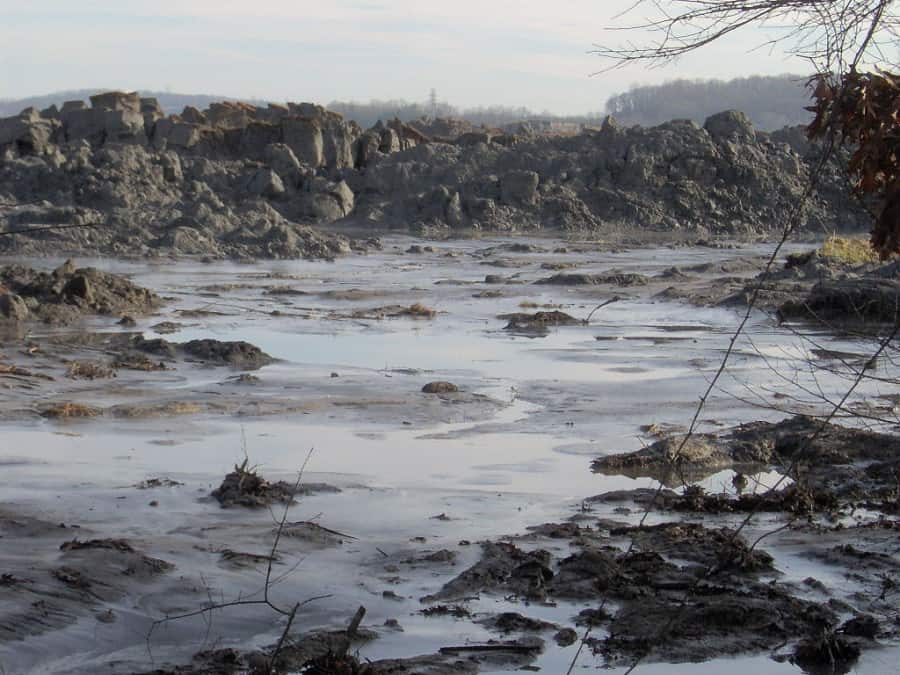 The TVA Kingston Fossil Plant fly ash spill is pictured, approximately one mile from the retention pond. This view is from just off Swan Pond Road. The pile of ash in the photo is 20-25 feet high and stretches for two miles or so along this inlet, which empties into the Emory River. (Photo by Brian Stansberry)

KINGSTON, Tenn. — For Tennessee firefighter Chris Copeland, responding to disasters is a way of life, but three days before Christmas, his world was shaken to its foundation when the rescuer found himself in a new role — survivor. 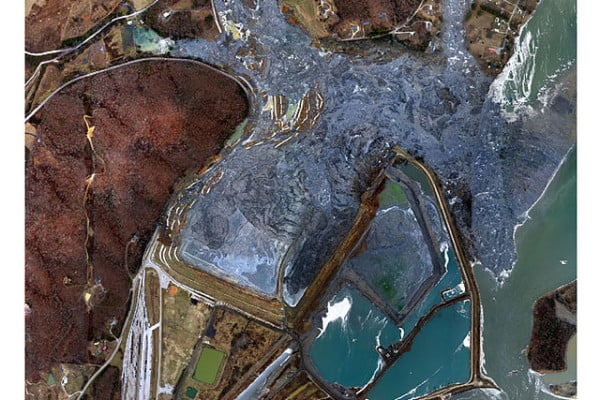 Just after midnight Dec. 22, while Copeland lay sleeping, an earthen dike gave way on the north side of Tennessee Valley Authority’s Kingston Fossil Plant in Kingston, Tenn. Within seconds, 5.4 million cubic yards of fly ash — a by-product of coal combustion — oozed into the Emory River, gaining speed until the glossy, debris-laden sludge roared through the Swan Pond area, leaving three homes destroyed and 42 damaged. Copeland says the sound was deafening; he thought it was a tornado.

The power was out, so he fumbled for his clothes in the dark and hurried to his car so he could use the headlights to illuminate his backyard. In the dim yellow glare, it looked like a lunar landscape, barely resembling the tranquil place where people fish for crappie and pleasure boats gleam in the midday sun. Uprooted trees raced past the tangled remnants of his dock. Pieces of his neighbor’s home were mixed among them.

As he struggled through waist deep water, ignoring the frigid wind and debris that banged against his body, he prayed there were no injuries and breathed a sigh of relief when he reached the first house. It was surrounded by mud, and the porch columns had been swept away, but in the upstairs window he saw a light bobbing as the homeowner carried a flashlight, inspecting the damage.

He moved on to the next house. It was no longer there. It had been pushed 50 feet across the road and up an embankment and was now resting in a small field. In the window, he saw his neighbor, who was afraid to venture out because he couldn’t see what lay beyond. Copeland, along with Roane County Emergency Services first responders, pulled him from the wreckage.

“His house was so jumbled,” Copeland says. “It was like taking a playhouse with all the furnishings and shaking it.”

This is not a time that TVA holds its head high, but we don’t hang our head either.” ~ Tom Kilgore, president of the Tennessee Valley Authority

“This is not a time that TVA holds its head high, but we don’t hang our head either,” he told the crowd.

He said while TVA believes the dike was weakened by rapidly changing temperatures combined with this month’s record rainfall — five inches as opposed to the average 2.8 inches — the cause of failure is irrelevant. TVA is currently examining alternate methods for fly ash containment, including dry stacking or offsite storage.

Though there have been no similar incidents of fly ash spills at TVA’s other 10 coal plants, the Kingston plant is also the only one that keeps fly ash pools above ground. Because of rapid residential growth in the area, there was little room for the plant to expand. Rather than relocating, more than 50 years of ash was stacked into a wet mound extending 55-feet high. Small breaches in the dike were repaired in 2003 and 2006, but TVA inspected it in January and reported no problems, declaring it within legal limits imposed by the Environmental Protection Agency.

But some residents and environmentalists say more should have been done to prevent the failure, and they worry about possible toxins in the water. Last week, following extensive testing by EPA, TVA, and the Tennessee Department of Environmental Control, the three groups reported elevated levels of mercury, thallium, and arsenic, and warned residents to avoid direct contact with the muck. TVA officials have said the only risk the fly ash spill poses to homeowners are those who use well-drawn water, but residents say the testing results alarm them, and they’re afraid to have contact with the water — outside their homes or inside.

Activists with United Mountain Defense, a non-profit organization dedicated to eradicating mountaintop coal mining removal in Tennessee, say even if the water proves to be safe, it’s prudent to take precautions.

One woman we spoke to said she and her husband…went to bed in one of the most beautiful, biologically diverse places and woke up in Mount St. Helens. ~ Chris Irwin, staff attorney for United Mountain Defense

Staff attorney and board member Chris Irwin says his organization was on the scene the following morning, collecting water samples and talking to residents.

“On Christmas Day, we were out there delivering bottled water,” Irwin says. “One woman we spoke to said she and her husband…went to bed in one of the most beautiful, biologically diverse places and woke up in Mount St. Helens.”

He’s frustrated by the lack of local as well as national response.

“Their voice hasn’t been heard,” he says. “In the Appalachians, we had this huge, potentially toxic ecological disaster. Why hasn’t there been a response? It’s kind of shocking. Where’s FEMA?”

Irwin has harsh criticism for TVA as well, saying he’s had reports of people and pets becoming ill after drinking or bathing in water from their home faucets following the spill, but those reports have not been substantiated. He says TVA should have taken a stronger approach in warning residents.

“You assume the worst and prepare everybody to deal with the worst; then you can back out,” Irwin says. “It seems like TVA’s done the opposite, treating it as a public relations campaign. They’ve placed a lot of people’s health potentially at risk, and that’s unconscionable.”

Chris Davis, spokesman for the Knoxville chapter of the American Red Cross, says they’d like to do more, but their efforts have been thwarted. Roane County Emergency Services initially requested water canteens for emergency workers, then called again requesting shelter, which the Red Cross set up at Roane State Community College. Davis says only one family took advantage of the shelter, and 50 emergency workers were fed.

“By noon the next day, we heard from TVA, and they said they would take over all emergency feeding and lodging,” Davis says. “We’ve essentially been out of it ever since. It’s uncommon for anyone to say, ‘We’ll take care of everything; thank you for your service.’”

If three people walk in that door, then we’ve at least listened to three people. It’s important for them to know there’s a listening ear somewhere. ~ Joann Hale, Church World Service

Hale has a unique entry point with survivors: She lost her own home in the late 1970’s when residents of Love Canal, a picturesque neighborhood in New York, discovered they were sitting atop nearly 21,000 tons of toxic waste. Hale says at the time she felt abandoned by her church, left to navigate the emotional wasteland alone.

“The church wasn’t there,” she says, “It was very disheartening. You begin to lose your faith. You saw churches coming together for the boat people of Vietnam and Cuban refugees, but no one was responding to Love Canal. There were 1,300 families affected, but nobody could tell their story.”

Hale, who also works with the Technological Disaster ministry of the United Church of Christ, now specializes in disasters like the coal fly ash flood. “If three people walk in that door, then we’ve at least listened to three people,” she added. “It’s important for them to know there’s a listening ear somewhere.”

But even if TVA is able to clean the area quickly, she said, the question will still be, “How clean is clean?” She hopes the disaster spawns changes in environmental policies.

“People shouldn’t have to live in fear of being flooded out on a daily basis,” she says. “Maybe this will be a blessing in disguise to protect other families.”

Chris Copeland says there’s no way he can subject his wife and two daughters, ages 10 and 13, to unknown toxins. Though his parents bought the property 38 years ago and he grew up there, he plans to sell the house. His wife and children have already left.

Nobody can tell me for sure what’s in all this mess, and I’m not going to unnecessarily expose [my family] to anything that’s going to harm them. I just don’t have a real good feeling they’re going to be able to get everything out of there and return it to the way it was before. ~ Chris Copeland, homeowner

“Nobody can tell me for sure what’s in all this mess, and I’m not going to unnecessarily expose them to anything that’s going to harm them,” he says. “I just don’t have a real good feeling they’re going to be able to get everything out of there and return it to the way it was before.”

He barely recognizes what was once a beautiful view. The road leading to his house is covered in 40 to 50 feet of mud. The land is scoured. Even if the area is restored, he has no intention of staying. It’s a hard decision, softened only by the knowledge that no one was injured and his daughters weren’t home at the time. His voice is filled with regret and pain as he talks about his desire to get their lives back to normal.

“They’re upset,” he says. “If I could give them another place to live pretty quick, they’d be happier. They just want someplace to go. It’s real hard to comprehend what’s going to happen and where we’re going to go from here.”

As rainy weather gives way to dryer conditions, a new problem will emerge — gray, powdery ash coating everything in its wake. In an attempt to minimize dust and erosion, TVA announced plans earlier this week to distribute seed and straw via air and boat. A temporary dam was placed downstream to prevent further ash spread in the river. The plant, which supplies electricity to Tennessee, Alabama, Mississippi, Georgia, North Carolina, Kentucky, and Virginia, remains in operation. Fly ash is being redirected to another pond.

On Tuesday, landowners filed a lawsuit against TVA for $165 million. The Southern Alliance for Clean Energy, a non-profit agency, also said it intends to sue.