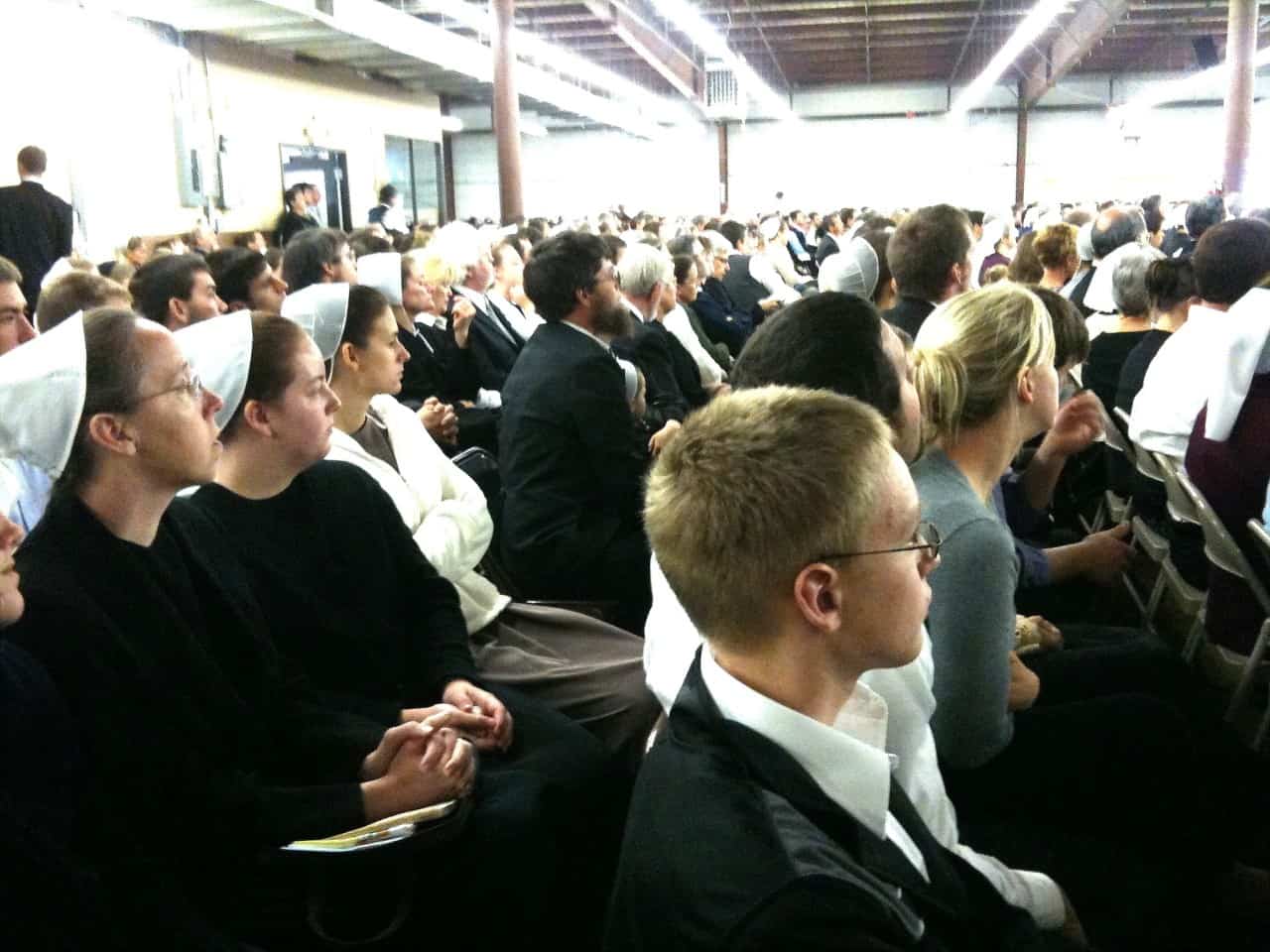 Mennonites attend a funeral service for nine members of their community on March 30, 2010, in Marrowbone, Ky. More than 3,000 people gathered to say goodbye to members of the Esh family, who died in a fiery crash on Interstate 65 in Munfordville, Ky. (Photo by Carmen K. Sisson/Cloudybright)

MARROWBONE, Ky. — Hearts were heavy but cheeks were mostly dry March 30 as more than 3,000 mourners gathered to say goodbye to nine members of a Mennonite community who perished in a fiery crash on Interstate 65 near Munfordville. Friends said John Esh, an associate pastor of Marrowbone Christian Brotherhood, a Beachy Amish Mennonite congregation, would have wanted it that way. Esh, who died in the March 26 crash, dedicated his life to uplifting others, quietly leading by example, jubilantly celebrating in song.

Esh and his wife, Sadie, who also died in the crash, survived the loss of a son four years ago and a devastating house fire in December, yet their message never changed: Keep hope. Keep faith. Keep strong. Keep going.

It is that strength of spirit to which this 18-family community, nestled within the hills of south-central Kentucky, is clinging as the church struggles to accept the loss of nearly a tenth of its members. The crash, which cost 11 lives, was believed to be the deadliest motor vehicle accident in Kentucky since 1988. A tractor-trailer hauling brake drums left the southbound lane of I-65, crossed a 60-foot grass median, plowed through a cable barrier and struck a 15-passenger van head-on before hitting a rock embankment and bursting into flames. Ten of the 12 Mennonites in the van — eight of whom were members of the Esh family and a ninth soon to be an in-law — died on impact.

Leroy and Naomi Esh had two other adopted sons, Josiah and Johnny Esh, who survived the crash and will now be cared for by relatives in Pennsylvania.

Schmucker said he sees the national media attention as a good thing to come out of the tragedy, offering people an opportunity to learn more about conservative Mennonites and opening a dialogue on their faith.

Marrowbone Christian Brotherhood, an outgrowth of a New Order Amish group in Yanceyville, N.C., has only been in existence 10 years and, until this week, had just one grave in its cemetery — that of John and Sadie’s eldest son, Johnny Esh Jr.

But times are changing. Hoping to expand their outreach, the church transitioned to Beachy Amish a few years ago and allowed its members to start driving motorized vehicles. Pastor Leroy Kauffman’s son, Michael, now drives a Chevrolet Suburban and a Dodge work truck, but he said he misses his horse and buggy sometimes, especially on beautiful Sunday afternoons.

Some members use the Internet, and online memorials have sprung up for the Eshes, including a Facebook group and YouTube videos featuring music from the family’s four compact disc releases.

The church remains strong despite its losses, its members committed to helping one another through their shared tragedy.

Three days before the funeral, as the sun slipped behind the hills and a chill wind swept over the pastureland, more than two dozen men from Mennonite communities in Kentucky and Tennessee gathered to dig plots and build “rough boxes” for the coffins. Most had never done such a thing.

From what we knew, this group was ready to meet God and stand at the judgment. ~ Bishop Leroy Kauffman

Instead of focusing on tragedy during the funeral, Bishop Leroy Kauffman challenged mourners, most of whom were Mennonites and Amish, to examine their hearts and ask themselves if they will be ready “when the lights shine through the windshield.”

“From what we knew, this group was ready to meet God and stand at the judgment,” Kauffman said. “We don’t try to make sense of it. This is for all of us. Some of us may not be ready to meet God.”

Sherry Gore, who drove 18 hours from Pinecraft, Fla., to pay her respects, said there was no question about the content of John Esh’s heart.

“He was the nicest man in the world,” Gore said. “I’ve never met anyone more concerned for someone’s soul.”

Tears welled in her eyes as she recalled a time when her daughter was ill. Every Monday, for five months, John Esh called her to check on the girl’s health and the worried mother’s spiritual well-being.

“He would always ask, ‘Are you staying faithful to Christ?’ ” Gore said, staring out across the parking lot of the Marrowbone Christian Brotherhood community building, gazing at the sea of people gathered outside the metal building to watch eight wooden coffins being loaded into hearses. “And I was only one person. How many others did he call?”

Gore was particularly struck by the Eshes’ humility after a fire reduced the family’s home to a bare slab three months ago. As church members raced to erect a new house, John Esh agonized over the details, Gore said. Did he really need oak doors and trim? Painted wood was good enough for him. He didn’t want God to be displeased that he was being overindulgent. Everyone had escaped the fire unharmed, and as long as they were together, what more did they need?

The gaps the Eshes leave behind are palpable. There was Rose, remembered as “quiet, weak in mind, but always smiling,” who Gore said touched lives not so much by her voice but by the beautiful letters of encouragement she crafted and sent to others.

Then there was Anna, who took her brother Johnny’s place as a missionary in Ukraine four years ago after he died in a snowmobiling accident. This month, she was planning a mission trip to Brazil, but even in her excitement, she never forgot her personal mission — ministering to widows. Among her belongings were found numerous to-do lists. On her last list: “Three more widows to visit.”

You can’t survive something like this without God. As tragic as this seems, it will only serve to strengthen the church as a whole. ~ Sherry Gore

Rachel Esh and Joel Gingerich, both in their early 20s, were planning a July wedding. Days before his death, Joel purchased two dozen roses for the girl Gore said was so filled with life and enthusiasm she almost bounced into rooms.

“They were inseparable,” Gore said. “It was so obvious they were in love.”

For Leroy and Naomi Esh, their children were their life. After struggling for years with infertility, they finally decided to adopt. After 16 months fighting through red tape in Guatemala, they finally found a use for the baby clothes Naomi had been sewing in faith that someday their dream of being parents would come true. They adopted three children: Josiah, now 5, and Johnny, now 3, both of whom survived the crash.

Two-month-old Jalen, who’d only been with them for three weeks, died in the accident and was buried at his mother’s feet.

“You can’t survive something like this without God,” Gore said. “As tragic as this seems, it will only serve to strengthen the church as a whole.”

* This story received the 2010 Award of Excellence from the Associated Church Press.