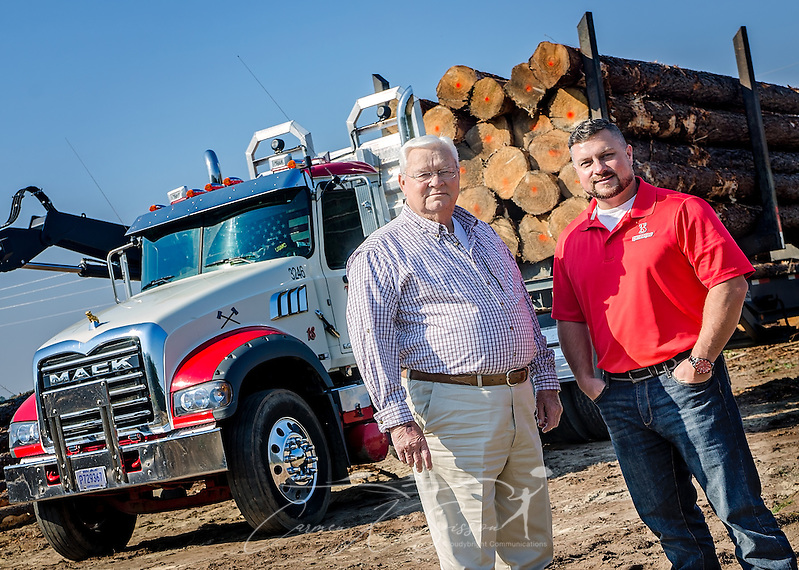 Tracy Gunter Jr. and his son, Tracy Gunter III, stand on a job site with one of the Mack Granites they use in their logging business, Nov. 16, 2016, in Steadham, S.C. The men own and operate Tracy’s Logging and T3 Chipping, where they oversee four logging crews and two chpping crews, averaging 300 loads per week. (Photo by Carmen K. Sisson/Cloudybright)

Every tree has a story, and if that tree is in Steadman, S.C., odds are good that the Gunter family knows its history. Tracy Gunter Jr. and his son, Tracy Gunter III, own and operate Tracy’s Logging and T3 Chipping, continuing a family legacy that began with Tracy Gunter Sr., who worked in a sawmill. The woods are where the Gunters make their living, but it is also where they feel most at home, and they see themselves not only as loggers but also as stewards of the land.

As Tracy Gunter III guided his pickup through the winding, bumpy terrain, he and his father pointed out the fruits of their labor — new growth bathed in dappled sunlight, benefitting from a property they recently thinned. In a clearing, they met up with driver T.J. Branham, talking with him as he strapped down a load of loblolly pine bound for a Georgia-Pacific plant.

The logging industry has changed dramatically over the years since Gunter Sr. pulled logs with a team of oxen. Now, the beasts of burden run on diesel and Gunter Jr. and Gunter III run four logging crews and two chipping crews, averaging 300 loads per week. They operate a fleet of 29 tractors, including 15 Mack® Granite® tractors.

Tracy’s Logging : Mack has a reputation for being tough

Performance is key in their business and they are quick to point out the benefits of the Mack brand.

“Mack has a reputation for being a tough truck, and we’re in a tough business,” Tracy Jr., said. “We’re off-road a lot of the time, and we have to overcome a lot of obstacles. It’s hard on our vehicles, but the Macks are very durable. They stay with you.”

The Gunters worked closely with their dealer, Shealy Truck Center in Columbia, S.C., to find a truck that would meet their needs.

“David Shealy and Shawn Broadway really get involved with their customers,” Tracy Jr. said. “They’re not just sitting in the office. They’re out in the field a lot and are always there to offer a helping hand or word of advice, even letting us use one of their trucks if our truck is down. They have been very supportive for us over the years.”

Broadway arranged for them to demo several trucks with the mDRIVE™ automated manual transmission, and they liked it, especially the fuel economy.

The 13-liter MP®8 445C-hp Maxicruise engine, with 1,860 lb.-ft. is powerful enough to get the job done, they said. The heavy-duty Mack rear end with S38 rear axles is tougher and more durable than other trucks, while the 12-speed mDRIVE™ transmission is lighter and maximizes payload — two issues the Gunters heavily researched before making their choice. Ground clearance was also important, and Mack’s top-mounted axle carrier allows them to work on rutted and bumpy roads without getting caught on debris or stumps.

They expect to haul an additional two to three loads per week with the new Granites, and if all goes as planned, their increased production will quickly pay for their upgraded fleet.

They won’t have to worry about maintenance and repairs thanks to GuardDog Connect and a full-service lease with Shealy.

“They were our first toe in the water for full-service leasing in the timber industry, and now we have several other fleets,” Broadway said. “They have a great reputation, and they take care of their equipment. They have their own shop with good mechanics, but we have helped them separate trucking from their core business, which is producing timber and chips. The timber industry is very weather-driven, so when the weather is good, they have to go.”

In addition to reliability, the Gunters also hope the mDRIVE will solve one of their biggest problems: employee recruitment and retention. The transmission constantly monitors internal and external parameters, automatically choosing the best gear to provide the optimal blend of power and fuel efficiency. The company’s older drivers quickly embraced the new transmission, and younger, less experienced drivers are proving to be easier to train on the mDRIVE.

The company has trouble finding new employees to work in the woods, according to Tracy Jr. “We’re just beginning to train young people who will be willing to work — or at least be willing to go through the training program. We’re using the mDRIVE because it performs better off the road and it makes it easier to get an inexperienced person started. Sometimes the ground is real spongy, but these automatics know what gear to be in. They come out of sandy places great and keep our equipment in service. There are a lot of advantages.”

They like the Granite’s body style, too, especially in their eye-catching, red and white color scheme. Gold Bulldog hood ornaments complement the look, denoting the all-Mack powertrain.

The Granite’s comfortable driver environment is also an enticement for the Gunters’ employees, and as Tracy Jr. noted, a far step beyond typical log trucks from just a few years ago. For his part, Tracy III was also impressed with the fleet management capabilities Mack’s GuardDog® Connect brings to his operations, especially for improving fuel economy.

He attributes their success to the Golden Rule — treating people as they would want to be treated themselves.

“We always do what we say we’re going to do,” he said. “We just trust the Lord. It’s just by the grace of God that we have been successful as long as we have, and I know that’s the reason — we always try to put Him first in our businesses and our lives.”

That faith helped them through many hard times, including damage from a tornado earlier this year and flooding last October.

But no matter what the future brings, the Gunters know one thing — their trees and forests will survive for generations to come.

“We’ve always stressed the importance of the landowners’ property,” Tracy Jr. said. “It’s very important to them, and we try to treat it like we would our own property. We try to be as good as our word, because our word is our bond.”