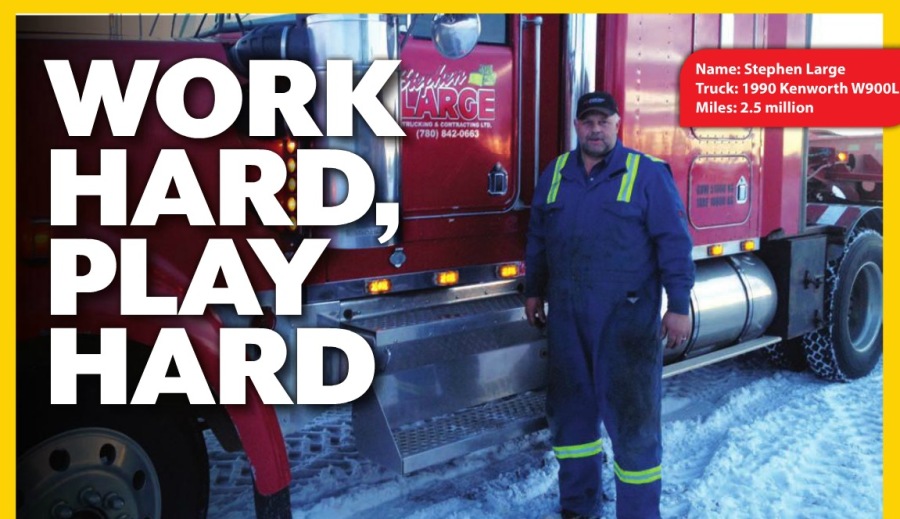 It was well past dark when the man and the boy finally got the cattle unloaded. The road was empty and the man was tired. The boy had been driving farm trucks around the family ranch for several years. The boy was ready, the man figured. He handed over the keys and climbed into the passenger seat to catch some much-needed shuteye.

And so, 13-year-old Stephen Large climbed behind the wheel of the 1975 Kenworth W900A and drove off into the Canadian night, igniting a passion and a career. In September 1983, a few days after his 18th birthday, he got his Class 1 license and he has been behind the wheel ever since.

Large, now 48, lives in Czar, Alberta, not far from where he grew up. In the tiny village of 167 people, where his wife serves as mayor, agriculture remains the primary industry, and big trucks are a crucial part of everyday life. That’s why Large relies on Shell Rotella T Triple Protection motor oil. In the unforgiving climate and rough terrain, it’s the only product Large trusts to keep his vehicles on the road.

Large was only 24 when he bought the love of his life — a 1990 Kenworth W900L, painted candy apple red. He spent months thinking about what he wanted. When he was satisfied that every detail was just right, he placed the order.

… lots of people turn up their noses at this old truck. It doesn’t even have cup holders — they didn’t have that stuff back then. But you can step on the throttle and it will roll you back in your seat. ~ Stephen Large, driver

“It’s a little faded now, because it’s almost 25 years old,” Large says of the truck. “But in my opinion, that’s as good as trucks ever got. The trucks they build now don’t appeal to me whatsoever. I don’t like the look or the feel of them.”

Though Large stopped hauling to the United States full-time in 2001, the Kenworth still sees plenty of use, carrying the Caterpillar machines Large uses daily in his earth-moving and construction business, Stephen Large Trucking & Contracting Ltd., and hauling farm and construction equipment for his customers around Alberta and Saskatchewan.

The Kenworth has found a surprising new use as well — hauling its contemporaries back to the mechanic when they break down on the side of the road. Large estimates a quarter of his short hauls involve rescuing two and three-year-old trucks that can’t handle the cold Canadian weather and can’t be fixed with simple tools. His own truck hasn’t seen consistently warm temperatures since its last visit to the United States, he jokes.

“It makes me giggle a little, because lots of people turn up their noses at this old truck,” Large says. “It doesn’t even have cup holders — they didn’t have that stuff back then. But you can step on the throttle and it will roll you back in your seat.”

He believes so completely in Shell’s reputation that he filled the Kenworth with Shell Rotella T before he even left the dealership. Approximately 220 oil changes later, it’s still going strong.

I’ve never used anything else in that truck or anything else I own. I have four trucks, four Caterpillar machines, two diesel pickups, a diesel Ford Excursion, and my wife has a (2013 Ford Explorer). All use Shell oil. I really, really like their product. ~ Stephen Large, driver

“I’ve never used anything else in that truck or anything else I own,” he says. “I have four trucks, four Caterpillar machines, two diesel pickups, a diesel Ford Excursion, and my wife has a (2013 Ford Explorer). All use Shell oil. I really, really like their product.”

Large also really, really likes driving, so much so that he lists it as his favorite hobby, along with restoring old trucks.

“I’ve never been fishing a day in my life,” he says, laughing. “I’ve never been hunting, don’t play golf, played hockey only as a kid. Three times a year, instead of flying to some little island and sitting there, we’ll drive to California and go to Disneyland or go to Texas.”

He has taken his wife, Angela, and their two children, Ryatt, 10, and Tomi Rae, 7, to see Mount Rushmore and Mississippi riverboats.

The things he has seen and the experiences he has had made driving an ideal career.

“I wanted to see lots of the country,” Large says. “I wanted to be my own boss. I could never have a scheduled job — it would drive me crazy.”