COLUMBUS, Miss. — The first time Joe LaNier II left Columbus, he was 17. There weren’t many options for the young black man deep in the heart of the 1940s South. His mother was dead, his father was out of work, his little sisters were hungry and he had just been fired from his job as a dishwasher because he’d asked for a raise from $3.50 to $5 a week.

Soon, he was on a ship bound for Hawaii — a place he’d never heard of. He didn’t know the world was round. He’d never seen an ocean, couldn’t even swim. He was a sixth grade dropout, about to become a man.

Friday, the boy who became a man came home. He had made a promise to his parents, and he intended to keep it.

This doesn’t look like a cemetery. From Highway 50, the only thing visible is a field of knee-high weeds. 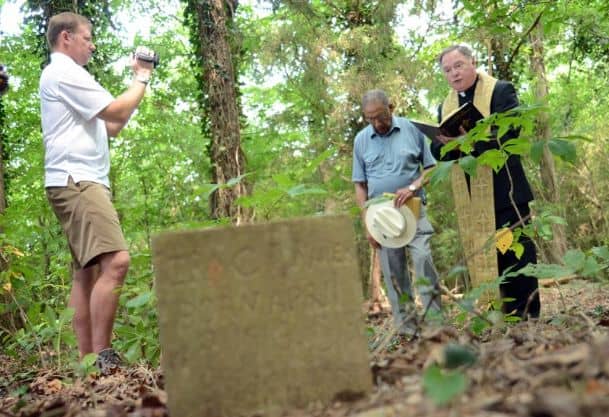 Joe LaNier II and Father Robert Dore pray over the graves of LaNier’s parents in Lowndes County, Mississippi in June 2012. Journalist Steffan Tubbs, chairman of the Greatest Generations Foundation, filmed the two as part of his documentary of LaNier’s life. (Photo by Luisa Porter/The Commercial Dispatch)

LaNier forges his way across the field, toward a thicket of trees. He steps from the car and pushes into the woods. The branches close behind him, preserving the secret of this forgotten place.

Behind him, a small entourage hesitantly follows. Some are relatives. Some are working on a documentary and book about LaNier’s life.

“Watch for barbed-wire,” someone says.

“Watch for ticks,” a voice replies.

LaNier walks past the cross fashioned from two sticks, past the small headstone with the name “Ira LaNier” scratched unevenly into the stone surface.

When he reaches a sloped hill, he removes his hat.

Above, the sun struggles to shine through the dense canopy of trees. Everyone waits, uncertain what to do with their hands when Dore makes the sign of the cross.

The city to which LaNier returned is not the city of his childhood, a fact which still surprises him even though more than half a century has passed since civil rights activist Rosa Parks refused to move to the back of a Montgomery, Ala. bus.

The officer said, ‘I’m from Georgia. Where I come from, there’s only two kinds of niggers — a good nigger and a dead nigger. We don’t want no dead ones.’ ~ Joe LaNier II

When he left for the war, signs prohibited blacks from entering most public places. He and three friends were dragged to a barn, where one was viciously beaten for allegedly stealing from a white shopkeeper.

The military was equally segregated. In the 23rd Special Construction Battalion, the officers were white and the seamen and steward’s mates — basically servants — were black.

“I’m from Georgia,” an officer told them. “Where I come from, there’s only two kinds of niggers — a good nigger and a dead nigger. We don’t want no dead ones.”

LaNier saw the beginnings of change on his way home from the war. On a three-hour layover in Denver, he walked to the drugstore to get an ice cream cone.

He hesitated on the threshold. The young woman behind the counter, sensing his fear, motioned him inside.

I want to live here forever, he thought to himself.

He finished high school in Holly Springs, then went to Xavier University in New Orleans and earned a pharmacy degree. Then he moved to Denver, where he became the first black director of pharmacy at National Jewish Health hospital.

Now retired, he spends a lot of time speaking at schools. The world is a different place now, he tells students. He doesn’t gloss over the truth, but he also doesn’t bash the power structure of the South in which he grew up.

“If you can keep your mind from being consumed with hate, if you don’t quit when the going gets tough, if you take advantage of opportunities, you can be anything,” he says.

Off and on through the years, LaNier has returned to Columbus to visit family and try to find his parents’ graves. He had promised he would buy proper headstones for them. Every trip, he left with the realization that he was getting older; if he didn’t find their graves soon, he might end up breaking his promise.

Then he met Steffan Tubbs, chairman of the Greatest Generations Foundation, a Denver-based nonprofit organization dedicated to preserving veterans’ stories and legacies.  Tubbs, a former ABC News correspondent and now co-host of a radio news show in Denver, became fascinated with LaNier’s story. Together, they began working on a book and documentary about LaNier’s life.

Joe tripped a lot, but he never went down. If that’s not a metaphor for Joe’s life, I don’t know what is. ~ Author Steffan Tubbs

The two have become close during the process. Last fall, after stumbling around in the woods for hours, they found his parents’ graves. LaNier had given up when he looked down and saw them buried beneath a tangle of overgrowth.

“We kept trekking through,” Tubbs says. “Joe tripped a lot, but he never went down. If that’s not a metaphor for Joe’s life, I don’t know what is.”

In March, the duo went to Iwo Jima, where his unit had served before going to Okinawa. They scooped black volcanic beach sand into a vial and flew back to Denver.

LaNier’s mother, Savilla Barnett LaNier, died in 1940, and his father, Joseph Conklin Lanier, died in 1966. Their grave markers were simple, and he vowed someday to return and give them the proper funeral ceremony and headstones they deserved. But time and nature took its toll.

He credits Tubbs with helping find the graves when he thought all hope was lost.

“When you consider what this place is,” Tubbs says, waving his hand toward the encroaching trees, “They were forgotten. This was God’s will. It was just divine intervention. To be here today is the culmination.”

They were forgotten. This was God’s will. It was just divine intervention. To be here today is the culmination. ~ Joe LaNier II

Carefully, the men from Columbus Marble Works position three headstones into the soft soil — one for LaNier’s mother, Savilla Barnett LaNier, one for his father, Joseph Conklin LaNier, and one for a brother, Ira Carinza LaNier.

LaNier clutches his hat and stares at the new, glossy headstones, donated by a company he had never heard of, through a man — Columbus Marble Works Manager Key Blair — whom he’d never met. Now faced with the end of his journey and the completion of the circle, he struggles to find words.

“Thank you for being my parents,” he finally says over the graves.

Tears slip down the cheeks of a woman standing at the periphery.  LaNier doesn’t cry until he opens the vial of sand from Iwo Jima and sprinkles it among the leaves, over the final resting place of the parents he loved.

He turns to walk up the hill, to leave this place. Then he stops. His shoulders begin to shake and he grips a tree as he finally, finally breaks down.

A promise made. A promise kept. It’s time to go home.