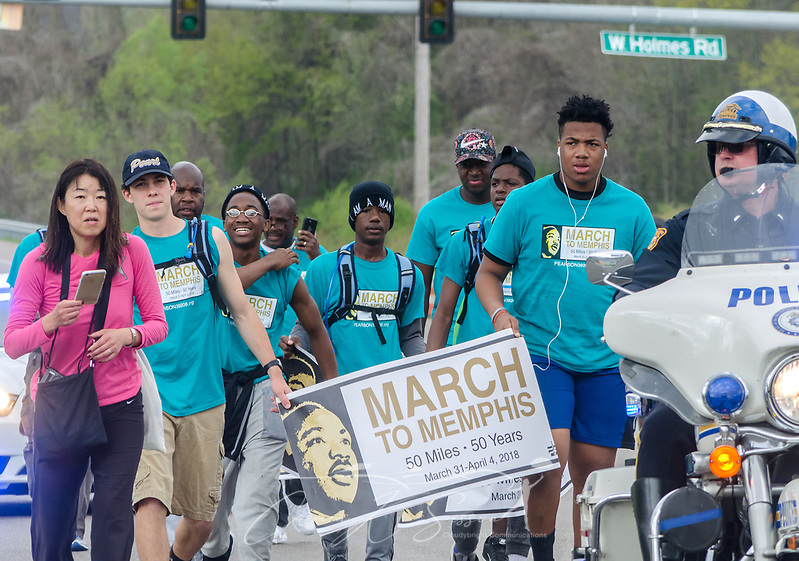 A group of young people, flanked by media and law enforcement, march down Highway 61, April 3, 2018, in Memphis, Tenn. Six marchers, ranging in age from 14-19, endured a 50-mile, three-day trek from Mississippi to honor the legacy of Dr. Martin Luther King Jr., who was assassinated 50 years ago today in Memphis. (Photo by Carmen K. Sisson/Cloudybright)

MEMPHIS, Tenn. — Spirits were high, even as tired ankles protested the last of 50 punishing miles that began Sunday in Dundee, Miss. and ended Tuesday in Memphis. Six youths, ranging in age from 14 to 19, walked along Mississippi Highway 61, some chattering and waving to passersby and others with heads bowed, lost in the music pumping through white ear buds or fighting an internal battle with fatigue.

A few weeks ago, they were strangers. Now, they are friends, bonded by the camaraderie of a shared goal: marching to honor the legacy of Dr. Martin Luther King Jr., who was assassinated 50 years ago Wednesday in Memphis.

Thousands gathered in the city this week to honor the legendary civil rights leader, but it was the young people from Pearl, Miss., – a small town 10 minutes south of Jackson – who captured the hearts and imaginations of local residents and international media outlets.

Davonta Pate, 14, decided to march after local community activist Jarvis Ward came to his house and issued a personal invitation.

Davonta never knew his father, and Mr. Ward made a profound impact on the young man when they met last year during a summer reading program.

The idea of spending three days with complete strangers terrified the shy, soft-spoken teen. He was struggling with apathy and attitude problems. He wasn’t sure the group would accept him. Maybe they would be mean. Maybe they would think he was worthless. But Ward and Davonta’s mother thought the march was a good opportunity, so he agreed to try.

He had only gone a few miles when his knee began popping and his ankle throbbed. The day was hot and he quickly became dehydrated, eschewing admonitions to use the hydration backpacks they were given. He nearly fainted, but his new friends, fellow marchers Damonte Steele and Benjamin Rutledge, locked arms around him and kept him on his feet. 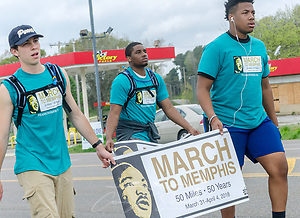 A group of young people march down Highway 61, April 3, 2018, in Memphis, Tenn. Six marchers, ranging in age from 14-19, endured a 50-mile, three-day trek from Mississippi to honor the legacy of Dr. Martin Luther King Jr., who was assasinated 50 years ago today in Memphis. (Photo by Carmen K. Sisson/Cloudybright)

At the end of the day, the group convened and he admitted he wanted to give up.

They had discussed Proverbs 27:17 – “Iron sharpeneth iron; so a man sharpeneth the countenance of his friend.”

And that’s exactly what happened. Davonta’s new friends encouraged him to continue. He could lean on them, physically and emotionally. And so he did. Every evening, as they rested in their hotel rooms, he thought about quitting. But every morning, he was flooded with a renewed sense of purpose.

By the time they entered Memphis, five of the six young men were sporting ankle and knee supports, but Davonta’s pain was gone. Vanished, along with his fears.

“I’m becoming a man, but I still act like a child,” he says. “Somewhere in my little heart, I get stage fright. I get scared. Everybody told me to overcome my fears and speak with confidence.”

He found new inspiration in the life and words of Dr. King, whom he admits he knew little about before the march. And he has found new strength of character in facing a challenge and seeing it through to the end.

The turquoise-clad marchers received plenty of support along the way, too, from honking truck drivers to local residents who flocked to low-slung porches and gravel driveways to offer encouragement as they passed. With every kind word, their spirits were replenished.

Memphis resident William Williamson was among those who offered encouragement along the route.

Mr. Williamson works at a roadside fruit stand along Highway 61 on the outskirts of downtown Memphis. As the marchers struggled up a steep hill, he recalled the night of King’s death.

Mr. Williamson was 21 at the time, working at a hosiery store downtown. He and his friends attended several of the civil rights events supporting the Memphis sanitation strike, which brought King to the city. His dark eyes gleam as he recalls King’s dynamic personality and the speeches that shape his legacy today.

“Living in Memphis in 1968 was rough,” he says. “But when that man talked, people listened. He said a man ain’t a man if he doesn’t have something in his life he would die for. This man was real. From the heart.”

Williamson had just gotten off work and was preparing supper, watching television, when the newscaster’s voice said words that made his blood run cold: Dr. Martin Luther King Jr., the man he admired so much, was dead.

The Memphis streets that night were dark. The National Guard swept across the city quickly, enforcing a dusk to dawn curfew in an attempt to quell skirmishes that spread throughout the city and across the nation. 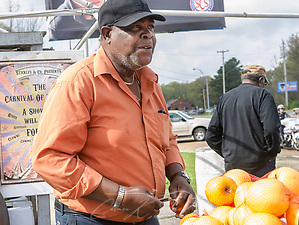 William Williamson watches as a group of teenaged marchers pass his fruit stand, April 3, 2018, in Memphis, Tenn. Williamson, who was 21 at the time of Dr. King’s assassination, gave the group a bag of oranges as a token of his respect for their march. (Photo by Carmen K. Sisson/Cloudybright)

Williamson’s voice falters as he remembers the night a bright light was extinguished forever. He keeps Martin Luther King’s most famous speeches on tape and listens to them often. He visits the Lorraine Motel from time to time, standing on the balcony where King died.

The room King stayed in, Room 306, has been preserved practically untouched, including his unmade bed. A can of hair ointment sits on the vanity, and a Gideon Bible rests on the nightstand. Though the blood-stained balcony has been replaced, a 13-inch square of the concrete has been preserved.

Even now, Williamson is unsettled when he visits.

“Every time I go there, my mind flashes back,” he says. “That man was something.”

Like many, he believes the work of the civil rights movement is not finished. He thinks it will take another man like King to carry the movement forward, but he doesn’t expect it to happen in his lifetime. Still, he is encouraged by young people like the marchers from Pearl.

As they passed his table, laden high with watermelons, okra, and assorted fruits and vegetables, he rushed forward, hefting a bag of oranges. Without ceremony, he thrust it into one of the students’ hands and headed back to the fruit stand.

“I respect them,” he said. “I wanted them to know I respect what they’re doing.”