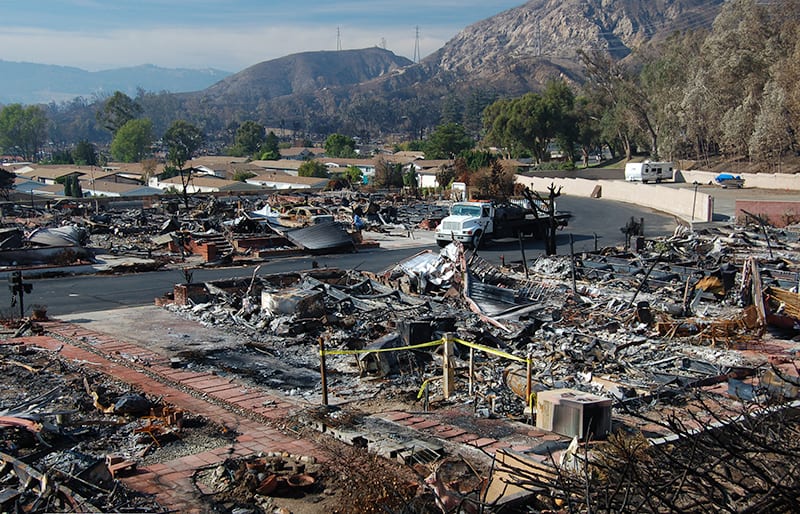 he remains of a mobile home park in Sylmar, California. 480 of the park’s 600 mobile homes were burned in the Sayre Fire in November 2008. The homes in the background that did not sustain fire damage become uninhabitable due to the lack of utilities. (Photo by Michael Mancino/FEMA)

SYLMAR, Calif. — One by one, the names were called, amid a backdrop of noise and confusion Monday afternoon in the Sylmar High School gymnasium, where survivors sought shelter following four weekend wildfires, which blackened more than 42,000 acres in southwestern California. It was a seemingly endless roster, tinged with both hope and despair as families waited to learn which van would take them on a 10-minute tour of Oakridge Mobile Home Park in Los Angeles County — the white vans, for residents whose homes were left standing; or the black vans, for those who had lost everything. The black vans stayed busy.

Firefighters were only able to save 124 of the 600 homes in the quaint village many described as an idyllic community, where the sounds of laughter filled the evening air as neighbors chatted on their front porches and couples enjoyed evening strolls amidst the lush beauty of the Angeles National Forest.

Little remained of the devastated development Friday as the Los Angles City Fire Department finally put out the blaze which became known as the Sayre fire. Two wildfires, affecting Santa Barbara and San Luis Obispo counties, have now been extinguished, and the fourth fire, in Orange County, is 90 percent contained.

Members of faith-based disaster response teams throughout the area spent most of Monday in meetings and conference calls as volunteers tried to get a grip on the magnitude of the devastation.

We’re staying in contact with the executive presbyters and pastors. We’re just waiting for someone to say, ‘We need help; please send someone.’ ~ John Hill, Presybterian Disaster Response

The fires were indiscriminate in their destruction, reducing both multi-million dollar celebrity mansions and humble trailers in their wake, said Gloria Cooper project manager for Church of the Brethren’s Children’s Disaster Services. While the more affluent residents found refuge in hotels and with friends, the rest scattered among three shelters opened by the American Red Cross at Brea Community Center, San Marcos High School, and Sylmar High School. Most schools were outside the affected areas, alleviating the need for all but minimal childcare by COB.

The most pressing aid, beyond shelter, was providing food for survivors — a need met by the Red Cross, Salvation Army Emergency Disaster Response teams, the Lutheran Church of the Foothills in Sylmar, and California Southern Baptist Disaster Relief, which arrived Sunday and are serving 900 noontime meals per day from mobile units set up in the back parking lot of First Presbyterian Church of Granada Hills.

Associate director Jack Ericson said that’s a relatively small number of meals for his group, which often feeds as many as 4,000 people each day following disasters. He said spirits are “way up high” among his group, and he expects the 18 volunteers on hand to leave Friday.

Meanwhile, Presbyterian Disaster Response set up on the edge of the Santa Barbara fire line at El Montecito Presbyterian Church, offering food and respite for firefighters as well as the community at large.

PDR volunteer John Hill, who lives nearby and was evacuated, said it may take up to a week to determine what further assistance will be needed, but they are relieved none of their churches appear to have been affected.

“We’re staying in contact with the executive presbyters and pastors,” he said Tuesday afternoon. “We’re just waiting for someone to say, ‘We need help; please send someone.’” Tom Hazelwood, director of the United Methodist Committee on Relief said UMCOR is also waiting to determine how they will help, but they expect their focus to be on lower income residents and secondary victims such as migrant workers.

Episcopalians in Montecito were not so fortunate as they mourned the partial loss of Westmont College and millions of dollars of damage at the Episcopal Order of the Holy Cross, a historic monastery featuring intricate Spanish architecture and which was inhabited by six monks and 25 guests at the time of the fire. St. Mary’s Retreat House has opened its doors to those evacuees.