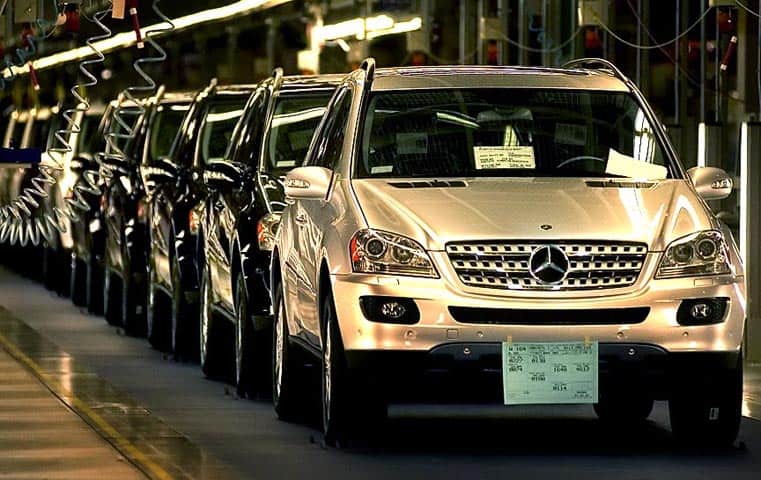 A row of Mercedes M-Class vehicles are lined up in a production room at Mercedes-Benz U.S. International May 3, 2005 at the plant in Vance, Ala. The company unveiled its new $600 expansion during a press conference Tuesday afternoon. (Photo by Carmen K. Sisson/Cloudybright)

It’s a convenient American stereotype: Detroit makes cars, Dixie races them. But as the entire tortured debate in Washington over whether to bail out the ailing U.S. auto industry has shown, that distinction is as tired and broken as the Big Three’s business models. In fact, the political game of chicken that ended Friday with President Bush announcing a temporary $17 billion aid package for GM and Chrysler to stave off the immediate threat of bankruptcy has shown the rest of the country what the South has known for years: led by foreign carmakers like Toyota and Mercedes-Benz, Dixie is now Detroit’s rival in auto production.

And the foreign automakers based in the South, who account for almost a third of all cars built in the U.S., have now become the benchmark against which the Big Three are measured. As the various aid packages were being negotiated, first on Capitol Hill and then this week on the other side of Pennsylvania Avenue, one constant condition Republicans insisted upon was Detroit getting its wages and benefits down to the levels of the so-called transplant workers in states like Alabama, Tennessee, Georgia and Mississippi.

It was the clearest sign yet that the auto production boom has given the South not just a much-needed industrial boost but new political leverage as well.

When Southern politicians like Alabama Senator Richard Shelby blocked a $15 billion congressional bailout for Chrysler and GM, they gave their constituents something just as valuable as pork: some regional self-esteem, if not outright revenge. The Big Three automakers, Shelby insisted last week, “have basically failed” because of their bloated, rigid and outdated manufacturing methods, while the South’s lower costs and more flexible management schemes are the new exemplar.

“Shelby is defending the industry model of his state,” says Merle Black of Emory University in Atlanta, a southern politics expert. “A lot of southerners feel they’ve been talked down to for a long time by northern industry, so he doesn’t lose any votes by doing this.” Jason Ray, who has worked for both Mercedes and Chrysler in Hunstville, Ala., says the Big Three “have engineered a doomsday scenario where if they aren’t allowed to continue being irresponsible with money, including the billions from taxpayers, the U.S. economy will crash. American automakers need to learn to grow with the times or become obsolete.”

More than a few northerners feel the South — supposedly the last bastion of red, patriotic values — is being hypocritical by bending over backward for Germans and Japanese at the expense of U.S. companies. To make the point, a retired GM engineer this month set up a website called boycottalabamanow.com. But southerners ask who the hypocrites really are. “When the textile industry went down in the South and we were accused of being behind the times, we didn’t ask for a bailout — we just had to reinvent ourselves,” says John Jeter, a South Carolina author whose family owns a small chain of auto parts stores and whose new novel, The Plunder Room, examines the modern southern character. “So southerners feel it takes some audacity for northern businessmen who make millions to come holding out beggar’s bowls for billions.”

Not that southern sages like Black approve of an industrial civil war. “We’re all in this recession together,” says Black, who like many others is quick to note that Detroit’s collapse isn’t exactly good for the South, especially given the large number of auto parts production jobs that rely in part on the Big Three.

Still, most southerners champion their region’s low-tax, non-union style of economic development, which they credit for luring overseas car companies like BMW and Kia to build major plants from Kentucky to South Carolina to Texas. More important, after spending the 20th century as America’s industrial backwater — and after watching the conservative Reagan revolution they once led fade away in last month’s presidential election — they hail the idea that the South is rising again in the 21st century. “The sense of confidence is palpable,” says Jim Cashman, a management professor at the University of Alabama and a Chicago native who has worked in the auto industry. “Companies like Mercedes have legitimized the efforts of the New South.”

But before Dixie gets too smug, it should acknowledge a debt it owes Detroit, or rather Detroit’s labor union, the United Autoworkers (UAW). The UAW has made the Big Three’s labor force one of the world’s best paid and protected — clout that is now a focus of what’s wrong with Detroit. Still, the foreign automakers are in America in large part because, as their more fuel-efficient cars became popular in the U.S. in the 1980s and ’90s, the UAW lobbied to get them to build production plants here.

True, those Asian and European firms flocked to the South to avoid Detroit’s high-cost culture. But while southern auto employees extol the union-free, right-to-work rules of their states, the truth is that they might still be earning the basement-level wages of a Mississippi textile worker today if the UAW hadn’t leaned on the likes of Mercedes in Washington. “Mercedes wanted a much lower pay scale when it arrived here,” says Cashman, who notes that veteran southern autoworkers now earn “only fractionally less” than the average $27 an hour for Detroit workers (and often end up with more, thanks to the foreign car companies’ bonus systems). “If not for the UAW pressure, the starting pay would have been more in line with the going wage rate of this region instead of this industry.”

At the same time, southern workers have taught the UAW an important lesson about helping to keep that industry viable. The foreign companies enjoy not only the South’s lower legacy costs but a more flexible production culture. Unlike the Big Three, the southern car plants are far more agile when it comes to accommodating shifting market demand; and that’s due largely to employees’ willingness to exact fewer of the production rules UAW contracts are notorious for.

Part of that efficiency is what Edward Miller, a Honda spokesman in Alabama, calls a modern “harmonious flow” — having nearby vendors supply parts, and workers assemble them, as they’re needed rather than stockpiling too much inventory or flooding the market with, say, gas-guzzlers no one wants to buy anymore. “Southern communities understand you can’t tie organizations down with restrictions,” says manufacturing management expert David Miller of the Alabama Productivity Center. “Successful auto companies in the South provide all the positives you’d find in a union shop.”

Perhaps. But labor advocates still fear for U.S. workers if the South’s automotive industry supplants Detroit as the template. And it’s not as if all is as shiny as a new Lexus in Dixie right now. The Mercedes plant in Vance recently had to cut back to a four-day workweek; and with even Japanese powerhouse Toyota facing U.S. sales slumps, the company this week said it’s delaying the startup of a new plant in Mississippi that will make its Prius hybrid car. Even workers like Ray now feel that a union “would definitely benefit” Dixie autoworkers; and either way, says Cashman, the New South’s economies “still have many, many miles of training and education to go.”

Still, you don’t hear any of the Big Three these days even thinking of opening a $1.2 billion, 2,000-employee facility in Georgia, as South Korea’s Kia is set to do next year. It’s enough to make a NASCAR driver take a victory lap.