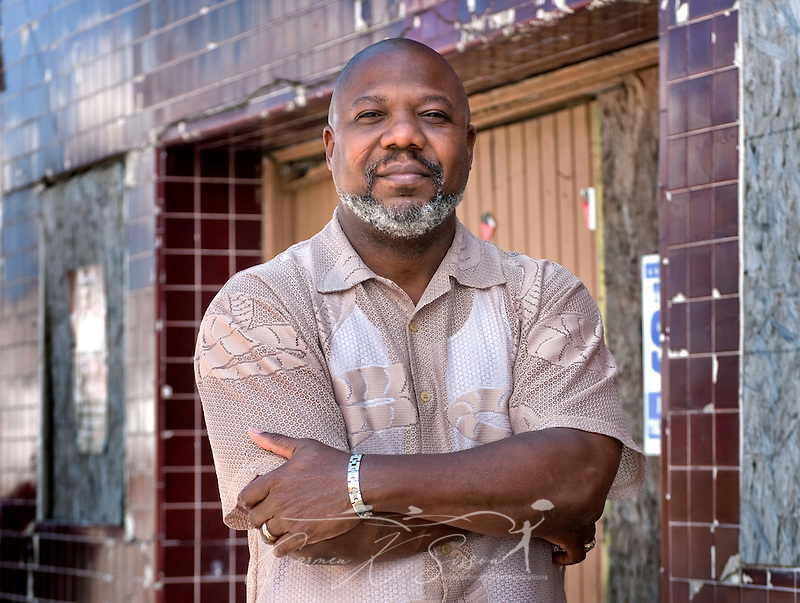 Hilton Kelley stands in front of an abandoned building in downtown Port Arthur, Texas on March 20, 2011. Kelley received a $150,000 Goldman Environmental Prize for his efforts to fight pollution and restore economic vitality in his community. (Photo by Carmen K. Sisson/Cloudybright)

PORT ARTHUR, Texas — Three girls watch as the tall, well-dressed man strides down the cracked sidewalk, across the playground, through the weeds, past the swings, and toward a merry-go-round that might have once been blue but is now a tired gray.

They seem wary here in the shadows of the housing projects and petrochemical plants that make up their world. Life on the west side of Port Arthur, Texas, is hard; street smarts come early by necessity. 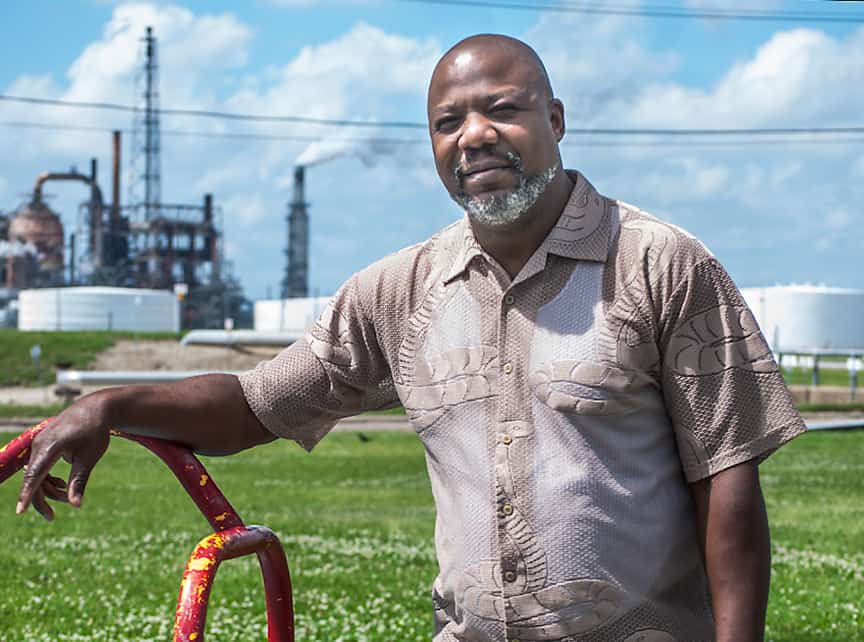 Hilton Kelley grew up in the same squat brick building where they live; breathed the same fetid air; dodged the same haze of pollution, crime, and poverty. As a teenager, he settled scores with his fists. Now he fights with words and a five-gallon bucket used for testing the air, making sure Port Arthur’s chemical plants and oil refineries – some 70 in all – follow the law.

Mr. Kelley has won a lot of victories in his 11 years as an environmental activist. In 2000, he formed the Community In-Power and Development Association (CIDA) to collect data on pollution levels. He stormed corporate shareholder meetings and distributed photographs of Port Arthur children wearing respirators.

Armed with air samples and statistics, he took on the Motiva refinery – separated from the girls’ playground by only a chain-link fence – and secured a $3.5 million settlement for the community.

When Motiva decided to increase production from 285,000 barrels of oil a day to 625,000 barrels, making it the largest refinery in the United States, he pushed for flame and sulfur recovery units to cut down on dangerous emissions.

From Hollywood actor to environmental activist

Last year, the Environmental Protection Agency named Port Arthur a “showcase community,” awarding $100,000 to help the city meet its environmental and health challenges. This month, Kelley will accept a $150,000 Goldman Environmental Prize for his efforts.

But though plenty of people are aware of what Kelley does, fewer understand why. He had a burgeoning career as a stuntman and actor in Oakland, Calif. He was inducted into the Screenwriters Guild in 1991 and worked with actor Don Johnson. Then, he walked away from it all.

My California friends said, ‘You’re crazy to leave here and go back to that little town.’ I got back and people said, ‘Man, what you come back for? Ain’t nothin’ here.’ ~ Environmental activist Hilton Kelley

In February 2000, he returned to Port Arthur for Mardi Gras and stumbled into a nightmare. The once-bustling streets were pocked with holes. The heavens glowed eerily orange at night as flares from refineries shot into the sky, raining noxious, toxic particulates. The air reeked of chemicals.

He walked the streets, noting what he thought was needed: jobs, a diverse economic base, and a social infrastructure.

Over the next three months, he took the bus from California to Texas 18 times. As he rode, he honed his plan.

“My California friends said, ‘You’re crazy to leave here and go back to that little town,'” he recalls, his voice booming against the walls of the soul food restaurant he’s renovating downtown. “I got back and people said, ‘Man, what you come back for? Ain’t nothin’ here.'”

But there was something – pollution. Lots of it. More than three-quarters of the residents had respiratory ailments. Cancer rates were 20 percent higher than the state average. Nearly every day, toxic chemicals like benzene, sulfur dioxide, and hydrogen sulfide were dumped into the air in unplanned “emission events.”

He’s had to walk a very fine line taking these kinds of positions in these communities, because [petrochemicals are] the economic base. He’s really part of a renaissance. ~ Environmental Justice Director Leslie Fields, The Sierra Club

Instead of encouraging people to stay, he wondered, maybe he should be telling them to leave. He decided to educate himself on environmental issues. He met environmental activists in other states. He learned how to measure pollution levels and test the air for hazardous chemicals.

Slowly, the situation changed. Today, he’s on good terms with most of the petrochemical plant officials and is welcome to tour their facilities. A dialogue has begun.

“I wouldn’t say we’re holding hands and singing ‘Kumbaya’ just yet, but we have better communication,” he says.

Walking the line as an environmental watchdog

Leslie Fields, environmental justice director for the Sierra Club in Washington, D.C., spent eight years in Texas and nominated Kelley for the Goldman prize. She says what impresses her most is his ability to gain allies on a sensitive subject.

“He’s had to walk a very fine line taking these kinds of positions in these communities, because [petrochemicals are] the economic base,” Mrs. Fields says. “He’s really part of a renaissance.”

Without air, we die. Water you can’t drink is like not having water at all. With contaminated land, you can’t grow food. Fighting for our natural resources to be uncontaminated is one of the most important fights there is. ~ Environmental activist Hilton Kelley

Kelley has earned a few enemies along the way. He shrugs it off and keeps talking, keeps testing, keeps moving. He works to draw nonprofits and businesses downtown. No matter what he’s doing, he keeps a close eye on his industrial neighbors.

“Someone has to be at the gate to protect the … treasures that support and sustain our lives,” he says. “Without air, we die. Water you can’t drink is like not having water at all. With contaminated land, you can’t grow food. Fighting for our natural resources to be uncontaminated is one of the most important fights there is.”

Every day is a new battle, but California no longer calls to him. At night, he opens his windows, listens to the crickets, and breathes easy, happy in his decision to write a new script for Port Arthur’s future.