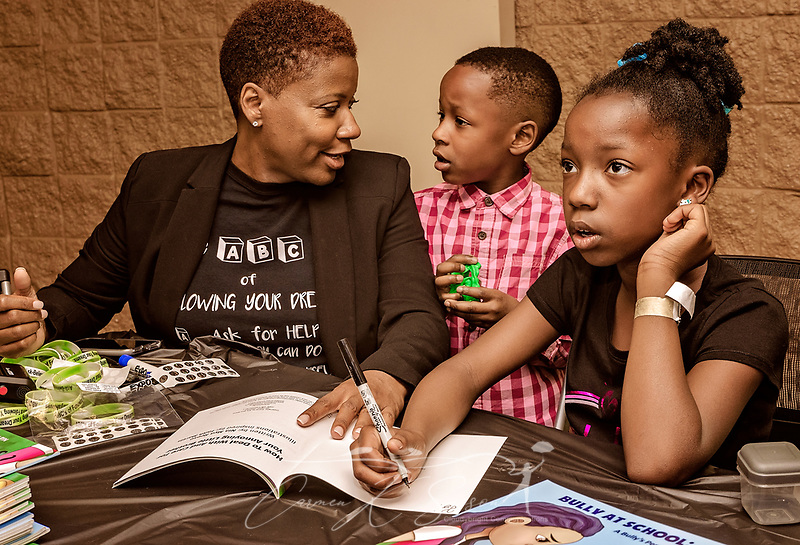 Young author Nia Mya Reese, right, signs copies of her book, “How to Deal with and Care for Your Annoying Little Brother,” April 21, 2018, at Homewood Public Library in Birmingham, Ala. Her mother, Cherinita Ladd-Reese, left, helped her find a publisher for the book. Her brother, Ronald Michael Reese, center, served as the inspiration. Nia Mya, now 9 years old, was 7 when the book was published. (Photo by Carmen K. Sisson/Cloudybright)

HOOVER, Ala. — Ronald Reese slips quietly into the library, unnoticed by the kindergartners scattered around the floor. His eyes scan their upturned faces, searching for his daughter. He grins broadly — there’s Nia Mya at the center of it all, wearing a pink unicorn shirt and twisting her feet nervously around the rungs of a purple stool as she speaks, occasionally looking to her mother for encouragement. Mr. Reese takes out his smartphone and begins recording his nine-year-old, the bestselling author.

Nia Mya’s route to literary fame was a straight trajectory from first grade to Amazon, helped along the way by an observant mother, a supportive father, and one pesky sibling.

Today, Nia Mya Reese is speaking at Bluff Park Elementary School in Hoover, an idyllic, affluent suburb of Birmingham, Ala. The five-year-olds are quiet, a few shyly sucking their thumbs. But the older students are in awe as Nia Mya explains how a class assignment — describe something you are an expert at doing — led to her first book, “How to Deal with and Care for Your Annoying Little Brother.” 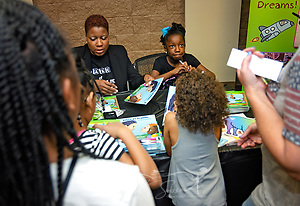 Young author Nia Mya Reese, right, signs copies of her book, “How to Deal with and Care for Your Annoying Little Brother,” April 21, 2018, at Homewood Public Library in Birmingham, Ala. Her mother, Cherinita Ladd-Reese, left, helped her find a publisher for the book and assists with public speaking engagements. Nia Mya, now 9 years old, was 7 when the book was published. (Photo by Carmen K. Sisson/Cloudybright)

Cherinita Ladd-Reese had plucked the manuscript from an assortment of spelling tests and history homework, surprised to discover her daughter’s charming take on how to navigate siblinghood. She encouraged Nia Mya to polish the text. As summer drifted toward fall, Nia Mya’s draft began to look less like schoolwork and more like a real book.

Ms. Ladd-Reese thought it would be fun to self-publish it, but a call to Oklahoma-based Yorkshire Publishing gave her surprising news — they wanted to publish and market the book themselves. The slender, 32-page paperback climbed to the top of Amazon’s bestsellers faster than Nia Mya could lick the pink-and-teal icing off her eighth birthday cake.

Last year, Yorkshire published Nia Mya’s book on bullies, Bully at School: A Bully’s Perspective, and she is working on a third, The Sore Loser (Don’t Be One), which will be published December 2018 along with The Sore Loser coloring book. The business-minded tween is always looking ahead. Nia Mya recently became a representative for Justice, a girls’ clothing company. She can often be seen sporting shirts with messages such as “Never stop dreaming big” and “I am a girl. That’s my superpower.” She wants to design a line of clothing and is sketching ideas.

“I think I was playing hopscotch at her age, and that was about as far as my vision went,” Cherinita says. “I told her I need a personal assistant just to keep up with her and help carry out the plans in her head.”

Cherinita works as an executive director at Faith Chapel in Birmingham, while Ronald is a real estate agent. They both help their daughter juggle opportunity with everyday third-grade life.

Harry Connick, Jr. featured the family on his talk show, giving Nia Mya and her brother, Ronald Michael, their first taste of New York. (The lights impressed her, she says, but the city smells like garbage.) CBS News interviewed her. Teachers asked her to speak to their classes. 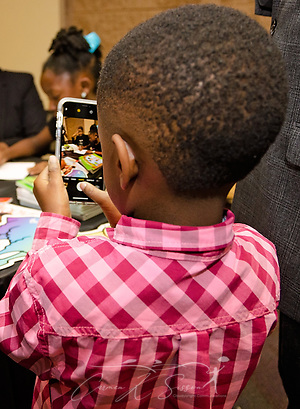 Ronald Michael Reese takes a photo of his sister, Nia Mya Reese, as she signs copies of her book, “How to Deal with and Care for Your Annoying Little Brother,” April 21, 2018, at Homewood Public Library in Birmingham, Ala. Ronald Michael served as the inspiration for the book. (Photo by Carmen K. Sisson/Cloudybright)

Cherinita tries to limit Nia Mya to no more than two events per month. Thursday nights are dedicated family time, and Sundays are reserved for church. “A lot of the principles people see in Nia Mya are not just words,” Cherinita says. “It’s thrilling when you see the lessons you’ve tried to instill coming out. I tell her that whenever God favors you or spotlights you, it’s never just for you, it’s so you can give something to others.”

Today, at Bluff Park, Nia Mya’s wireless mic refuses to stay looped over her ear. Finally, she gives up, holding it in front of her like a dandelion upon which she is about to make a wish.

“How annoying is your little brother on a scale of one to 10?” asks a student.

“Ten,” Nia Mya says, grinning. “He gets on my last nerve sometimes, but he’s very sweet and playful.”

At the end of the presentation, Bluff Park second-grader Elodie Graham has a special request. She and three friends want Nia Mya to read a book they wrote, in which they come face to face with a bear. Nia Mya skims the story, smiles, and gives it back to the young author.

As the students leave, Nia Mya gives her father a high five and flops dramatically onto a bean bag chair. “Phew!” she says, before jumping up and disappearing between the bookshelves, looking for something new to read. An irrepressible dreamer, Nia Mya is unfazed by the fruits of those dreams, even as they continue to manifest. She plans to write until she doesn’t want to write anymore, and then she wants to be a teacher.

“She’s a normal nine-year-old,” Ronald says. “She and her brother still disagree. She still wants to stay up late. But every child has something in them: Our job as parents is to notice it, cultivate it, and encourage it. Move out of the way and support it.”