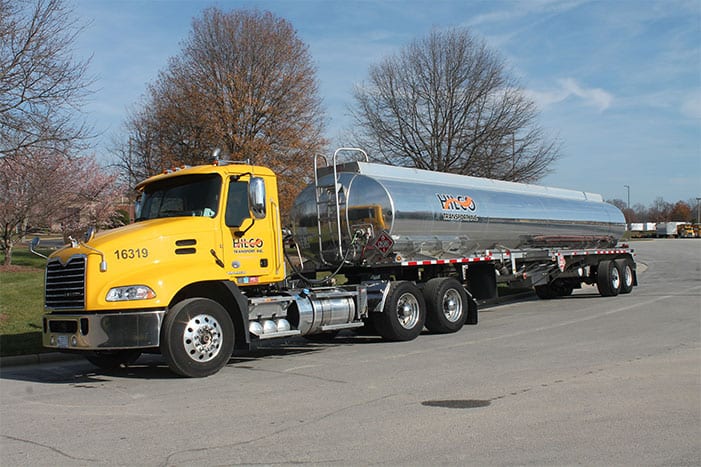 GREENSBORO, N.C. — Jeff Loudermilk can tell you anything you want to know about Hilco Transport, but he laughs when you ask about uptime. He stopped tracking it years ago, because he didn’t have enough issues to report. His 381-truck fleet — 279 of which are Mack Pinnacles and Granites® — keeps rolling, season after season, regardless of climate or application. Downtime is a distant memory.

Hilco, which is based in Greensboro, North Carolina, specializes in the transport of waste, aggregate, liquid asphalt, propane and petroleum and dump trucks. Splitting the company into five divisions creates economic diversity, says Loudermilk, vice president of maintenance. By focusing on seasonal need, Hilco ensures year-round work for approximately 300 company drivers and owner-operators.

The steady stream of projects helped them weather the recession of 2008. As other companies folded, Hilco grew, doubling in size and market area. They now serve most states in the southeastern United States, from New York to Florida to the banks of the Mississippi River.

Mack’s performance across applications is a strong asset, Loudermilk says. If his drivers are hauling petroleum, every six pounds they can save in weight equals one additional gallon they can carry. When they are transporting waste to landfills, it’s all about having the power they need to get the job done.

“Those are two completely different vehicles, but most of the consumable parts are interchangeable,” Loudermilk says. “It’s such a versatile vehicle — if I have a door handle, window part, or switch on the dash that I stock in my parts room, I don’t have to keep separate stock for the dump trucks and the day cabs. The same switch, door handle, or oil filter — any consumable part — will fit all the trucks. Everything is kind of ­universal, so instead of having to have five different starters or five different fan belts in my parts room, I can stock one.”

Though the construction industry was slow to bounce back after the recession, the pace has quickened considerably. Road projects and demolitions are strong, and Hilco — which has 75 dump trucks — now hires an additional up to 50 dump trucks as needed to handle the increased workload.

GuardDog Connect keeps things running smoothly, alerting drivers to potential problems and routing them to the nearest dealer. Loudermilk receives the alerts, too. Modern telemetry keeps his over-the-road drivers out of the office and out on the highway. He may not see a truck again until the 275,000-mile mark, but he doesn’t need to — he’s fully aware of everything that happens inside the cab, from mechanical issues to driver safety.

Hilco and TransSource help each other build and maintain the best vehicle we can, and we, in turn, share our knowledge with other folks in the industry. We try to be on the leading edge. That is what separates us at the top of the trucking fleet — having the best equipment for our drivers and community. ~ Jeff Loudermilk, vice president of maintenance

“Uptime Center is second to none for issues on the road,” Loudermilk says. “With GuardDog Connect, it’s invaluable.”

TransSource, Hilco’s local dealer, has been instrumental in the company’s success, Loudermilk says. They are not just vendors; they are partners. Together, they have created a corporate culture that remains cutting-edge, quality driven and customer-focused.

“Hilco and TransSource help each other build and maintain the best vehicle we can, and we, in turn, share our knowledge with other folks in the industry,” Loudermilk says. “We try to be on the leading edge. That is what separates us at the top of the trucking fleet — having the best equipment for our drivers and community. When one of our trucks drives through your community, it’s well-maintained and is using the latest technology on that equipment to be safe and efficient.”

Often, Loudermilk is among the first to know about Mack’s new projects. Hilco has served as a Mack test fleet since 2011, so they get to try next generation engines, software and components before anyone else.

When the first mDRIVE became available, Loudermilk was already an enthusiastic convert, vowing that future purchases would feature the automated manual transmission.

After all, his fleet had spent months testing the mDRIVE. He knew how it alleviated driver fatigue and increased fuel savings. He knew how it made for smoother, more efficient turns. And there was another advantage, too: Switching to the mDRIVE widens the pool of potential new drivers, many whose sole experiences have been with automated transmissions.

Today, more than 60 percent of his Macks use the mDRIVE, and he is closely watching Mack’s 2017 lineup, which continues the company’s dedication to reducing greenhouse gas emissions without throttling power.

“It appears Mack is going to be a leader over the next few years,” Loudermilk says. “We like what we’re seeing and think it’s a great improvement — a step in the right direction.”

Hilco also anticipates continued growth, but no matter how big the family-owned company becomes, some things will remain the same. Safety will always be paramount, with the company taking advantage of every safety feature available, from collision avoidance to adaptive cruise control, blind spot detection, side view cameras and extra mirrors. Employees will still be expected to wash their trucks every other week, whether they are away from home or on the road.

And the bright yellow trucks — officially known as “Big Bird Yellow” — will continue to roll.