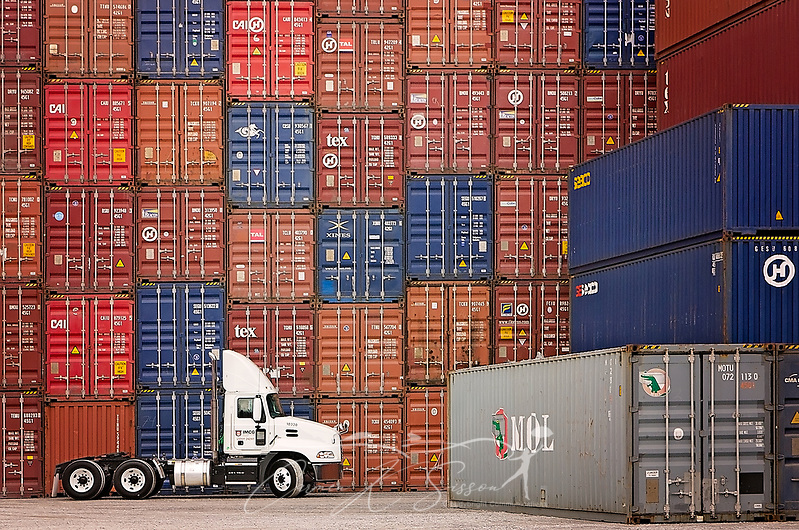 A 2018 Mack Pinnacle parks in front of a stack of storage containers at Intermodal Cartage Company, March 9, 2017, in Memphis, Tenn. ICMG, which specializes in container drayage. (Photo by Carmen K. Sisson/Cloudybright)

MEMPHIS, Tenn. — Shipping containers fill the yard at Intermodal Cartage Company, with the multicolored steel stacks towering over the heavy-duty Mack® Pinnacles® waiting to carry them to their destinations.

Intermodal drayage is a tough application and requires suitably tough trucks. Most loads fall inside the standard 80,000 pound GCW limit, but some require special permits to carry more.

The Mack Pinnacle models have proven more than capable, says IMCG maintenance director Rick Seawright. Five years ago, the company purchased four model year 2012 Pinnacles for a trial. After years of issues with other manufacturers, the Macks’ reliability was a pleasant surprise, says their salesman, Todd Garley of Tri-State Truck Center in Memphis.

As the five-year mark approached, IMCG began pushing the trucks even harder, letting their incoming, less experienced drivers get behind the wheel of the 2012 Pinnacles.

“Even in that situation, they didn’t encounter the mechanical failures that had become habitual,” Garley says. “They were used to having downtime with other manufacturers and having to have backup trucks. I think they were waiting for the other shoe to drop. It’s amazing what you can become used to when it becomes your norm.”

Those four trucks are still running strong today, and in December, IMCG took delivery of 90 additional Pinnacles. Eventually, they expect to replace the majority of their 250-truck fleet with Mack.

“The Macks we’ve had over the past five years rarely have to go back to the dealer,” Seawright says. “The uptime is a big plus. Their systems run. They don’t stay in the shop.”

Dependability has improved by 15 to 20 percent, estimates ICMG president Joel Henry, and he expects the new trucks will yield a 3 to 4 percent cost savings per year.

The latest Pinnacles have 13-liter MP®8 415 hp engines with 1,650 lb.-ft. of torque and are spec’d with mDRIVE™ automated manual transmissions — but specs are only part of the picture.

The Macks are heavier duty than other brands, Seawright says, making a 415 hp engine outperform another manufacturer’s 430 hp engine.

“Our application of the truck is tough,” he says. “We go through lots of unimproved areas and gravel yards. It’s tough on suspension. That’s why you see so many Macks used as dump trucks — there’s a reason for that.”

Thanks to the mDRIVE, all that power doesn’t equal increased fuel consumption. Instead, the 12-speed, two-pedal automated transmission saves money, Seawright says. With no clutch pedal or shift lever, the mDRIVE shifts the same every time, automatically selecting the best gear for the conditions and bringing their lowest drivers’ fuel economy average in line with their best drivers’ average.

While some drivers were averaging in the low 5 mpgs, most are now averaging 6.7 mpg.

And the mDRIVE saves money in another way, too — maintenance and repair. With other transmissions, burned-out clutches were a frequent headache, averaging as much as $2,500 per repair. The upgrade to the mDRIVE transmission more than pays for itself, Seawright says. Even the small savings can add up, and that’s one thing companies tend to overlook, Garley says. With their other trucks, they were constantly having to replace interior parts like knobs, dash trim and door handles. That, too, is a thing of the past.

If the trucks do have problems, which are rare, GuardDog™ Connect is on the job, often alerting drivers and calling in a maintenance request before the driver even knows there is an issue.

The new trucks also come with advanced technologies and more safety features. Seawright is particularly impressed with Mack Predictive Cruise, which uses GPS to memorize a route when the cruise control is engaged and stores up to 4,500 hills in its memory. The next time the driver travels that route, the mDRIVE will remember the topography and choose the most fuel-efficient gear, hill after hill.

It all adds up to a safer, more fuel-efficient vehicle, but there is another major benefit — drivers are happier, and recruitment and retention is better than ever. Keeping good drivers is an industrywide challenge and IMCG is no exception.

“Driver retention is a big issue,” admits Joel Henry. IMCG currently has a significantly better retention rate compared to the overall industry, but he believes his new Macks will make that number even better.

“Mack has a very good reputation for safety and good brand recognition with drivers,” he says. “Drivers like the Mack. We have a better product and a safer unit.”