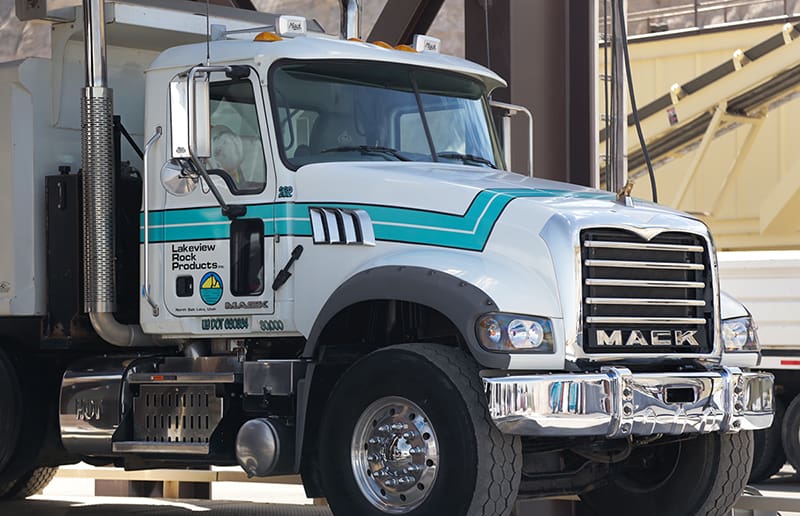 Located in North Salt Lake, Utah, Hughes’ company operates a number of quarries and provides sand, gravel and aggregate materials for use in everything from roads to park trails. Hughes General Contractors serves as the building and heavy construction arm and their latest division, Lakeview Asphalt, provides hot mix asphalt to paving contractors along the Wasatch front.

They’re tough trucks, and they can handle anything we throw at them. They fit the rugged construction environment. ~ Scott Hughes, president of Lakeview Rock Products

Hughes keeps his 14 Mack trucks working hard between the three divisions. His Mack Titans and Granite®models are spec’d from 454 to 605-horsepower, with 1,650-2,060-lb.-ft. torque and are subject to particularly harsh conditions. That’s why Hughes trusts Mack.

“They’re tough trucks, and they can handle anything we throw at them,” Hughes says. “They fit the rugged construction environment. We have to keep the wheels rolling through severe winters and brutal hot summers. We’ve got mud and snow and dust, but our Macks have held up well for us over the years. They’re good at hauling heavy in boggy conditions.”

That reliability and durability is important, and it has helped the companies develop a 90 percent repeat customer record.

“People like us when we start to work for them, and they love us when we’re done,” Hughes says with a laugh.

They are also one of only three companies in the northwest — and only 14 in the nation — certified in architectural tilt-up concrete ­construction.

The family-owned company, established in 1952, has transitioned well throughout the years, always staying a step ahead of trends as well as market sentiment. During the economic downturn, they flourished due to their already lean business model.

“We’ve always been a very conservative, close, family-owned business,” Hughes says. “When the economy took a hit, we didn’t have to change course. When the belt got tight, we already had a tight belt. We actually grew through the downturn and stayed busy. Our last job gets us the next job.”

When the economy took a hit, we didn’t have to change course. When the belt got tight, we already had a tight belt. We actually grew through the downturn and stayed busy. Our last job gets us the next job. ~ Scott Hughes, president of Lakeview Rock Products

Johnson says he works closely with Hughes to make sure he is getting the trucks he needs.

“Hughes listens to his customers and observes trends at industry trade shows, and we usually sit down and figure out if we can work that into his business model,” Johnson says. “We try to deliver trucks that are as light-weight as they can be and make them look good without being too showboat or too shiny. The equipment looks both professional and good-looking.”

And that’s exactly the way Hughes wants them. After all, his Macks are the “face” of the company.

“We try to keep our trucks clean and well-maintained, because they are a driving billboard,” Hughes says. “All of our trucks are easily identified. You can see them from a distance and immediately know they are our trucks.”